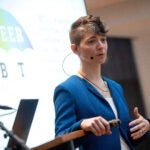 Before its collapse, Lehman Brothers Holdings Inc. — infamous for being the only company to declare bankruptcy during the 2008 financial crisis — had touched almost every sector of the American economy.

Looking at its primary business records, the majority of which are at the Baker Library of Harvard Business School (HBS), it’s easy to trace the firm’s influence on a wide array of industries in its 150-year history, from retail and film to aviation and technology. The documents show everything from Lehman’s business transactions to its stock certificates, and make clear just how broad a reach the company had in national and global business.

Many of these documents are on display in a new exhibit at the library, “Lehman Brothers: A History, 1850–2008,” that looks at firm’s wide reach as it went from small and family-run to the fourth-largest investment bank in the U.S.

The materials, on display in the library’s north lobby until July 12, are part of a treasure trove of historical collections focusing on the evolution of business. The library holds one of the world’s most extensive collections of business and economic history; it spans eight centuries and contains more than 180,000 rare books, 186,000 annual reports, 48,000 linear feet of archives and manuscripts, and 200,000 photographs. Together, these documents help shine a light on theories, organizations, and individuals that shaped the business world while also supporting research in a number of nonbusiness fields, including social history, science, and technology.

“Though our collections cross multiple centuries, there are themes that are reflective throughout them,” said Laura Linard, senior director of special collections. “You can see the patterns.”

Materials from the collections, available for use in the de Gaspé Beaubien Reading Room, are often brought out for exhibits about how important figures in business influence world affairs. The current exhibit, along with chronicling the history of Lehman Brothers, also shows the role investment banking played in the growth of the U.S. economy and how it helped launch industries that have changed history.

“Clearly the focus and the way everyone remembers Lehman Brothers is as the only company that went bankrupt in the 2008 financial crisis,” Linard said. “But there’s a theme that happens with Lehman throughout, where what they were doing is recognizing the potential in emerging industries. They’re offering banking and financial services to these industries that are still considered potentially risky. When you look at Lehman, you can look at the development of business in the United States.”

One of the biggest industries Lehman Brothers influenced was retail. Through a 1927 book by a partner at the firm, Lehman Brothers set the standard for how department stores are organized. The book, “Principles of Organization Applied to Modern Retailing” by Paul Myer Mazur, become a textbook in business schools throughout the U.S., including HBS.

With its investments, Lehman often displayed an ability to foresee which then-novel industries would develop into mainstream successes. The firm invested early in Paramount Pictures, Pan American Airways, and IBM.

This isn’t the first exhibit at Baker Library to tap into current financial events. During the financial crisis, the library looked at previous economic crises and what could be learned from them. In 2010, as personal borrowing gained more media spotlight, the library looked at how the credit industry moved from the fringes of the economy to its center. And in 2012, as China’s economy expanded, the library explored American entrepreneurs doing business in China as early as the mid-1800s.

Other recent exhibits focused on the emergence of world-changing inventions — a 2017 show featured items from the library’s 1.5 million­–object Polaroid Corp. collection — and highlighted historic moments, such as last year’s exhibit on the African-American experience at HBS from 1915 to 1990 and the formation of the African-American Student Union in 1968.

Two of the neatest special-collections displays at Baker Library are economist Robert C. Merton’s 1997 Nobel Prize medal (the first for an HBS faculty member) and a desk from the First National Bank of New York (now Citibank) that belonged to HBS’s earliest benefactor, George F. Baker, who was the bank’s president. His gift funded the construction of the HBS campus in 1924.

Other small displays relate to HBS history and business history in general. Two of the most notable are a bronze bas relief commissioned for an exhibit in the 1939 New York World’s Fair and a trading desk from the New York Stock Exchange.