The ‘spiritual leader’ of WHRB 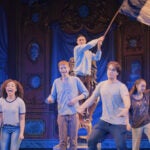 David Elliott, a guiding spirit at Harvard radio station WHRB for generations, died on Thursday, Nov. 12, at age 78 from complications of amyotrophic lateral sclerosis. Shortly after he stepped away from the station because of illness, the Gazette last year wrote about his life and times, below. (In the weeks ahead, WHRB plans memorial programming and services in his honor.)

Like so many others who work at Harvard’s student radio station, WHRB (95.3 FM), Xilin Zhou ’20 knew that whenever she took on a new challenge she could turn to David Elliott ’64 for advice on how to do it well.

For almost 60 years, Elliott has been a force and a fixture at the station. He mentored students, counseled leadership, chaired its board of trustees, curated music programs, enriched signature programs, anchored live broadcasts, and sold advertising. His accomplishments at WHRB, which was founded in 1940, are open ended, and he has often been center stage for the station’s most significant moments, including its expansion online and through mobile streaming.

But since Elliott stepped back in November to undergo treatment for amyotrophic lateral sclerosis (ALS), what many say he will most be remembered for is helping the station establish a standard of excellence and for mentoring students to carry on that legacy.

“Because David was there and because he was so invested in the culture and identity of the station, a lot of people were able to understand what it meant to respect music and what it meant to respect the cultural institution we were becoming a part of,” said Aaron Fogelson ’19, a former station president. “In a lot of ways, he was almost a spiritual leader of how the station should be.”

Because of his long tenure there, Elliott knew the station better than anyone else. He knew its history and had a strong sense of how the station should fulfill its purpose not only of offering music, culture, and educational information for the public, but also of benefiting the student staff who put it together.

“He really cared about the station as a family,” Zhou said. “He thought a lot about the students and really wanted the station to be a chance for them to explore new things, to be creative, and to learn.”

Much of this showed in how he mentored students, instilling in them the values and work ethic for which he was known. When Zhou anchored one the station’s special programs, Elliott not only helped her curate playlists and decide what to say about each piece, he also imparted his reasoning behind his decisions, along with choices he made for his own programs.

Kiran Hampton ’20, the current WHRB president, recalls how Elliott’s mentorship gave students the essential skills to succeed at any station, regardless of content. “WHRB ran, for example, one of the first great hip-hop shows on the East Coast,” Hampton said. “Obviously, that wasn’t necessarily David Elliott’s personal musical cup of tea, but he was able craft students who both had the ability to pursue their own interests and the … technique and attention to detail — and the attention to the listener — that characterized his personal programming.”

WHRB has been on the air for nearly 80 years. In the 1940s, it transmitted to Harvard dormitories only. In the 1950s, the station obtained an FM license and began broadcasting classical music, jazz, news, and sports to the entire Boston area. Today its lineup also includes hip-hop and underground rock. The station is entirely student-run and is overseen by a board of trustees.

“He presented really, really exceptionally high-quality opera content,” Hampton said. “Opera content that’s so good that I still get emails about it constantly from people who fondly remember David Elliott.”

What Elliott radiated more than anything else, however, was how much he cared for the station.

“He made everyone else care more because he demonstrated what it meant to care about an organization,” Fogelson added.

Because of that, his legacy at the station — through the culture he helped create and instill — will continue.

“David’s infectious devotion to WHRB has inspired thousands of students to excel and innovate on the listeners’ behalf,” said Jonathan Lehrich ’90, an associate dean at Boston University who was recently named the board’s new chair. “The station will continue to thrive, hearkening always to the ideals that David has exemplified.”