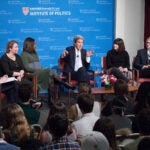 Harvard scientists say that low-carbon nuclear power may eventually gain greater support in the United States, suggesting that new, more economical plants could play an important role in the country’s energy production midcentury and beyond.

Beset by high construction costs and undercut by cheaper natural gas, wind, and even solar power, the nation’s nuclear fleet is struggling, with nuclear power producing about 20 percent of U.S. electricity today. Plant development is rare and economically risky, while the pace of retirements is increasing, driven by aging infrastructure and red ink.

Environmental fellow Michael Ford and climate scientist Daniel Schrag say those conditions are unlikely to change soon, but that the low-carbon power provided by nuclear plants may prove an important part of a future energy mix, one designed to fight climate change.

“Certainly right now, the existing fleet is struggling,” Ford said. “There are quite a few plants that are under market pressure, many early closings. … And if you pay any attention to attempts to deploy new nuclear in this country, efforts in South Carolina failed in 2016 and the Vogtle construction project in Georgia is something on the order of 100 percent over budget and years behind schedule.”

The central challenge, according to a paper Ford and Schrag published in October in the journal Nature Energy, is ensuring that acceptable technology — safe, cheaper, more efficient — is available to be deployed by midcentury, when market trends may again make nuclear power competitive with other sources.

At the moment, the main barrier for American nuclear projects is “the high price of new development and market economics, driven by cheap renewables and natural gas — combinations that are somewhat unique to the U.S.,” said Ford, whose doctoral work at Carnegie Mellon University focused on the state of the U.S. nuclear industry.

Ford and Schrag recommend that the U.S. government initiate a “tortoise” approach, investing in steady development of a range of advanced nuclear technologies, evaluating each so that the best option will be ready to go when need and market conditions arise.

“We believe the likely timescale for the demand for this technology is still at least a couple of decades away,” said Schrag, the Sturgis Hooper Professor of Geology, a professor of environmental science and engineering, and director of the Harvard University Center for the Environment.

In his work with the center, Ford, a retired Navy captain and nuclear engineer, has developed models of possible futures for the industry and is now creating a more detailed version of the proposal outlined in the October paper.

The industry itself has pinned its hopes on developing a generation of smaller, less-expensive reactors that could be built more quickly on site, he said. A number of companies are betting on new nuclear designs to get there — technologies that use substances other than water for cooling, such as liquid sodium or molten salts.

Ford and Schrag warn that there’s a risk in rushing ahead with a single advanced technology — what they call the “hare” approach — because it’s hard to know which of several options will work well enough to be deployable. In addition, whatever the technology, market conditions affecting nuclear power today are going to take decades to shift, they say.

“The idea of developing advanced nuclear like the Manhattan Project actually doesn’t fit the pace of the problem,” Schrag said. “What we’re trying to explain is that there are a sequence of steps in the decarbonization process [of the electricity grid], and absolutely we can accelerate them, but those steps are unlikely to change.”

Cheap and relatively clean natural gas will likely drive the closing of most of the nation’s coal-fired plants in the coming decades, Schrag said. At the same time, renewable power from wind and solar — both of which have become cheaper than nuclear in recent years — will likely take a larger share of the power grid.

Market conditions could shift in nuclear’s favor as the intermittent nature of wind and solar creates higher demand for new sources of support.

Though market conditions will initially favor natural gas in that role, gas is likely to become more expensive as demand increases, say Ford and Schrag, adding that pressure to include carbon capture technology could also boost the cost of electricity produced by natural gas plants.

“A new demand for nuclear power in the U.S. is likely to come only when natural gas is expensive or considered dirty or both,” Schrag said.

Ford and Schrag suggest that the U.S. direct research and development support to advanced nuclear designs and adopt a strategy that provides $200 million to $250 million annually to develop four or five promising technologies. Policy makers should also commit to providing additional funding — in partnership with industry — to demonstration plants that can scale up and test competing technologies, they say.

Schrag said the amount needed is relatively small in the context of overall energy spending, making it more likely to survive budget battles and swings in priorities between Republican and Democratic administrations.

Nonetheless, advanced nuclear won’t have a guaranteed spot in the nation’s energy mix, the scientists say. The industry would still have to compete with technologies such as carbon capture and large-scale battery storage.

“We’re saying nuclear needs to be an option, we’re not saying that nuclear has to win that competition,” Schrag said.