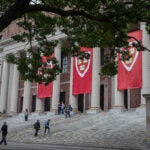 Faust’s groundbreaking scholarship has addressed questions central to American life and the human condition. A historian of the American South and the Civil War, she has transformed the understanding of the nation’s most devastating internal conflict, shining new light on how the efforts of those caught up in the crisis and its aftermath reshaped the nation.

“The reason I got so interested in the Civil War, moving from the antebellum South to the Civil War period in the focus of my research, is that it is a moment when people are confronted with the necessity of change and how they respond to that. What changes do they make, and what ones do they resist?” Faust told Harvard Magazine in 2007.

Faust is the author of six books, including “Mothers of Invention: Women of the Slaveholding South in the American Civil War” (University of North Carolina Press, 1996), for which she won the Society of American Historians’ Francis Parkman Prize in 1997. Her most recent book, “This Republic of Suffering: Death and the American Civil War” (Knopf, 2008), explores the Civil War’s unprecedented death toll and its effects on 19th-century Americans. It won the Bancroft Prize in 2009, was a finalist for both a National Book Award and a Pulitzer Prize, and was named one of the 10 best books of 2008 by the New York Times.

“Drew Faust is an eminent scholar of the Civil War and the American South, and one of the nation’s most admired historians,” said Harvard President Larry Bacow. “Her works, rendered in elegant and lucid prose, serve as exemplars of the craft of doing history through painstaking archival research and incisive analysis. With their close attention to issues of race, gender, identity, family, and other central elements of the fabric of American life, they reflect extraordinary insight into past lives and events while illuminating themes of continuing deep relevance to our national conversation.”

In June, the Library of Congress honored Faust’s work with the John W. Kluge Prize for Achievement in the Study of Humanity. The honor “recognizes and celebrates work of the highest quality and greatest impact that advances understanding of the human experience.”

Faust’s scholarly contributions were similarly acknowledged in 2011 when she was asked to give the annual Jefferson Lecture in the Humanities, sponsored by the National Endowment for the Humanities and the highest honor the federal government confers for distinguished intellectual achievement in the humanities. In her talk, delivered at the John F. Kennedy Center for the Performing Arts in Washington, D.C., Faust explored society’s fascination with war throughout time and spoke of “this struggle between the impossibility and necessity of communicating war’s truths.” She said, “As we continue to be lured by war, we must be committed to convey its horrors. We must make it our work to tell a true war story.”

Faust holds several honorary degrees, including honorary doctorates from Yale University, Princeton University, and Oxford University. She has received numerous awards, including the U.S. Navy’s Distinguished Public Service Award (2013), the Boston Chamber of Commerce’s Pinnacle Award (2014), and the Massachusetts Historical Society’s John Godman Ropes Award in Service to History (2018). She was elected to the Society of American Historians in 1993, the American Academy of Arts and Sciences in 1994, and the American Philosophical Society in 2004.

Faust came to Harvard from the University of Pennsylvania in 2001 as the founding dean of the Radcliffe Institute for Advanced Study. Her leadership at Radcliffe helped transform the former college into one of the world’s foremost centers for interdisciplinary research, study, and scholarship.

In 2007 Faust began her 11-year run as Harvard’s president. Early on, she shepherded the University through the 2008‒09 financial crisis. Throughout her presidency, Faust championed efforts to create more effective collaborations among the University’s many parts, in both academic and administrative domains. She expanded financial aid to improve access and opportunity for students of all economic backgrounds, advocated for increased federal funding for scientific research, worked to return ROTC to campus, and oversaw a record-breaking $9.6 billion capital campaign.

She also sought to foster greater inclusion and diversity among students, faculty, and staff, to integrate the arts more fully into campus life, and to promote innovation in learning and teaching, including the launch of edX, an online learning partnership with the Massachusetts Institute of Technology.

The University Professorships were created in 1935 to celebrate “individuals of distinction … working on the frontiers of knowledge, and in such a way as to cross the conventional boundaries of the specialties.” Faust joins 24 other Harvard faculty members who currently hold such a professorship.