Playing The Game, both past and present 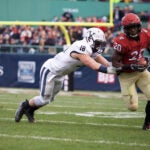 Harvard takes the field at Fenway and beats Yale, 45-27

In the 135th edition of The Game, the Harvard football team pulled away from Yale in the fourth quarter to earn a decisive victory, 45-27, at historic Fenway Park. It was the first time since 1894 that Harvard and Yale met at a neutral site. It also marked the 50th anniversary of the 1968 game memorialized in the headline “Harvard wins, 29-29.” That had certainly felt like a Harvard win, as the Crimson scored 16 points in the final 42 seconds to tie the score.

This game was also tied at several junctures, at 14-14 and again at 21-21, before Harvard fought back to retake the lead for good, scoring 17 points in the fourth quarter. Receiver Henry Taylor ’19 and running back Devin Darrington ’21 scored two touchdowns each, while captain Zach Miller ’19 hauled in two interceptions to lead the defense.

Dozens of players from the 1968 game, both Harvard and Yale, received a standing ovation as they stood on the field at halftime. The joyous looks on their faces as they reconnected with teammates and opponents from half a century ago were a strong testament to the enduring legacy of this historic rivalry.