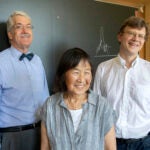 For bees, being social is everything.

Whether it’s foraging for food, caring for the young, using their bodies to generate heat or to fan the nest, or building and repairing nests, a bee colony does just about everything as a single unit.

While recent studies have suggested exposure to pesticides could have impacts on foraging behavior, a new study, led by James Crall, has shown that those effects may be just the tip of the iceberg.

A postdoctoral fellow working in the lab of Benjamin de Bivort, the Thomas D. Cabot Associate Professor of Organismic and Evolutionary Biology, Crall is the lead author of a study that shows exposure to neonicotinoid pesticides (the most commonly used class of pesticides in agriculture) has profound effects on a host of social behaviors.

Following exposure to the pesticide, bees spent less time nursing larvae and were less social than other bees. The bees’ behavior was observed using an innovative robotic platform, which also showed that exposure impaired bees’ ability to warm the nest, and to build insulating wax caps around the colony.

The study is described in a Nov. 9 paper in Science.

“These pesticides first came into use around the mid-1990s, and are now the most commonly used class of insecticide around the globe,” Crall said. “Typically, they work through seed treatment — high concentrations are dosed on seeds, and one reason farmers and pesticide companies like these compounds is because they are taken up systemically by the plants … so the idea is they provide whole-plant resistance. But the problem is they also show up in the pollen and nectar bees are feeding on.”

Over the past decade, Crall said, a number of studies have linked pesticide exposure with disruptions in foraging, “but there were reasons to suspect that wasn’t the whole picture.”

“Foraging is only a part of what bumblebees do,” Crall said. “Those studies were picking up on the important effects these compounds were having on what’s going on outside the nest, but there’s a whole world of really important behaviors going on inside … and that’s a black box we wanted to open up a bit.”

To do that, Crall and colleagues developed a unique, benchtop system that allowed them to track the activity of bees in as many as a dozen colonies at a time.

“What we do is put a black-and-white tag with a simplified QR code [barcode], on the back of each bee,” he said. “And there’s a camera that can move over the colonies and track the behavior of each bee automatically using computer vision … so that allows us to look inside the nest.”

Using the system, Crall and colleagues were able to dose individual bees with the pesticide and observe the changes in their behavior — less interaction with nest-mates and more time spent on the periphery of the colony — but those experiments are limited in several important ways.

“One is physiological,” Crall said. “Even though we were giving the bees realistic doses of pesticide, drinking your daily allotment of coffee in five minutes is going to be different than spreading it out over the course of the day, so giving one big dose might not be totally realistic. The other important one is that a bee colony is a functional unit. It doesn’t make sense to treat individuals, because what you’re losing when you do that is the natural social structure of the colony.”

With the robotic system, however, researchers can treat an entire colony as a single unit.

Each of the system’s 12 units, Crall said, houses a single colony where bees have access to two chambers — one to mimic the nest and the other to act as a foraging space.

“That lets us do multiple, colony-level exposures, and to do continuous monitoring,” Crall said. “We think this is much closer to how their natural behavior works, and it also allows us to automate behavioral tracking across multiple colonies at the same time.”

Just as in earlier studies, Crall said, exposed bees showed changes in activity levels and socialization, and spent more time on the fringes of the nest, but the tests also showed that the results were strongest overnight.

“Bees actually have a very strong circadian rhythm,” Crall explained. “So what we found was that, during the day, there was no statistically observable effect, but at night, we could see that they were crashing. We don’t know yet whether [the pesticides] are disrupting circadian gene regulation or if this is just some, maybe physiological feedback … but it suggests that, just from a practical perspective, if we want to understand or study these compounds, looking at effects overnight matters a lot.”

Additional experiments, in which temperature probes were placed inside outdoor hives, suggested pesticides have profound effects on bees’ ability to regulate temperatures in the nest. 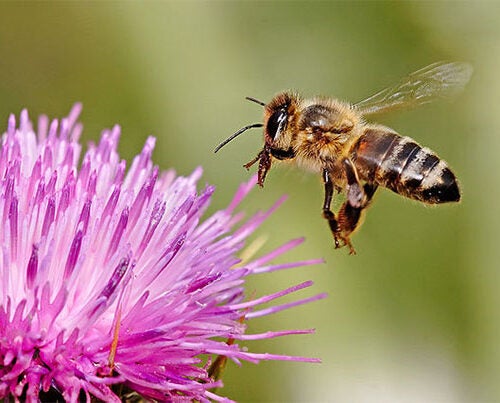 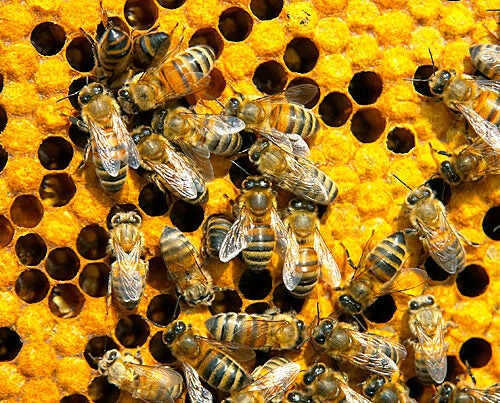 “When temperatures drop, bees lock their wings down and shiver their muscles to generate heat,” Crall said. “What we found was that, in control colonies, even as the temperature fluctuated widely, they were able to keep the temperature in the colony steady to within a few degrees. But the exposed bees, they pretty dramatically lose the capacity to regulate temperature.”

The experiment also revealed that pesticide exposure impacted bees’ ability to build an insulating wax cap over the colony.

“Almost all of our control colonies built that cap,” Crall said. “And it seems to be totally wiped out in the pesticide-exposed colonies, so they lose this capacity to do this functional restructuring of the nest.”

Going forward, Crall said, there are some additional questions the study raised that he hopes to address.

“This work — especially on thermoregulation — opens up a new set of questions, not just about what the direct effects of pesticides are, but how those pesticides impair the ability of colonies to cope with other stressors,” he said. “This work suggests that, in particularly extreme environments, we might expect the effects of pesticides to be worse, so it changes both how we go about practically testing agrochemicals in general, but it points to specific questions about whether we might see stronger declines in certain environments.”

Taken together, Crall believes the findings point to the need for tighter regulation of neonicotinoids and other pesticides that may be impacting bees.

“I think we’re at a point where we should be very, very concerned about how the ways in which we’re changing the environment are undercutting and decimating insect populations that are important not only for the function of every ecosystem … but that are very important for food production,” he said. “Today about a third of food crops are dependent on pollinators, and that’s only rising. Up until now, we’ve had this abundant, natural gift of pollinators doing all this work for us, and now we’re starting to realize that isn’t a given.”