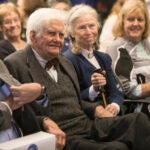 For decades, scientists have viewed the brain as a veritable black box — and now Catherine Dulac and Xiaowei Zhuang are poised to open it.

Dulac, the Higgins Professor of Molecular and Cellular Biology and Lee and Ezpeleta Professor of Arts and Sciences, and Zhuang, the David B. Arnold Jr. Professor of Science, are the senior authors of a new study that has created a first-of-its-kind cellular atlas of an important region in the brains of mice.

Using a cutting-edge imaging technology, Dulac, Zhuang, and colleagues examined more than 1 million cells in a 2-millimeter-by-2-millimeter-by-0.6-millimeter block of brain, and not only identified more than 70 different types of neurons, but also pinpointed where the cells were located and their various functions. The study is described in a Nov. 1 paper in Science.

“This give us a granular view of the cellular, molecular, and functional organization of the brain — nobody had combined those three views before,” Dulac said. “This work in itself is a breakthrough because we now understand several behaviors in ways that we never did before, but it’s also a breakthrough because this technology can be used anywhere in the brain for any type of function.”

The study grew out of a desire to address what Dulac called a fundamental biological problem and a technological challenge that comes with it.

“The problem is that people realized quite a while ago that, in order to study the brain, you need to understand its components, and those components are the cells,” she said. “So if you take a piece of tissue and look at the genes expressed by the cells, that tells you how many cell types there are … but that still leaves you with a big problem.”

That problem, she said, is that such techniques require researchers to disassociate cells from the tissue, and in the process they lose an invaluable piece of information — how the cells were organized in the tissue.

“If you really want to understand the brain, you need the spatial context, because the brain is not like the liver or other organs, where the cells are organized in a symmetrical way,” Dulac said. “The brain is unusual in that it has this topological arrangement of neurons … so we want to be able to look at a section of the brain and see what cells are there, but also where they are and what types of cells are surrounding them.”

Following her development of STORM, a super-resolution imaging technique that allowed researchers to image individual molecules with nanometer-scale resolution, Zhuang set her sights on imaging not just single types of molecules, but all of the molecules at work in the cell.

“We don’t have just one or two different kinds of molecules in our cells; we have thousands to tens of thousands of genes that are expressed to make the molecular machinery that give cells their function,” she said. “I wanted to be able to image all those genes simultaneously, that’s why we developed MERFISH.”

The MERFISH method works by assigning “barcodes” to the cell’s RNAs, hybridizing them with a library of DNA probes to represent these barcodes, and then reading them out by imaging to determine the identity of individual RNA molecules. Numerous different barcodes are read out simultaneously through multiple rounds of imaging.

“An amazing property of this method is the exponential scaling between the number of genes that can be imaged and the number of imaging rounds,” she said. “If you wanted to look at 10,000 genes, you could try the brute-force approach and do it one at a time, but of course no one would ever try that. The MERFISH approach is very powerful because it allows us to image and distinguish thousands of different RNAs in just about 10 rounds of imaging.”

Zhuang and colleagues built an error-correction method into MERFISH in an effort to ensure the barcodes would be read correctly. Rather than using all possible barcodes, in which a single error could cause one code to be misread as another valid code, the team selects a subset of barcodes that can only be misread if multiple errors occur simultaneously, dramatically reducing the chance of misidentifying a gene.

“One of the main applications that we invented MERFISH for is to identify cell types in situ because different cell types have different gene-expression profiles. Hence, these gene-expression profiles provide a quantitative and systematic way for cell-type identification,” Zhuang said. “And because we can do this in intact tissues by MERFISH imaging, we can provide the spatial organization of these cell types, too.”

Armed with MERFISH, Dulac, Zhuang and colleagues set about tackling those fundamental biological questions that have long plagued scientists attempting to understand how the brain works.

“If you really want to understand the brain, you need the spatial context, because the brain is not like the liver or other organs, where the cells are organized in a symmetrical way.”
— Catherine Dulac

“There are areas in the brain that have been studied, like the cortex, where people noticed that cells were organized in a particular way, but there are a lot of brain areas for which we don’t know the principles of organization,” Dulac said. “The area we looked at in this study, the hypothalamus, is absolutely essential for many functions … it controls things like thirst, feeding, sleep, and social behaviors like parenting and reproduction, but we don’t know how this structure is organized.”

To unravel that mystery, Dulac and Zhuang combined MERFISH with another method called single-cell RNA sequencing, which allows unbiased quantification of gene expression profiles for cells. “This not only allowed the cell types to be cataloged in the hypothalamus, but also provided molecular signatures of these cell types and facilitated the selection of gene panels for MERFISH imaging,” said Zhuang.

Based on these molecular signatures and other genes of functional importance, they used MERFISH to simultaneously image more than 150 genes throughout the preoptic region of the hypothalamus to identify cell types in situ and create a spatial map of where cells were located.

“Both scRNAseq and MERFISH enabled us to identify around 70 different neuronal subtypes, most of which were previously unknown” said Zhuang, “and MERFISH imaging allowed us to additionally see the spatial distributions of all 70 neuronal types, as well as those of the non-neuronal cell types.

“What you can see is that there is an exquisite spatial organization — it leaps right out at you,” Zhuang said. “You can see which neurons are neighboring each other … and not only that, but because our images are molecular, you can identify how these cells are communicating with each other. Moreover, because MERFISH imaging has a very high sensitivity, we were able to identify lowly expressed genes that are critical to cell function.”

With that information in hand, the team set out to link specific cells with specific behaviors, and the solution came in the form of a gene called c-Fos, Dulac and Zhuang said.

Known as an “immediate early” gene, c-Fos transcription is increased during neural activity, Dulac said, so if researchers are able to track which cells show increases in the gene, they can identify cells that are activated during particular behaviors.

“So we allow an animal to perform some behavior — like parenting, for example — and when we look at which cells are c-Fos-positive, we know only those cells are part of the parenting behavior,” Dulac said. “But thanks to MERFISH, we know which genes are expressed in those cells.

“So we can define which cells are involved in a particular behavior in ways that we could not before,” she continued. “This is extraordinarily precise, extremely quantitative, and we can see where those cells are … so it’s a cellular map, a molecular map, and a functional map, all together.”

In addition to parenting, Dulac, Zhuang, and colleagues identified cells responsible for other behaviors, including aggression and mating, and while they found surprising commonalities, there were also intriguing differences depending on whether mice were parents or virgin males or females.

Going forward, Dulac and Zhuang hope to further explore the structure of the hypothalamus, including devising ways to better understand how cells are connected to one another.

As significant as the study’s findings are, both Dulac and Zhuang said the work should also serve as an example of the power of collaboration.

“This is really the best collaboration one could hope for,” Zhuang said. “Ours are two labs whose expertise complement each other very well, and we both learned a great deal from each other. At this point, we feel like we know quite a bit about the hypothalamus, and likewise Catherine’s lab knows a great deal about MERFISH imaging, so this has been a truly exciting, rewarding process.”