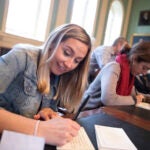 Michael Thomas Jr. makes a strong argument for rewards of his role as publication’s 132nd president

On a March evening, Michael Thomas Jr. gave a special tour of Gannett House to his dad and two brothers, who were visiting to see the place where Barack Obama, J.D. ’91, first made national headlines.

In 1990, Obama became the first black leader of the Harvard Law Review, which was founded in 1887 and is based at Gannett House. Thomas’ relatives delighted in seeing traces of Obama in the building, including a group photo of editors with the future president in the center.

But they were also there to celebrate Thomas, who had recently become the third African-American man to be elected president of the esteemed legal journal.

“My family didn’t understand the significance of it, at first,” Thomas said in an interview. “I don’t have lawyers in my family. When I told them that Obama had been president of the Law Review, they were very happy for me.”

Born in the Caribbean state of St. Vincent and the Grenadines and raised in Brooklyn, N.Y., by working-class parents, Thomas, J.D. ’19, is the fourth African-American to head the Review. The second was David Panton, J.D. ’95, who was born and raised in Jamaica. The third was Imelme Umana, J.D. ’18, the first black woman to hold the position. African-Americans account for roughly 7 percent of the more than 1,700 students currently enrolled at Harvard Law School (HLS).

Edited and managed by students, the Review publishes cutting-edge legal articles written by professors, judges, and practitioners, and serves as both a research tool for attorneys and a means for student-editors to sharpen their research and writing skills. Among the publication’s alumni are Supreme Court justices, attorneys general, cabinet secretaries, and government officials.

Students apply to become editors of the Law Review at the end of their first year at HLS and are chosen through a combination of grades and scores in a writing competition. Every year, 92 student-editors elect their president.

Thomas views his post mainly as a rewarding learning experience. As the 132nd president of the Review, he will oversee the publication of articles from November through June.

“It’s been incredibly humbling and fulfilling,” Thomas said of his role. “I love my classes, I love going to school here, but in terms of where I’ve learned the most and the fastest, it has definitely been on the Law Review.”

In 1922, Charles Hamilton Houston, J.D. ’23, the architect of the strategy that ended legal segregation in public schools, became the first black student admitted to the editorial board of the Review. Since then, many African-American students have followed in his footsteps, noted Randall Kennedy, Michael R. Klein Professor of Law.

“The fact of the matter is that for a while a substantial number of African-American students at Harvard Law School and other elite law schools have distinguished themselves and attained leadership positions, and Mr. Thomas is part of the tradition,” he said.

Thomas, who graduated from Princeton with a major in sociology in 2012, credits his academic success to his parents’ support and a series of mentors who pushed him to do his best, from a fifth-grade teacher who assigned his class to read 100 books in a year to his uncle, a college professor who made him write book reports and essays about current events during summer vacations in Maryland.

Law plays a big role in shaping everyday lives, said Thomas, who has a longtime interest in government and policy. “Our assumptions are often that zoning laws and municipal ordinances are natural, but they’re made by people who’re making decisions on who gets to live where and determining the way our world around us looks.”

At the Law Review, Thomas published an article on marijuana legalization informed by his experience navigating between his working-class neighborhood in Brooklyn and his Manhattan private school, and noticing the different ways in which the police dealt with marijuana possession.

“The consequences for being a kid aren’t the same in those two places,” said Thomas. “Now when marijuana is being legalized, wealthy white people will be making a lot of money off it, as poor black and Latino neighborhoods have been punished severely.”

But for now, he’s focused on his responsibilities at the Review, where he spends 40 hours a week reading and editing articles while working with his team to keep the publication on deadline.

“I don’t think too much about the future,” Thomas said. “I work as hard as possible on the things that are right in front of me.”