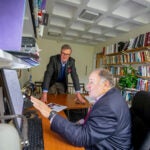 When Denis Mukwege was awarded the Nobel Peace Prize last month, the honor resonated at Harvard, far beyond the South Kivu hospital where the Congolese physician treats victims of wartime sexual violence.

The Harvard Humanitarian Initiative, which conducts research in international trouble spots in order to inform and improve humanitarian response, has long partnered with Mukwege in efforts to respond to sexual violence as a weapon of war in the eastern Democratic Republic of the Congo.

Nadia Murad, who shared the Nobel with Mukwege, also has links to Harvard, as winner of the initiative’s 2018 Weintz Humanitarian Award. A young Iraqi Yazidi and former ISIS sex slave, Murad has been outspoken in her determination to highlight the abuse she and many others have suffered.

The Gazette spoke with Director Michael VanRooyen about HHI’s efforts to treat and support victims of sexual violence, as well as his relationship with the Nobel laureates.

GAZETTE: When did you first meet Denis Mukwege and learn of his work?

VANROOYEN: It was in early days of HHI, probably 2006 or so. We had an interest in working in the Congo. [HHI visiting scientist] Jocelyn Kelly was beginning her work on women and war and gender-based violence at the hands of militias in the Congo.

At the time, Julie [VanRooyen’s wife, a surgeon] had spoken at a conference on urogenital fistula with Mukwege, who is also a pelvic surgeon. They hit it off and decided to work together. Julie started to develop a training program, funded by HHI, to take fistula surgeons from the United States and help Denis train his team at Panzi Hospital. Julie would send experienced, veteran pelvic surgeons. You can’t send residents or trainees because the cases are so complex and difficult.

GAZETTE: Why were the cases so complex?

VANROOYEN: Most fistulas occur because of obstructed labor, when women have tears that are not repaired or repaired appropriately. That can be the case here. But a lot of them had to do with sexual slavery. Women were abducted and then subjected to very violent forms of sexual abuse, including instrumentation, shooting in the pelvis, using sticks and roots and terrible stuff.

Panzi Hospital was the only place in the region set up to take care of these women, and Denis had very specialized expertise. Not only do these women need high-level operating rooms and anesthesiologists, but they need surgeons who can handle the most complicated pelvic trauma.

The social consequences were huge. When the women would return after this horrific treatment, they literally would leak all the time. So they were cast out of their homes and their families would make them sleep outside the house. So not only did they suffer this horrible injustice and abuse, but they were then ostracized from their community.

GAZETTE: How much research did you do in the eastern DRC and at Panzi?

VANROOYEN: We had a whole team that studied gender and conflict that did a ton of work at Panzi Hospital and in the region. The work sought to understand questions like: What was the distribution of women who were abducted? What were the dynamics? How were they perceived by health care providers? How were they worked back into the community? What were the barriers?

GAZETTE: Did any of the work help women reintegrate?

VANROOYEN: This was one of the times that we really decided that our primary motive was not writing a paper. Our primary motive was to drive policy changes and funding so they could get more resources at Panzi and more resources around community support, social support, transportation back and forth from the hospital, etc. So we were very active in the policy and advocacy fronts, based on that relationship with Panzi.

GAZETTE: Why shift from pure research to policy and advocacy? Because of the nature of the problem?

VANROOYEN: I’ve always felt — and this played out very starkly in this circumstance — that it is unethical to do research on very vulnerable populations without having a direct programmatic component that feeds back to them. In other words, these women were so vulnerable and so affected by the war that we felt the ethical responsibility was, if we were going to do research, to turn it into concrete policy change for these women.

GAZETTE: What can you tell me about your relationship with Denis?

VANROOYEN: We had recurrent visits to Panzi and visited Denis and his family. He’s a very warm, wonderful guy, so when we went to the Congo, we’d have dinner with Denis’ family. Then, when he would come here on a speaking trip — we hosted him here for a lecture series — he would come to dinner at our house and stay with us.

At one point, he had an assassination attempt on his life and he had to leave the country quickly and he came to Boston. We spent a lot of time with him then. So we got to know him and his wife and daughters well.

GAZETTE: Were there things that you learned from him personally?

VANROOYEN: He’s a great inspiration for a lot of people — many, many thousands of people — because of his work. I’ve always admired the people in global health and humanitarian aid who do the hard work in the field day in and day out. And Denis’ motive is not recognition. As a matter of fact, he’s probably uncomfortable with the recognition, but he uses it to get the mission, the voice of these women, through to a larger audience. And he’s clear about that.

So the thing that is really inspirational about him is just his absolute unwavering dedication to a cause that is important — he risks his life for it, literally. His entire pursuit is to advance the rights and the health of women affected in the Congo.

GAZETTE: To shift to the other Nobel laureate, Nadia Murad was speaking at HHI the night before she learned she’d won the Nobel Peace Prize, correct?

VANROOYEN: We gave Nadia the Weintz Humanitarian Award, an annual award we give to a prominent humanitarian leader who’s shaping the future of the humanitarian world. The next morning she was called and notified that she’d received the Nobel Prize.

It’s not an accident that a Nobel Prize that went to people who work in this field went to those we knew and worked with. They’re both very committed and very involved in the field and in humanitarian efforts involving the vulnerability of women. It’s our business. We research those areas, we work in those areas, so it’s not an accident that we would be familiar with and engaged with their work.

GAZETTE: What should the public take away from this? The importance of fighting sexual violence? Or of dedicating your life to causes like this?

VANROOYEN: First of all, these Nobel prizes were awarded to people who were very deserving of recognition, not because they sought it but because they were doing really deep, important work. People should have some degree of faith that this is not a political award. This is a really wise and thoughtful choice that highlights an issue that is absolutely critical, and that’s the plight of women in war. And the Nobel Prize is just recognition for what they would have been doing anyway.