From Harvard to the IMF 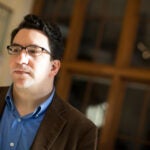 Lurking in your favorite song, the law

New chief economist Gita Gopinath reflects on the challenges ahead

Gita Gopinath, Harvard’s John Zwaanstra Professor of International Studies and of Economics, was appointed last month as economic counselor and director of research for the International Monetary Fund (IMF), becoming the chief economist of the powerful financial organization.

The role encompasses everything from helping determine financial assistance to countries to leading research by a vast department of economists. Gopinath’s appointment comes at an especially challenging time, as more countries are seeing a move away from globalization, and grappling with economic uncertainty. The Gazette caught up with Gopinath, who is also a faculty associate in the Weatherhead Center for International Affairs, to get her views on the biggest challenges facing the IMF today, what her priorities will be, and how she feels as the first woman in the job.

GAZETTE: What was your reaction when you found out you were being offered this position?

GOPINATH: I was thrilled and honored. There were two rounds of interviews, but everything went very quickly. And I was very touched by the kind words of Managing Director Christine Lagarde and more generally by the reaction from family, friends, and colleagues to the announcement. My parents were flooded with congratulatory messages, which was a nice feeling. This is a very exciting job for me, given the areas that I work in as an international macroeconomist. There is really no other place in the world where I can work with such a large number of highly qualified international macroeconomists, and that is a great source of excitement for me. So I was very pleased, and very honored because I know that there were other good people who could have been given the job.

GAZETTE: Could you tell us a little bit about the role, and what your responsibilities will be?

GOPINATH: In terms of the job itself, there are two main parts. One is director of research, which oversees a department with about 100 economists who provide intellectual leadership on important policy questions. The questions range from if and how countries should manage international capital flows to how do we address growing inequality. The second part is serving as an economic counselor, giving advice to senior management of the fund on broad policy questions but also on providing financial assistance to countries. So there is always the question of how do you formulate a package to a given country? What kind of program do you design for them? I’m really looking forward to providing advice on those sorts of questions.

GAZETTE: What are some of the biggest issues IMF is facing right now?

GOPINATH: The one that is absolutely clear and present is that we are seeing the first serious retreat from globalization. This has not happened in the past 50 or 60 years, when the world moved toward lower tariffs and increasing trade across countries. Over the past several months, we have the U.S.-imposed tariffs and retaliation to them from China and other nations. There is in general growing uncertainty about trade policy, including with Brexit [the British move to leave the European Union]. While trade has reduced global poverty and raised livelihoods, its consequences for inequality, and on whether the rules of engagement are fair, are real concerns that need to be addressed.

There is also a concern about whether we have the right multilateral institutions and frameworks in place to make sure everybody feels that there is fairness in trade. And the same goes for capital flows. Foreign direct investment [FDI] was always viewed very favorably by countries. But because most FDI is now in tech-heavy firms, there are growing concerns about national security and international property theft. So I believe this retreat from globalization and this retreat from multilateralism is quite unique to the times we are living in.

Another important concern is the health of emerging markets as the U.S. continues to normalize its interest rates. Capital flows to several markets have reversed, putting pressure on their exchange rates and consequently on inflation, and on balance sheets, given that several emerging markets borrow heavily in dollars.

GAZETTE: Could you talk more about Brexit and the trend away from globalization? Do you see this trend as still being on the rise, or has it peaked already?

GOPINATH: I’d like to think we are at a peak right now, but we might stay there for a little while. How soon will things de-escalate? That is far from obvious. And that itself is a problem because large amounts of uncertainty do not help with economic growth. We have plenty of evidence that when you have uncertainty about policy, there are significant negative consequences. There is a genuine concern that, even if things de-escalate now, they can get bad again quickly in the future, so there is no point at which we can say we have a permanent resolution.

At this time a year ago, the world was actually in a very nice sweet spot. For the first time since the financial crisis, advanced markets, developing countries, and emerging markets were all growing and doing better than they had in the previous year. So the expectation was that 2018 would be a good year for the world economy. It is interesting to see how that changed so quickly over the last six months. We now have the phenomenon of a great divergence between the U.S., which has been growing fast, and the rest of the world. So while Europe seemed like it had recovered, things have been slowing down. Emerging markets have taken a big hit across the board — both oil-producing and oil-consuming countries have suffered. I believe we are looking at a period of sizable uncertainty and a period where the downside risks are significant.

GAZETTE: What do you think contributed to the shift away from a period of consistent growth in various markets to where we are now?

GOPINATH: A couple of things changed rather unexpectedly. Not many anticipated the severity of the trade conflicts in 2018. This has slowed growth in China, which, given its importance in world markets, has negatively impacted other countries. Secondly, commodity prices were expected to rise, but at a moderate pace. Geopolitical tensions in the world led to a sharp rise in commodity prices that was a negative shock for oil importers like India. The idiosyncratic problems in Argentina, Turkey, and Italy surfaced. What was expected was that the U.S. Fed would raise interest rates, and it has continued to do so in a predictable and gradual manner, but the new reality in terms of geopolitical tensions and escalation in trade conflicts has exacerbated the negative spillovers from these interest rate increases.

GAZETTE: What are some issues you are particularly interested in tackling in your new role?

GOPINATH: Well, first and foremost I would like the IMF to continue to be a place that provides intellectual leadership on important policy questions. The research department puts out the World Economic Outlook, which reports on the health of the world economy. It is a very important publication that is useful not just for policymakers but for people in all sectors.

Among the research issues that I would like to push, one would be understanding the role of dominant currencies like the dollar in international trade and finance. We could do more on the empirical side to try to understand countries’ dollar exposures, and on the theoretical side in terms of the implications for international spillovers, consequences of dollar shortages, etc. Most countries invoice their trade in dollars and borrow internationally in dollars. This is a central part of the international price system and the international financial system, and it will be exciting to explore its consequences in greater depth with the IMF.

GAZETTE: You’ve taught economics at Harvard since 2005. How has your time here helped prepare you for this role?

GOPINATH: On the research side I have benefited immensely from speaking to and collaborating with my colleagues. We have phenomenal people here. The critical thinking and energy of this place is what I would like to take with me to the fund. Advising students on their theses has also been a very satisfying part of my job, and prepared me for some of the advisory work I will be involved in. More generally, a day for me at Harvard moves among research, teaching, advising, committee work, editorial work, and so on, which has prepared me for the multitasking I will have to do at the IMF.

GAZETTE: You’re taking a public service leave of absence to take on this new role, and Harvard hopes you will return when your work with the IMF is done. In the meantime, what will you miss most about the University?

GOPINATH: I will miss a lot about Harvard, certainly my colleagues and also the students. The students we have here are extraordinary, and teaching and advising them has been a wonderful experience. I benefit a great deal from advising students, many of whom are working on really creative solutions to large and complex problems. I will also miss being able to show up to work in my jeans!

GAZETTE: You are the 11th chief economist of the IMF, and the first woman in this position. What does that mean to you?

GOPINATH: It is a tremendous honor. It also speaks highly of Christine Lagarde. She is phenomenal, not just in her leadership of the IMF but as a role model for women around the world. There were strong and eligible women in high posts over the years, but I think you needed someone like Lagarde to make this decision. We have had similar challenges at Harvard. For many years there had been only two out of 40 tenured faculty in the Economics Department who were women. Last year we promoted three, so we went from two to five — still a small share of the total, but it’s moving in the right direction, and I think that’s great for the department. I should also add that my accomplishment would have been impossible without the support of my husband and son, to whom I am very thankful.