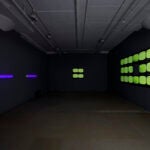 David Rothenberg ’84 lives on the brink of discovery.

A composer, Rothenberg takes the familiar sounds of birds singing, insects chirping, ponds bubbling, and combines them with music, creating a melodious and distinctly unique mélange from what others might hear as background noise — or miss entirely.

“Nature is just there, it shows up, but we are not always paying attention, so we don’t actually listen,” he said. “If you listen, you can hear amazing things.”

Whether he is recording the sounds of nightingales in Berlin, whales in the ocean, or cicadas that found their way onto his shirtsleeve, to Rothenberg the unconventional sounds are a door to a world of information.

“I always thought animal music should be something music students do,” said Rothenberg, a jazz clarinetist, composer, and professor of philosophy and music at the New Jersey Institute of Technology. “You should study these sounds that are millions of years old, the way they are put together, and figure out how they fit in now.”

Rothenberg grew up interested in math and science, but when he went to Harvard in 1980, he became absorbed in music, philosophy, environmental science, and “unusual things.” Some of his professors helped him learn to apply what he calls “mystical approaches,” or personally inspired approaches, to music. It transformed him.

“I was always looking for somewhere else to go, some other thing,” Rothenberg said. “I was in between disciplines until I graduated in 1984 so I actually created my own discipline — music and communication. Not communication in any technical sense, it was anthropology, literature, and spiritual things.”

“The Boori Sound” from“Nightingales in Berlin” features a nightingale, Rothenberg on clarinet, Lembe Lokk’s vocals, and Sanna Salmenkallio on violin. It was recorded in Viktoriapark, Kreuzberg, Berlin, in May 2017.

“The nightingale and mockingbird have the most interesting complicated musical songs — can you even quantify that?”
— David Rothenberg

Rothenberg grew up in Connecticut with parents who listened to classical music while he indulged his own penchant for jazz — not the jazz of the day by Miles Davis or John Coltrane, but obscure music by lesser-known artists.

“I am constantly looking for things off the map, for musicians who are a little different, and investigating them and celebrating them,” he said. “It’s the in between, the people who are less recognized who are more interesting.”

Never making determined career choices, Rothenberg followed his instincts until he firmly connected music and nature in the 1990s.

“I was into music, but this wasn’t planned out. I met people around the world interested in this,” he said. “I got interested in sounds I previously ignored and just decided to play music with birds and realized it was a whole new thing I should pursue.”

Since then, 16 albums, three books, a documentary film, and international acclaim have brought Rothenberg’s work to the front of contemporary sound. But the low pitch of crickets when it’s cold outside, or the sound blue jays make when they’re sleeping, are narratives that scientists have not yet learned to completely read, he said.

“Scientists have to measure things thousands of times and be objective,” he said, “But the nightingale and mockingbird have the most interesting complicated musical songs — can you even quantify that?”

Rothenberg believes the answer lies in perspective. Ask a biologist, a poet, a musician, a naturalist, a farmer, and a hunter-gatherer to describe the same bird and they will all say different things. He encourages people to listen to all of them — as well as what’s going on in their backyards. It may be interesting.

“There’s a sense of wonder and mystery to the nature sounds around us,” he said. “It’s not hard to hear these things, you just have to listen.”

Rothenberg will talk about the relationship between humans and nature, play his clarinet, and demonstrate “What Nature Sounds Are Music” at the Arnold Arboretum of Harvard University on Saturday, 2‒3:30 p.m. 125 Arborway, Boston. Registration requested. https://bit.ly/2CPUI5q