Lessons of the last financial crisis 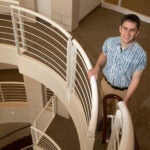 At Harvard, Niall Ferguson says a key going forward may be U.S.-China relationship

The last global financial crisis was just beginning when Niall Ferguson published his seminal book “The Ascent of Money” in 2008. He came to the Harvard Kennedy School on Wednesday to warn that history could repeat itself.

In an interview conducted by Graham Allison, the Douglas Dillon Professor of Government at the School, Ferguson recalled that just as he was making final revisions to the book, it became clear to him that the Lehman Brothers investment bank was about to fold and the crisis was soon to begin.

“I had to rewrite the introduction and the conclusion, changing the future tense to the present,” said Ferguson, formerly the Laurence Tisch Professor of History at Harvard and now a senior fellow at the Hoover Institution. The book broke the global financial system down into six main components: money, bonds, equity, insurance, housing, and globalization. “I presented the book as six stories, six reasons why the crisis was happening just as you were reading it.”

To understand 2008 fully, he said, one needed to look at how those six factors worked together. Of the common theory that the crisis happened because of deregulation, he said, “You should dismiss that as a cartoon.”

A new edition of the book will include two fresh chapters that look at the crisis and how it avoided turning into a second Great Depression. As Allison suggested, one saving grace in 2008 was applied history, specifically Federal Reserve chair Ben Bernanke’s studies of the 1930s disaster. “That’s a fantastic example,” Ferguson said. “Bernanke had studied the Great Depression, so as the crisis intensified he was in the position to identify and recognize the symptoms of something much bigger than anyone in the room had experienced in their lifetimes.”

Ferguson’s own Harvard students, he said, could have anticipated the choices that Bernanke would make. “If you had taken the class on financial history I was teaching at the time, you would have read Milton Friedman and Anna Schwartz’s ‘A Monetary History of the United States, 1867‒1960.’ And you would have known that the Fed [in 2008] would do exactly the opposite of what the Fed did during the Great Depression, because they did everything wrong the first time.”

“The breakdown of [China-U.S. financial relations] is bad news for the biggest corporations in the world, and that’s what I am keeping an eye out for.”
— Niall Ferguson

One of the main reasons another depression was avoided, Ferguson said, was the global component, namely the stimulus money the U.S. received from China. “If the U.S. had done everything it did and China had done nothing, things would have worked out very different,” he said. The alliance proved so pivotal that Ferguson termed it “Chinamerica,” a pun on “chimera,” since it was always a little mysterious. “The relationship survived the crisis despite some pretty nasty rhetoric; we called them currency manipulators. But China didn’t sell their great accumulation of U.S. bonds.”

China, he said, may well be the source of the next global crisis. “People have been predicting a China crisis on an annual basis for the past 15 to 20 years,” he said, and the decline of China-U.S. financial relations may prove the tipping point. “The breakdown of Chinamerica is bad news for the biggest corporations in the world, and that’s what I am keeping an eye out for. The best-case scenario is that China’s growth rate steadily declines. In the worst case, there is a crisis. Either way, the outlook is a somewhat bleak one.”

One ominous sign, he said, lies in the current political climate. “The Republican Party, in embracing [President] Trump’s populism, threw its fiscal responsibility out the window. Suddenly deficits don’t matter. This is a problem that is going to get serious relatively quickly. I find it hard to figure out what the politics will be when there is no credible fiscal conservative left.”

During audience questions afterwards, one student asked Ferguson if he’d neglected to mention the role of fraud and other white-collar crime in triggering the 2008 crisis. Ferguson replied that almost no bankers ever went to jail.

“Is that because we decided to turn a blind eye to white-collar crime, or is it because they committed no crimes, [they only] bent the rules? I think it’s the latter. It is really hard to get convictions when people were essentially complying with regulations,” he said.

But doing what’s strictly legal, he emphasized, isn’t the same as doing the right thing. “As long as they were compliant, nobody felt any compunction about doing things that were morally wrong, if not technically criminal.”