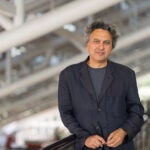 Mostafavi to step down as GSD dean

Seven Harvard scientists are among the 89 researchers who have been selected to receive grants through the National Institutes of Health’s High-Risk, High-Reward Research program, which funds innovative research designed to address major challenges in biomedical science.

“This program supports exceptionally innovative researchers who have the potential to transform the biomedical field,” said NIH Director Francis S. Collins. “I am confident this new cohort will revolutionize our approaches to biomedical research through their groundbreaking work.”

Amy Wagers seeks to change the way we repair our tissues after an injury.

Her research reveals how changes in stem cell activity impact tissue maintenance and repair throughout life and explores how these cells may be harnessed for regenerative medicine.

Wagers’ substantial contributions to science, published in more than 150 primary research and review articles, have brought to light novel regulators (both intrinsic and extrinsic) of stem cell activity in injury repair, degenerative disease, and malignancy, and highlighted key roles for specific blood-borne mediators, cellular niches, inflammatory and metabolic cues in coordinating the functions of stem cells and their progeny throughout the body.

She has also established groundbreaking methods for manipulating stem cell genomes in situ — work that opens new avenues of research and new possibilities for treating congenital and age-related diseases.

In addition to her work at the Harvard Stem Cell Institute, Wagers is a senior investigator in the section on islet cell and regenerative biology at the Joslin Diabetes Center and a member of the Paul F. Glenn Center for the Biology of Aging at HMS.

Peng Yin is a co-leader of the Wyss Institute’s Molecular Robotics Initiative. His research focuses on DNA and RNA — the molecules otherwise known to encode all cells’ information and pass it from one generation to the next — as a synthetic material to construct, manipulate, and visualize predesigned structures or naturally occurring biomolecules at the nanoscale.

The development and improvement of next-generation sequencing methods has enabled researchers to analyze DNA and RNA in cells and tissues with unprecedented sensitivity, and on a massively parallel scale. This has led to new diagnostics and therapies, as well as a new understanding of many biological processes.

However, the same level of sensitivity and throughput has not yet been achieved for cells’ proteomes, the full complement of proteins resulting from the specific gene-expression programs that determine their identities and functions. As proteins levels and activities are intricately regulated, being able to take a high-resolution snapshot of cells’ proteomes could ultimately allow better predictions of the states cells are in, provide new insights into their inner molecular workings, and reveal more accurate biomarkers and useful therapeutic targets for diseases.

To do that, Yin’s group developed a DNA nanotechnology-based approach, called DNA-PAINT, that is able to visualize single molecules with nanoscale resolution. The system is capable of multiplexed analyses of many molecules, quantifying actual numbers of proteins at a specific location, and visualizing molecular-scale features packed in dense clusters. Yin’s team will harness the sum of these features to develop a method that is able to fingerprint single proteins in cells, complementing next-generation DNA and RNA sequencing to provide a more complete picture of cells’ identities and functions.

“I am honored to have been selected for this prestigious award,” said Yin. “With its support, we will leverage our DNA-PAINT super-resolution imaging technology to engineer a ‘single-molecule fingerprinting’ method that can be applied with high throughput to cells’ proteomes. Our work embodies the spirit of the NIH’s commitment to high-risk, high-reward research and ultimately could advance many research areas.”

Justin Kim is an assistant professor in the Department of Cancer Biology at Dana-Farber Cancer Institute in addition to his position at HMS, where his research group focuses on the development of new chemical technologies for the discovery and modulation of protein-protein interactions.

Kim received his A.B. in chemistry and physics at Harvard University. His Ph.D. work with Mohammad Movassaghi at Massachusetts Institute of Technology (MIT) was directed toward chemical synthesis of bioactive complex natural products, and his postdoctoral research with Carolyn Bertozzi at University of California, Berkeley, and Stanford University focused on the development of biologically compatible chemical reactions.

Po-Ru Loh is an assistant professor of medicine in the Division of Genetics and Center for Data Sciences at Brigham and Women’s Hospital, and an associate member of the Broad Institute.

He earned his B.S. in mathematics from the California Institute of Technology and Ph.D. in applied mathematics from MIT, where he worked with Professor Bonnie Berger on algorithms for analysis of large genomic data sets.

His research group is now applying these methods to investigate mosaic chromosomal alterations in DNA from blood and bulk tissue while continuing to develop innovative methods for other large-scale genetic data analyses.

In addition to the New Innovator Award, his lab is supported by a Burroughs Wellcome Fund Career Award at the Scientific Interface, a Glenn Foundation for Medical Research and AFAR Grant for Junior Faculty, and a Broad Institute Next Generation Fund award.

Richard Lee will use the funding from the Transformative Research Award to establish a new research program in collaboration with Peter Dedon, a renowned biochemistry professor at MIT.

“I’m extremely excited about this project, as it is work I’ve been thinking about for many years,” Lee said. “We proposed to NIH that there may be some unique molecules within DNA that accumulate with age. That idea has been around for decades, but the mass spectrometry and biochemical technology to search for new DNA molecules have been improving rapidly.”

That search will begin in the organ Lee, a cardiologist, called his favorite — the heart — before moving on to search for new DNA molecules in aging brain tissue.

“It’s really exciting to do one of these High-Risk, High-Reward projects,” Lee said. “NIH is sometimes criticized for being conservative, but they are willing to take some big chances. I hope we will be among the investigators who deliver.”

Norbert Perrimon is an investigator of the Howard Hughes Medical Institute, and an associate member of the Broad Institute.

He is a geneticist recognized for his work in signal transduction and the development of functional genomics methods, and is known particularly for the characterization of canonical signaling pathways and the development of methods, such as the FLP-FRT dominant female sterile technique to generate germline mosaics, the GAL4-UAS method to control gene expression both spatially and temporally, and high-throughput RNAi screening.

He received a doctorate from the University of Paris in 1983, and has been on the faculty of HMS since 1986. He received the George W. Beadle Medal from the Genetics Society of America in 2004. He has been elected to the American Academy of Arts and Sciences, American Association for the Advancement of Science, EMBO, and National Academy of Sciences.