Mostafavi to step down as GSD dean 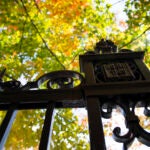 Praised for ‘imagination, energy, and dedication,’ he will depart post at close of academic year

Mohsen Mostafavi, dean of the Harvard Graduate School of Design (GSD) since January 2008, announced today that he will step down from the position at the end of the 2018-19 academic year.

Over more than a decade as dean, Mostafavi has led efforts to strengthen and renew the GSD faculty, to expand and diversify the School’s degree programs and its student body, and to extend its scholarly impact both nationally and internationally. He has also enhanced its resources and physical plant and forged innovative collaborations with other parts of Harvard, as well as design practitioners worldwide. As the Alexander and Victoria Wiley Professor of Design, he plans to return to active service on the GSD faculty after a sabbatical year.

“It has been a great honor and a privilege to be part of the GSD community as dean,” said Mostafavi. “The incredible diversity, talent, and passion of our students, faculty, and staff both inspire and affirm the School’s commitment to educating leaders in design, research, and scholarship to create a resilient, just, and beautiful world. I am proud of what we have accomplished together over the past 11 years, and I look forward to witnessing the School continue its collaborative ethos and engagement with Harvard and the world in the years to come.”

“Although I have had the chance to work directly with Mohsen for only a short time, I know from my years on the Corporation how much his leadership has contributed to strengthening the Design School over more than a decade — and how much he has done to elevate the role of design within Harvard more broadly,” said President Larry Bacow. “Mohsen has led with imagination, energy, and dedication. Those qualities have strengthened the GSD’s position as a worldwide leader in design education and research and as a critical bridge between design theory and practice. He has also been an outstanding University citizen, not only in creatively connecting the Design School with other parts of Harvard but also in helping steer University-wide initiatives to fully embrace the arts and to create common spaces that contribute to our sense of community. All of us owe him our thanks.”

A leading scholar of architecture and urbanism, Mostafavi guided the GSD through a period of growth, innovation, and change. His deanship brought about the strategic expansion of several degree programs, along with a roughly 50 percent increase in the GSD’s student body. Mostafavi has also worked to open doors to students from varied backgrounds, including through rising investment in financial aid.

“I am proud of what we have accomplished together over the past 11 years, and I look forward to witnessing the School continue its collaborative ethos and engagement with Harvard and the world in the years to come.”
— Mohsen Mostafavi

Within its Master in Design Studies (M.Des.) program, the School has introduced new concentrations in fields linked to emerging research areas, such as critical conservation; energy and the environment; risk and resilience; urbanism, landscape, and ecology; and arts, design, and the public domain. In addition, the GSD has broadened its range of design studios for degree students, now in dozens of locations across the U.S. and around the world, while also significantly expanding its portfolio of executive education programs.

Under Mostafavi’s leadership, the GSD faculty has grown from 62 to approximately 90, and new faculty have been recruited to chair the School’s three principal academic departments: architecture, landscape architecture, and urban planning and design. While building strength in these core areas, the School has pursued appointments intended to add strength in urbanism, sustainability, technology, social equity, and other areas of rising interest. Meanwhile, the GSD has taken steps to institute a tenure-track system for faculty appointments, improve mentoring, and energize the interplay of theory and practice within its faculty ranks.

“Mohsen has led the academic growth of the GSD with an ambitious vision for the School and its impact on the world,” said Provost Alan Garber. “He has worked tirelessly to connect the GSD with other parts of the University, bringing design together with engineering, public health, law, public policy, and public administration. He has contributed to the vitality of the arts, enriching our intellectual life, and helped transform the spaces where our community gathers. The entire University has been fortunate to benefit from Mohsen’s creativity and dedication.”

Alongside its ambitious efforts to expand research projects and educational opportunities abroad, the GSD recently launched a cross-disciplinary initiative on the future of American cities, designed to bring together experts and leaders from around the country to help cities tackle urgent challenges. In 2014, the GSD established the Harvard Center for Green Buildings and Cities, intended to inform and elevate sustainability practices in relation to the built environment. Overall, the School’s research portfolio has grown markedly over the past decade, boosted by a major increase in sponsored research funds.

“It was a pleasure to work with Mohsen throughout my years in Mass Hall,” said Faust. “His leadership has strengthened the Design School, broadened its angle of vision, and amplified its impact across Harvard and throughout the world of design. He has also been a guiding light in our Common Spaces and arts initiatives, and a valued voice among the deans. I join many others in gratitude for his distinguished service as well as his friendship.”

“I have had the pleasure of serving as a fellow dean for seven years with Mohsen and as co-chair of the Common Spaces initiative for 10 years,” said Lizabeth Cohen, the Howard Mumford Jones Professor of American History and former dean of the Radcliffe Institute for Advanced Study. “Working so closely with him has led me to admire his deep commitment to the role that architecture can play in improving our quality of life on the Harvard campus and to how the GSD, through partnering with other schools, can infuse design thinking into many intellectual domains. I have been struck over and over with Mohsen’s very original mind and his insightful and constructive contributions to important discussions. Under his deanship, the GSD has provided schooling in the power of design for many in the Harvard community, not just for its own students.”

In his time as dean, Mostafavi led the GSD’s most ambitious fundraising campaign, Grounded Visionaries, the School’s component of The Harvard Campaign, which concluded in June. He oversaw plans for a significant expansion and renewal of the GSD’s physical plant, including renovations within Gund Hall and the acquisition and refurbishment of several nearby buildings. And he set in motion efforts to enhance the sense of community within the GSD, consistent with the goals of the spring 2018 report of the University-wide Task Force on Inclusion and Belonging.

Mostafavi’s own widely published scholarly work focuses on modes and processes of urbanization and on the interface between technology and aesthetics. He came to the Harvard deanship from Cornell University, where he served as the Drukier Dean of the College of Architecture, Art and Planning and as the Wiesenberger Professor in Architecture. He previously served for nine years as chairman of the Architectural Association School of Architecture in London. Earlier in his career, he taught at the Harvard GSD and the University of Pennsylvania School of Design.

Mostafavi is a trustee of Smith College and an honorary trustee of the Norman Foster Foundation. He served on the steering committee and the jury of the Aga Khan Award for Architecture, and he has chaired the jury of the European Union Prize for Contemporary Architecture – Mies van der Rohe Award, as well as the global, European, and North American juries of the LafargeHolcim Foundation Awards for Sustainable Construction. He has twice been named by DesignIntelligence as one of the most admired educators in architecture and design, in recognition of his commitment to advancing education, his strong support for faculty, and the “holistic, deep ecological and aesthetic” sense he brings “to the design conversation.”

Bacow said that he and Garber plan to launch the search for a new dean soon. Meanwhile, he said, advice and nominations regarding the search may be sent in confidence to gsddeansearch@harvard.edu.