From the page to the stage 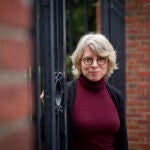 Prior to Harvard visit, Min Kahng talks about how he created musical ‘Four Immigrants’

Min Kahng is the composer and writer of the award-winning “The Four Immigrants: An American Musical Manga,” which he based on the autobiographical comic by Japanese artist Henry Kiyama. Kahng will lead a master class for students on a three-day visit to Harvard as part of the Office for the Arts’ Learning From Performers program.

In addition to leading a workshop, Kahng will deliver a public lecture at Houghton Library on Wednesday at 6 p.m. in connection with its exhibition on “Treading the Borders: Immigration and the American Stage.” In advance of his visit, he talked with the Gazette about his creative process and artistic journey.

GAZETTE: “The Four Immigrants” was originally a Japanese manga. How did you come to bring it to the stage?

KAHNG: I stumbled upon it in a used bookstore in downtown Berkeley (California). Henry Kiyama was a 20th-century Japanese artist who came to the U.S. to study art. He was college-age in San Francisco when immigration laws were stiffened. It primarily interested me because the narrative we are told about Asian immigrant history is they came here to become laborers. To learn there was a Japanese immigrant who came to study art at the San Francisco Art Institute really spoke to me because I feel like I’m trying to carve a similar path. I got in touch with the English translator Frederik Schodt, who I discovered lives 20 minutes away. Fred is a very generous and giving person. He gave me his vote of confidence, and through him I got the blessing of Kiyama’s daughter and granddaughter, who are in Japan.

“My parents knew I had a creative side, but they didn’t know how to cultivate it.”

GAZETTE: So was your path to the arts non-linear?

KAHNG: I was not involved in theater growing up. I listened to cast albums of Broadway shows, and the Disney renaissance happened when I was in elementary/middle school. But I grew up in a household where the arts weren’t necessarily encouraged. My parents knew I had a creative side, but they didn’t know how to cultivate it. They didn’t know there were theater programs and classes. I think that was fairly common in immigrant families. It may be changing now, but in the ’80s the focuses for immigrant parents were on the classic doctor/lawyer goals. It was definitely a struggle when I decided to major in music — how would I sustain myself, what kind of career would I have? — so I double-majored in rhetoric. It was a way to say to my parents I might become a lawyer.

GAZETTE: You mentioned Disney as an influence. Which movie was most powerful?

KAHNG: The film that really grabbed my attention was “Beauty and the Beast.” I think the opening number showed me how a single song could set up an entire movie. In that first song, you learn all you need to learn about Belle, and you hear it from a range of townspeople. The way their voices are interwoven, and then Gaston too — by the end of the song, you’re ready to see what happens next.

GAZETTE: Back to your education: When you graduated college with your music degree, you went into marketing. Were you trying to take the more expected path?

KAHNG: After college, I felt fairly confused as far as what I felt I needed to do. I had not ever seriously considered a career in the arts. Also, the low presence of Asian Americans in media reinforced that; it didn’t seem there were a lot of us working in theater or film or television. When I finally decided to go for it, I used voice lessons as my stable job and took on a whole bunch of other gigs. I was performing community theater, music directing, playing in orchestra pits, and eventually teaching theater classes. Along the way, I was also writing. I had a passion project called “The Song of the Nightingale” (based on the Hans Christian Andersen fairytale).

GAZETTE: On your blog, you talk about a trip to New York to network theater connections and how you dreaded having to “schmooze.” Was it as bad as you expected?

KAHNG: That trip gave me hope that even if I become more integrated in the New York theater community at every level and in every pocket, there are donors, producers, actors, and musicians who just love making theater. Some might be all about the business and tough to deal with, but the majority of my interactions were pleasant. I’m learning to stop using the word “schmoozing” and instead think about it as connecting with people who are like-minded. I think they are out there.

GAZETTE: What are your next projects?

KAHNG: My next production is called “Gold: The Midas Musical,” which opens in February at Bay Area Children’s Theatre. It’s an imaginative romp through the Midas story as if imagined by a 10-year-old living today, combining anachronisms like a telescope and wristwatch with contemporary musical theater song styles. I hope to truly focus in on the relationship between King Midas and his daughter, and how they both discover that family is worth more than all the gold in the world. I’ve also been developing a play called “Calafia: A Reimagining.” It’s a portion of an epic story written in the 16th century about a black Amazonian warrior queen who rules over an island of black Amazonian women. It’s believed to be how we got our state name. I’m reimagining her because in the original story she ends up converting to Christianity and getting married — the opposite of everything I found fascinating about this character. My take is focused on the island itself, and addresses themes of how we deal with outsiders in our community.

GAZETTE: Is it harder to think of yourself as an artist or a businessperson?

KAHNG: I’ll have to say it’s harder to declare myself an artist. I’ve always had a very practical side of my brain, so while some other artists might struggle with the business side of things, I’m pretty adept at it. Having had a corporate job helped me to understand professional dynamics. But because of my path, not thinking art was a career option, it took me a while to have the confidence to say that’s what I am. I’m definitely there now.