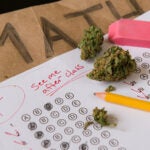 On his first day at the MGH Charlestown HealthCare Center, in 1968, Dr. Roger Sweet got a phone call.

“Where are you?” the voice on the other end demanded.

“I’m the nurse at the high school. You’re supposed to be doing physicals.”

Sweet headed to the high school, where he found 40 kids waiting. He had an hour, the nurse told him.

“I was trained to do one physical in an hour,” said Sweet, a founding physician at the center, former assistant professor at Harvard Medical School, and head of MGH Health Care Centers until his retirement in 1993.

The story provides a picture of the unmet needs in the neighborhood when MGH Charlestown opened, part of the first wave of community health centers that spread across the nation in the late 1960s.

“The community health center movement was not just about health, it was about poverty,” said Jean Bernhardt, the center’s current administrative director. “I think health centers have done a great job. They brought health care to a vulnerable community that didn’t have it. … We’ve been part of that.”

The movement got its local start in Dorchester in 1965, when what is now the Geiger-Gibson Community Health Center opened its doors. Today there are 1,400 community health organizations nationwide, serving more than 28 million patients at 11,000 sites. Thirteen million of those patients are poor.

The movement came as President Lyndon Johnson waged his War on Poverty, which included support for the poor and elderly through passage of Medicaid and Medicare in 1965.

Today there are 1,400 community health organizations nationwide, serving more than 28 million patients at 11,000 sites. Thirteen million of those patients are poor.

MGH’s first community health center initially focused on youth and school health, but soon opened its doors to all of Charlestown, according to James Morrill, the center’s medical director. Neighborhood partners, including the nonprofits ABCD and the John F. Kennedy Family Service Center, have been key allies along the way, Bernhardt said.

As Charlestown HealthCare marked its 50th anniversary with an open house this fall, officials noted the decades-long persistence of problems such as hunger and homelessness. But back in 1968, just a third of local children received basic immunizations, compared with near-universal coverage today. Another, less-welcome shift has been in the rise of chronic lifestyle-related illnesses such as diabetes and high blood pressure, reflecting nationwide patterns. And while substance-use disorder isn’t new, the dimensions of today’s opioid crisis dwarf those of the past, Bernhardt and Morrill said.

The community has changed as well, said Morrill, an assistant professor of medicine at Harvard Medical School. Gentrification has attracted wealthier residents, widening income inequality and altering the makeup of the center’s 10,000 patients.

“It makes it complex, but the mission remains,” Morrill said. “The poverty is still there.”

Joan Quinlan, MGH’s vice president for community health, said that neighborhood centers have always provided important lessons on care. One example: If you want to know a community’s health priorities, ask the community.

Speaking at the open house, Quinlan recalled a community meeting at Charlestown HealthCare more than two decades ago, not long after she started at MGH. The session kicked off with a data-driven presentation explaining that heart disease was the community’s most pressing health challenge.

“The community listened politely, the doctor sat down, and then they went on to discuss how drugs and alcohol were tearing at the fabric of life in the community,” said Quinlan. “You’ve taught us that delivering high-quality clinical care is critical, but that we have to listen to the community and address the community’s concerns about all the things that affect health.”

“We have to listen to the community and address the community’s concerns about all the things that affect health.”
— Joan Quinlan, MGH’s vice president for community health, pictured below

Similarly, Quinlan said, a model of substance-abuse treatment developed at Charlestown HealthCare by Mark Eisenberg, an assistant professor of medicine, has been scaled up and adopted by MGH.

The opioid crisis remains the top challenge facing Charlestown today, according to Morrill and Bernhardt. In addition to the medication-assisted treatment initiative Eisenberg developed, the center has established a program in which an addiction nurse helps determine when patients are ready to begin treatment and develops harm-reduction strategies in case of relapse. Complementing the efforts of the nurse and physician is a recovery coach who provides the patient with peer support.

“This is an epidemic that is devastating generations in this community,” Bernhardt said.

The center has also reached out to local public schools to provide on-site mental health services, providing a clear example of how to lower barriers to important care, Quinlan said.

Moving forward, Bernhardt expects to see more emphasis on wellness and prevention, whether for substance-use disorders or other chronic illnesses. The center is focused on targeting early signs of addiction. It also hopes to prevent lifestyle-related conditions via programming addressing the importance of a healthy diet, she said.

One thing that seems certain is that physicians and nurses will greet today’s patients tomorrow, along with their children and maybe even their grandchildren. Ivan Lopez, a patient at the center since childhood, brought his boys, 3-year-old Ezra and 1-year-old Ismael, to the 50th anniversary open house. Friendly, conscientious physicians and good care have kept him coming back, Lopez said.

“I think that’s been one of the parts I’ve found most rewarding — multigenerational care,” Morrill said.

Mary Delaney, a nurse manager at the center for more than 20 years, said that staff camaraderie helps make every day fulfilling.