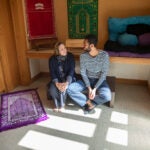 When she arrived at Harvard as a member of the Class of 2000, Lauren Williams knew she liked math, but she wasn’t certain about making a career of it.

These days, her mind is made up. Williams, who grew up in Los Angeles, is the second woman to be tenured in Harvard’s Math Department and the Seaver Professor at the Radcliffe Institute. She comes to campus from the University of California, Berkeley.

Williams focuses on algebraic combinatorics. She will teach one course this semester, a first-year seminar titled “The Story of the Alternating Sign Matrix Conjecture.”

GAZETTE: How does it feel to be back here as a member of the faculty?

WILLIAMS: It’s exciting to be back again. I had a wonderful time here as an undergraduate. In fact, I remember that midway through my sophomore year, I thought to myself, “Oh no, nearly half of my time at Harvard is over.” I had no idea I’d ever come back as a faculty member. Right now I’m excited to engage with the students here, and am happy to bring combinatorics to Harvard since the Math Department hasn’t ever had a senior faculty member whose main focus was combinatorics.

GAZETTE: Can you describe combinatorics for someone who isn’t a mathematician?

WILLIAMS: The lazy way to describe combinatorics is to say that it’s about counting. This doesn’t at all encompass the field, which has rich connections to various other fields of mathematics as well as physics, but basically combinatorics provides tools for organizing and enumerating structures that are discrete or even finite, as opposed to continuous.

GAZETTE: Mathematicians often describe formulae as elegant or beautiful — is that aesthetic quality part of what attracted you to the field?

WILLIAMS: Yes, very much so. I’ve always loved patterns and symmetry. I feel like [pure] mathematics sits halfway between science and art, and can be a bit like poetry in that there is a fairly rigid framework, but within that framework, you’re trying to create something beautiful. In mathematics, you’re trying to come up with the simplest and most elegant expression or explanation for why things are the way they are.

Another thing I like about math is that there is only one correct answer. I took a philosophy class here as an undergrad, and remember feeling very frustrated. I think it was objectively a great class, but I couldn’t stand the fact that every week we started out with a different set of axioms and came to a different conclusion for the same problem.

“I do not see myself as a trailblazer. There are many amazing women mathematicians out there … But the percentages are still small.”

GAZETTE: Harvard has a complicated record when it comes to supporting women in mathematics and science. Does that weigh on you at all as just the second woman to receive tenure in the Mathematics Department?

WILLIAMS: The other faculty and staff in the Math Department have been incredibly welcoming toward me. I already knew a lot of them from my time as an undergraduate and subsequently as a Benjamin Peirce lecturer [2006‒2009], so it doesn’t weigh on me too heavily. Of course it can be sometimes tricky to be a female in a male-dominated field, but this is something I’ve dealt with for a long time. Part of why I’m here at all is because I’ve had an amazing support system in terms of teachers, mentors, and family.

I am the eldest of four girls, all of whom liked math and were good at it. In high school I participated in various math competitions, and often there weren’t many girls around, but at least I had my sisters. My senior year of high school I was the math club president, and was coaching everyone for some upcoming contest. I remember explaining something at the board, and looking out into a sea of faces, nearly all of which were male and listening respectfully — except for my sisters, who were sitting at the back making paper airplanes to throw at me.

I did have a rather difficult experience one summer in high school, when I was one of 24 students, and the only girl, selected for the monthlong math Olympiad. Since the program was held in the middle of nowhere, the only woman I saw during that time was the cafeteria lady. The program was already a stressful environment with a competitive atmosphere, and it was surreal and awkward to be the only girl for such an extended period of time. I felt I was being watched all the time. Fortunately, I survived that experience, and having done so, I have some confidence in my ability to navigate unusual situations. Nowadays I have many collaborations with women, which has been refreshing. My daughter actually thinks that most mathematicians are women.

GAZETTE: Do you want to be seen as a trailblazer for other women in the field?

WILLIAMS: I do not see myself as a trailblazer. There are many amazing women mathematicians out there — including down the road at MIT and at other universities in the Boston area — and there have been many who came before us. But the percentages are still small, so it would be nice to see the field of mathematics become more diverse. If you ask a random person to visualize a math professor, they are very likely to imagine a white man. Most people, including myself, have this kind of implicit bias, which can have far-reaching repercussions.

When I was an undergraduate here, it felt inconceivable to me that there would ever be a female math professor or combinatorialist at Harvard. I still had a great experience, but the absence of women was impossible not to notice. So I’ll be happy if my existence here is encouraging to other women.