Champion of equity and social justice 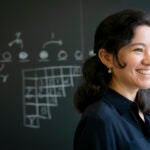 In nearly 30 years leading diversity initiatives at Harvard Medical School (HMS), Joan Reede has helped scores of mentees advance their academic careers, inspired thousands of young people to consider a future in medicine and science, and encouraged HMS to embed diversity and inclusion into its mission.

As dean for diversity and community partnership, Reede is considered by many at HMS to be the heart and soul of diversity efforts at the School, by virtue of her keen intelligence, warm personality, ability to coalesce resources, and passion for equity and social justice — and for her penchant, as a trained pediatrician, for helping people realize their full potential.

“Harvard Medical School is so lucky to have her,” said Nawal Nour, associate professor of obstetrics, gynecology, and reproductive biology at Brigham and Women’s Hospital (BWH), who has known Reede for 20 years as a mentee and colleague. “I have had the opportunity to work with Joan many times over the course of my tenure at BWH and HMS, and what makes her so unique is her ability to motivate and inspire those around her to share and continue the great work that she does. She is absolutely amazing.”

Reede deflects credit for her accomplishments, preferring to focus on the team effort. “This is a story about we. I have done nothing by myself,” she said.

That concept is echoed in the “Better Together” slogan of the School’s 38-member Task Force on Diversity and Inclusion, appointed by HMS Dean George Q. Daley and led by Reede, who is also HMS professor of medicine at Massachusetts General Hospital.

But there’s no denying that Reede, working with colleagues in the Office for Diversity Inclusion and Community Partnership and beyond, has built a wide-ranging body of programs designed primarily to promote the recruitment, retention, and advancement of diverse faculty — especially those from groups underrepresented in medicine, such as women, LGBT, and people living with disabilities.

From fellowships in minority health policy to visiting clerkships for medical students of color to career exploration for Boston-area middle schoolers, these 20-plus programs have touched tens of thousands of individuals, directly or indirectly. Reede’s office oversees all diversity-related activities involving HMS faculty, trainees, students, and staff.

“She’s like a national treasure,” said longtime mentee Kathryn Hall, HMS assistant professor of medicine at Brigham and Women’s. “There are not many people who have been as effective for so long. It’s a testament to her will and determination and vision.”

Equity, justice and ‘The Ladies’

Driven by issues of equity and justice, and not by diversity for diversity’s sake, Reede believes every person has something worthwhile to contribute to HMS. She traces her values to “The Ladies,” three strong black women who guided her while growing up on the South Shore of Boston: her grandmother, her mother, and “Aunt” Amanda.

Reede noted that her grandmother cleaned houses in the segregated South, had an elementary school education, and was raised by her great-grandmother, who was born into slavery. Reede’s mother earned her college degree when Reede graduated medical school, and was “probably the smartest person I’ve ever known,” she said. And the woman Reede called Aunt Amanda graduated from Radcliffe College, likely in the 1920s, and taught her about the power of people uniting for social change. “The Ladies” encouraged Reede to dream big but also kept her grounded.

“These three women, who were very different in terms of their educational background, treated each other with equal respect,” she recalled. “I’m very much engaged in community, very much believe in treating everyone the same, very much believe that your life should have purpose. And that came from those three amazing women.”

Diversity and inclusion are core to academic medicine and lead to better decisions, science, and patient outcomes, according to Reede. “When you have complex issues, linear and siloed thinking will not give you as good a result as having multiple voices, perspectives, and backgrounds at the table,” she said. “That’s part of what diversity brings. We do better when there’s a we.”

HMS’ dean agreed. “Joan has recognized for many decades that for Harvard Medical School to be a leader in research, education, and service, we must reflect the diversity of our patients, our community, and our nation,” said Daley, who is also the Caroline Shields Walker Professor of Medicine.

“She founded the HMS Minority Faculty Development Program back in 1990 and has worked tirelessly since then to create programs that promote the recruitment, retention, and advancement of underrepresented faculty at HMS. Her determination, spirit, and vision make her an inspiration to all of us. She has served as a true guiding light in our quest to create the diversity and inclusion at HMS that will, in the long run, advance our research endeavors and improve the health care we are able to provide to all people,” he said.

Reede grew up in Hull, Mass., near the U.S. Army’s Nike Missile Site (Fort Duvall), where her father was stationed. At about seventh grade, inspired by popular TV physicians such as Marcus Welby (“Marcus Welby, M.D.”), Reede decided to become a doctor.

“I never recognized that they were white, that they were men. I just knew they were in charge, and that I should be in charge — not of other people, but of my life. It never occurred to me that I couldn’t or shouldn’t or wouldn’t be whatever I wanted to be,” she said.

Reede earned her bachelor’s degree from Brown University, medical degree from Mount Sinai School of Medicine in 1980, and then completed a pediatric residency at Johns Hopkins Hospital. Returning to Boston, Reede worked in public schools and juvenile prison clinics and was struck by the children’s pressing needs and lack of services in the community. In 1986 she pursued a child psychiatry fellowship at Boston Children’s Hospital — not to become a therapist, but to serve her young patients better. She then became medical director of Mattapan Community Health Center.

In the late 1980s, while raising her daughter as a single, divorced parent, Reede was an HMS clinical instructor in psychiatry at Boston Children’s while earning her master’s in public health at the Harvard T.H. Chan School of Public Health. During that period, she conceived of the Minority Faculty Development Program to enhance diversity at HMS and support junior faculty members’ career development. She was hired in 1990 to run the program, which in 2016 celebrated 25 years of success.

Reede recalls how, in the early 1990s, she worked in tucked-away spaces, had no staff, and decorated with office furniture left in hallways. One weekend, she says, a group of empathetic HMS custodians came in and painted her dingy office as a surprise. As a black woman in a mostly white institution, “I knew who worked in the kitchen. I knew the custodians. I talked to the parking attendants. Those were the people who were like my family,” she said.

Reede pressed on, expanding opportunities for women and underrepresented minorities and undaunted by those who viewed her work as peripheral to the HMS mission. Over time, diversity and inclusion gained traction on college and university campuses nationwide, including Harvard. Reede became the School’s first dean for diversity and community partnership in 2002 — one of the few African-American women to hold a medical school deanship in the U.S. — and was promoted to full professor in 2016.

Since 1990, the share of full-time minority HMS faculty, including black, Hispanic, Native American, Asian, and Pacific Islanders, has risen from 10 percent to nearly 25 percent, including more than 700 underrepresented minority faculty. The School has added the concept of diversity to its mission statement, crafted a community values statement, and, in October 2017, announced the HMS Diversity Statement, which affirms that, “Our unique perspectives, talents, experiences and contributions as HMS students, trainees, faculty, staff, and administrators are the foundation and drivers of our excellence.”

A coveted colleague locally and nationally, Reede has served on numerous commissions, committees and boards, among them the University-wide Harvard Presidential Task Force on Inclusion and Belonging. Her achievements have garnered accolades from such organizations as the National Academy of Medicine, Boston NAACP, Association of American Medical Colleges, and American Cancer Society Cancer Action Network. Reede also holds a master’s in health policy and management from the Harvard Chan School and a master’s of business administration from Boston University.

The mentor as ‘mom’

Whether coaching an individual or leading one of the myriad programs in her orbit, Reede has helped countless mentees navigate the Harvard medical system and discover opportunities they’d never before considered.

“She’s always offering me a chance to grow and puts me in the spotlight to be seen as a future leader,” such as presenting at academic conferences, said Alden Landry, HMS assistant professor of emergency medicine at Beth Israel Deaconess Medical Center and faculty assistant director in the Office for Diversity Inclusion and Community Partnership.

Landry has benefited from several programs that Reede created to widen the pipeline of minorities going into biomedical sciences and medicine. Among them was a Visiting Clerkship Program that enables medical students from across the U.S. who are underrepresented in medicine to do one-month rotations at HMS, thereby diversifying the pool of candidates who might apply to Harvard for residencies. Landry, then attending the University of Alabama School of Medicine, took part in 2005.

“I wasn’t expecting it, but I felt amazingly comfortable at Harvard and was lucky enough to be matched here [at Beth Israel Deaconess] for my residency,” he said. He went on to complete a Harvard-based Commonwealth Fund Fellowship in Minority Health Policy.

Despite Reede’s impressive credentials and packed schedule, Landry said, “She makes herself available for her mentees. The fellows refer to her as ‘mom.’ We all look up to her, but she’s very warm and caring. She’s family-oriented and always talks about her grandkids and brother. It’s refreshing.”

Hall, a molecular biologist at Brigham and Women’s, is grateful for Reede’s initiatives like the Biomedical Science Careers Program, which has supported some 14,000 high school and college students, postdocs, and junior faculty. Hall participated when she was an HMS graduate student and has become a mentor for the program herself. She notes Reede’s skill at running its large networking events.

“Her conferences run like a ship in the U.S. Navy,” Hall said. “Everything goes on time, every panel is amazing. She sets a very high standard. Joan has also pioneered the giving of recognition awards. It’s so important to acknowledge each other as often as we can.”

Hall took a break from academia and spent a decade in the biotech and film industries, and she remembers how Reede warmly welcomed her back to HMS in 2010. “It was really clear to me, when I reconnected with Joan, that I had come back to community. It meant so much to have a big hug from Joan that day. It helped me get grounded and back on track,” she said.

Reede takes enormous pride in her professional successes, but she says her greatest accomplishment, by far, is her daughter, Loretta Jackson, and two grandchildren, Layla and Carter. “The work I do here is important to me, and I care about it deeply, but family’s always priority,” Reede said.

Reede doesn’t consider herself a trailblazer but rather part of an ongoing journey toward justice. “The work I do moving toward civil rights, equity, and social justice is a continuum of work,” she explained. “It’s building on others who led the way. And the individuals who are coming out of our programs will continue to carry it forward. You have to be vigilant. You cannot afford to think that we have arrived.”

Reede’s strong faith in the intrinsic goodness of people sustains her during these polarized political times. “My faith is not about a specific church or religion,” she said. “It’s just an absolute faith that we have a purpose, that in the end what is supposed to happen will happen, and that we will always move toward good. I just believe it.”