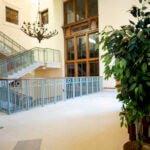 He’s been a Hollywood favorite for decades.

Inventor Thomas Edison helped bring him to life on film in 1910. Horror icon Boris Karloff gave the monster a jumble of reanimated body parts ready to wreak havoc, an indelible look and feel in 1931. Mel Brooks’ comic genius turned him into a debonair dandy in tails and top hat in 1974. Yet the range of screen interpretations only hints at how Mary Shelley envisioned her creation in her 1818 novel: as a creature struggling to comprehend his own existence who is desperate for companionship and acceptance.

Frankenstein’s monster is 200, and in the coming days a series of Harvard events will shed some light on the lasting appeal of one of the greatest inventions in popular culture.

In honor of the novel’s bicentennial, Harvard is sponsoring Frankenweek at Harvard, to include a public reading, a demonstration of some of the science experiments that sparked Shelley’s imagination, a Houghton Library display exploring the stage life of “Frankenstein,” and a symposium focused on film adaptations.

One of the organizers of the celebration is Professor Deidre Lynch, a longtime “Frankenstein” fan who teaches “Modern Monsters in Literature and Film,” a course that works its way through 19th-century horror. Her students, Lynch said, are “really into it.” They have also been shocked to learn of the genre’s deep roots.

“I think that they are just so surprised to find out that this tradition exists — in some ways that horror isn’t just a thing of the slasher films,” said Lynch, Ernest Bernbaum Professor of Literature. “They are interested in how much the literature depicts monsters as things that are created by humans. Monsters are made rather than monsters being born.”

For Lynch, who on Friday will take part in the panel discussion “The Afterlives of Frankenstein: Extinction, Emergence, and the Haunted Screen,” the book was the perfect match for the screen.

“Shelley’s novel in some ways is almost a recipe for film,” she said. “You have dead matter animated by the power of electricity, and filmmakers seem to recognize that it is almost allegorizing their own way of working.”

“Shelley’s novel in some ways is almost a recipe for film. You have dead matter animated by the power of electricity, and filmmakers seem to recognize that it is almost allegorizing their own way of working.”
— Deidre Lynch

Shelley’s story can be traced to a geological disaster. In 1815, the massive eruption of Mount Tambora in the Dutch East Indies spewed ash and gas into the stratosphere, triggering low temperatures and fog and rain in much of the world for the next three years.

Shelley and her husband, the English Romantic poet Percy Bysshe Shelley, vacationed in Switzerland in the dark summer of 1816. While there, the couple befriended the poet Lord Byron and his traveling companion, a young physician named William Polidori. Often stuck inside due to the weather, the group turned to a volume of German ghost stories for entertainment. Soon, Byron suggested they write their own scary tales. Inspired by conversations between her husband and Byron about the “nature and principle of life,” and a waking dream in which she saw “the pale student of unhallowed arts kneeling beside the thing he had put together,” Shelley began work on her masterpiece. (Polidori would later pen “The Vampyre,” considered the first modern vampire story.)

The professor thinks the 19th century’s extreme class divisions may have influenced how the work was received.

“There certainly are ways in which in the 19th-century ‘Frankenstein’ is often read as a story about the revenge of the poor,” said Lynch. “We think of it as a story about science out of control and technology out of control, but I think for a 19th-century audience, they are very conscious that the bodies that are used by doctors in training, the bodies that are used by anatomists, are the bodies of the poor. And so this vengeful creature who’s composed of multiple body parts from multiple corpses seems in the 19th century like a figure for the unruly ungovernable energies of the mob, who have every reason to be angry with the governing class.”

Shelley’s story endures, like other horror classics, because it continues to help people cope with their fears and everyday anxieties, Lynch said.

“At the present moment in society there’s a kind of violence that is just so pervasive that we don’t know how to deal with it, whereas films, horror novels, give us some sort of narrative closure. And that might be consoling in some way.”