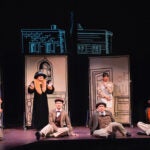 From the page to the stage

Athlete and social activist Colin Kaepernick set the tone before an exhilarated crowd that included some 150 local high school students, declaring that people in positions of privilege and power have a “responsibility” to speak up for the powerless.

“People live with this every single day and we expect them to thrive in situations where they’re just trying to survive,” said the NFL free agent who famously took a knee during pregame national anthems to protest racial injustice in America. “If we don’t, we become complicit. It is our duty to fight for them.” 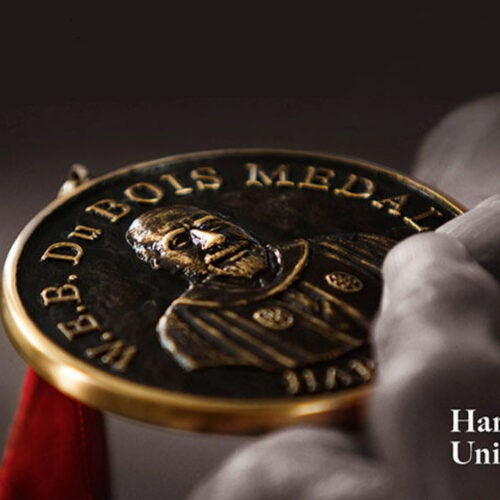 Noted for contributions to African and African-American history and culture

Ladd, the former director of the Bunting Institute at Radcliffe, donned her medal, then pumped her fist in the air and told the cheering crowd: “A takeaway must be protest, protest, protest.”

Stevenson, M.P.P. ’85, J.D. ’85, L.L.D. ’15, who founded the Equal Justice Initiative, dedicated his award to “people who did so much more with so much less” and asked the audience to think of hope as “your superpower.” To the students, he made a more pointed request: “You’ve got to be willing to do uncomfortable things. You’ve got to be willing to do inconvenient things. Don’t ever think that your grades are a measure of your capacity.” Stevenson himself won a historic Supreme Court ruling that declared that mandatory sentences of life without parole for children 17 or younger are unconstitutional.

Moments of humor punctuated the call to resistance, particularly when presenter and incoming Dean of Social Science Lawrence D. Bobo recited parts of Chappelle’s famous skit “The Racial Draft.“ He called the comedian a “teller of uncomfortable truths.”

Chappelle, for his part, praised his parents, especially his mother, a professor of African-American studies. “She raised me well. I am not an uninformed person,” he said.

Chappelle said he was humbled to be on stage with his fellow honorees: “You all make me want to be better,” he said. He promised another comedy special and ended his speech with a quote from favorite writer James Baldwin’s book “The Fire Next Time.”

“God gave Noah the rainbow sign. No more water. The fire next time.”

Hutchins Center director Henry Louis Gates Jr., the Alphonse Fletcher Jr. University Professor, reflected on the critical nature of the honorees’ work in the fight for racial and social justice.

“When we recall the dramatic progress we’ve made in this country’s struggle for civil rights, it’s tempting to remember only our long arc of progress. But we find ourselves in a new nadir in our country’s race relations,” he said, quoting Du Bois, the first African-American to earn a Ph.D. at Harvard.

“Agitation is a necessary evil to tell of the ills of the suffering. Without it, many a nation has been lulled to false security and preened itself with virtues it did not possess.”