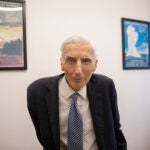 Crunch time for the human race

The Wall Street Journal investigative reporter whose new book chronicles the spectacular collapse of the blood-testing company Theranos and its alleged fraudulent activity told a Harvard audience that the fall is a cautionary tale for other high-tech firms aspiring to disrupt the health care industry.

During a panel discussion at Harvard Law School on Monday, John Carreyrou said successful Silicon Valley executives these days often voice their desire to take aim at a health care system they view as dysfunctional and in need of bold new ideas. But Carreyrou cautioned that the “fake it till you make it” approach that has served many high-tech entrepreneurs — hyping unproven products and then debugging them as they go along — may be ill-suited for medicine.

“It probably will be a breath of fresh air for Silicon Valley” to enter the health care realm, he said, “but hopefully everyone now will be cognizant of this Theranos precedent and of what can happen if you ‘fake it till you make it’ with a medical product that doctors and patients rely on for life-or-death decisions.”

Carreyrou’s best-seller, “Bad Blood: Secrets and Lies in a Silicon Valley Startup,” details the rise and fall of Theranos and its charismatic founder and former CEO, Elizabeth Holmes, and how he uncovered the story.

Founded in 2003, Theranos became a quick Silicon Valley sensation, boasting a $9 billion valuation and a host of prominent backers impressed with its promise of a new blood-testing technology.

But some media stories cast doubt on its claims, and in March Theranos and Holmes agreed to settle massive civil fraud charges. In June, Holmes and Theranos’ former president, Ramesh Balwani, were indicted on wire fraud charges, which prosecutors said stemmed from a multimillion dollar scheme to defraud investors, and a separate alleged scheme to defraud doctors and patients.

Reflecting on the story, Khurana said he found it “heartbreaking to have a young, talented individual … who lives in a kind of culture in which getting an education is not an end in itself but merely a means increasingly to developing your app,” without considering social responsibilities or engaging in the “deep introspection” that a liberal arts education offers.

“It used to be as a society and a country that getting elected president or winning the Nobel Prize was one of the greatest achievements that you could do,” he said. “But now it’s going to Silicon Valley and starting a startup and being valued, and … being a billionaire before you turn 30.”

Asked by Wang what role gender played in the Theranos story, Carreyrou said it was central.

“All my reporting shows that Elizabeth Holmes capitalized on the fact that she was a woman to win over the backing of these older men,” he said, citing as examples former Secretary of State George Shultz, venture capitalist Donald Lucas, and Stanford University engineering Professor Channing Robertson, all of whom became Theranos board members.

“All these guys were flattered and also impressed with her,” Carreyrou said.

Carreyrou added that when Holmes emerged, there was “a great yearning for a woman to break through in Silicon Valley. Silicon Valley is such a man’s world.”

Cohen, citing the bullying behavior of Theranos lawyers depicted in the book, asked Carreyrou whether “this is a story about exceptional personalities or … about the way people use the law in corporate America, in Silicon Valley, in startup culture, to intimidate.” Carreyrou said it was both, calling it “a story about colorful people … who do outrageous things,” but who are “enabled by this legal foundation. … I didn’t come away from my year experience with a great impression of the legal profession.”

Carreyrou recounted how his reporting began with a tip from a Missouri pathologist blogger and culminated in his locating the primary source, a former Theranos lab director. When the source agreed to talk, Carreyrou remembered thinking, “This is going to be a big story.”

This event was hosted by Cambridge Science, Harvard College’s Cabot House, and the Petrie-Flom Center.​