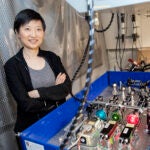 China and India are the focus of fourth cycle of funding

Five of the new projects explore issues particularly relevant to China or India, and two incorporate both countries in comparative studies. Funding is supported by the Dalian Wanda Group and chairman Wang Jianlin, as well as the President’s Global Initiatives Support Fund, established by alumni and friends on the Global Advisory Council. Both small- and large-scale grants are awarded annually, at a maximum of $100,000 and $1 million per year, respectively.

Since 2015, HGI has funded 15 research initiatives that investigate problems of global impact. HGI was established by former President Drew Faust as a way to address major global challenges by supporting innovative and interdisciplinary research and collaboration. With ongoing support from President Larry Bacow, this year’s projects will bring together Harvard faculty and students in partnership with scholars outside the U.S. to exchange ideas and search for solutions to worldwide issues such as climate change, migration, health, and cybersecurity.

This year’s grant recipients are:

Rema Hanna, Jeffrey Cheah Professor of South-East Asia Studies at the Harvard Kennedy School (HKS), will investigate the potential of leveraging technology and private-public partnerships to improve access to state goods and services in India. In partnership with Haqdarshak, an Indian social enterprise, the project seeks to improve on current interventions that inform citizens of programs for which they are eligible and help them apply to them. The work will contribute to knowledge on state capacity and access to social services, and help policymakers and social enterprises better design and significantly increase the scale of their programs.

Robert Stavins, A.J. Meyer Professor of Energy and Economic Development at HKS, will identify and compare innovative approaches to reducing greenhouse-gas emissions in states, provinces, and cities in China, India, and North America. The project will compare how subnational jurisdictions shape and implement policies in China and India versus the U.S. and Canada, where states and provinces have wide latitude in environmental policymaking. The study’s results will be shared widely to stimulate ideas about how climate-change policy might be advanced more effectively, especially in larger countries.

With his project Social Technology for Eldercare in China: A Transdisciplinary Collaborative Research-Education Program, Arthur Kleinman, Harvard College’s Esther and Sidney Rabb Professor of Anthropology, will lead engineering and social science student researchers in developing a program to improve care for the elderly in China. Students will identify socially and culturally appropriate — and easy to maintain — technological solutions to respond to caregivers’ most pressing needs. The project’s long-term goal is to apply culturally adapted versions of the produced technologies internationally.

Professors Meg Rithmire of Harvard Business School, Timothy Colton of the Center for International Development, and Tarek Masoud and Odd Arne Westad, both of HKS, believe that the international power system is in transition from a unipolar to a multipolar model in which geographical regions and regional interaction are taking on greater importance. They will study global neighborhoods to better understand the shape and logic of their roles, how solutions to global issues vary by region, and what roles regions and regional actors may play in structuring our shared future. Rithmire is F. Warren McFarlan Associate Professor of Business of Administration, Colton is Morris and Anna Feldberg Professor of Government and Russian Studies, Masoud is Sultan of Oman Professor of International Relations, and Westad is S.T. Lee Professor of U.S.-Asia Relations.

Anthony Saich, HKS’ Daewoo Professor of International Affairs, will study how China can work collaboratively among the five other countries through which the Mekong River flows — Laos, Myanmar, Thailand, Cambodia, and Vietnam — to manage the basin’s natural resources efficiently and sustainably. Although there are organizations designed to address the issues within the region, the mechanisms to foster the necessary cooperation among the various countries have yet to be developed. This project’s research focuses on the public policy dimensions of the gains and losses of collaborating, the concessions and other adjustments required, and the processes and procedures that will ensure intercountry cooperation.

Dyann Wirth, Richard Pearson Strong Professor of Infectious Diseases at the Harvard T.H. Chan School of Public Health, proposes to implement genetic surveillance of malaria parasites in China to help the country’s efforts at eliminating the disease. Her project aims to establish parasite origins, develop models of introduction and movement, and create an inventory of the genetic sequences of the parasite in China to update current global databases. Data collected from this study may serve as the first evidence to support using genetic analysis to inform country-level policy on malaria eradication and elimination, thus providing a roadmap for researchers and decision-makers (at both the national and regional levels) to coordinate resources toward the shared goal of global malaria elimination. Chan School faculty collaborators of the project include Caroline Buckee, associate professor of epidemiology; Daniel Neafsey, assistant professor of immunology and infectious disease; Chi-Man “Winnie” Yip, professor of the practice of international health policy and economics; and Daniel Hartl, Higgins Professor of Biology and professor in the Department of Immunology and Infectious Diseases.

Finally, Ash Carter of the Belfer Center for Science and International Affairs at HKS will explore how China and the U.S. can jointly promote greater international stability in cyberspace, which has emerged as a major issue between them in recent years. Efforts by both governments to mitigate cyber irritants have had some success, however, they have not adequately addressed the threat to both nations. Through a combination of research papers and dialogue, the project will identify the options and resources available to each government that could lead to or reduce conflict in cyberspace.

HGI will accept expressions of interest for its next grant cycle in December. Funding will be available for projects focused on China and India, as well projects with a China-India comparative component. More information on grants and the upcoming grant cycle can be found on the HGI website.