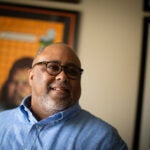 Two years after receiving her Harvard Ph.D., Italian Renaissance and Baroque scholar Shawon Kinew has joined the Department of History of Art and Architecture as an assistant professor. She is also a Shutzer Assistant Professor at Radcliffe.

Kinew was born in Canada on the tribal territory of the Anishinaabe. She was a postdoctoral fellow in the Andrew W. Mellon Foundation Fellowship of Scholars in the Humanities and a lecturer at Stanford, and has held residential fellowships with the Bibliotheca Hertziana, Max Planck Institute for Art History in Rome, and the Getty Research Institute.

KINEW: I grew up very close to the island where my dad was born on Lake of the Woods and in Winnipeg, which in some ways was a typical suburban upbringing although not at all because I was going back and forth between two places. We had a home on our reservation. Both of my parents worked for the tribal government and raised us there because that sense of place and knowing where my brother and I belonged was important. I don’t feel all that connected to Winnipeg as a home. It was where I went to school, but in terms of the place I feel connected to in a deeper way — that is our reserve, Onigaming, which is on Lake of the Woods. I spent my summers there playing with my cousins. With my family, we’d spend as many days as possible looking at rock paintings, picking up pottery shards, getting to know the islands and the landscape. And when I say landscape, I don’t just mean the land, but the mythologies and stories attached to those places.

GAZETTE: Where did you begin your academic career?

KINEW: I did my honors B.A. at University of Toronto. I quickly realized in my first year of college that I wanted to study early modern Italy. The discipline just opened up to me in Toronto in a whole new way. For me, it was only when I was traveling in Italy, when I was visiting churches from the 14th century or getting to know Rome, where I felt like I was finally coming home to myself in a very real way. It’s that combination of the two, having been connected to the land and the stories and the rock paintings back home in Canada and also being able to pursue my research in Italy that felt like: This is it, this is me.

GAZETTE: You will begin teaching in the spring. What courses?

KINEW: One is a graduate seminar on Gian Lorenzo Bernini and the other is an undergraduate class on Renaissance and Baroque art. This fall I’m writing a book manuscript on a 17th-century sculptor named Melchiorre Cafà and what I call his “soft sculptures.” He was a young and brilliant sculptor from Malta who traveled to Rome, which was very much Bernini’s Rome at that time. He was crushed and killed by one of his sculptures when he was my age. It’s always a reminder to me: Have I done that work yet that I can be proud of?

Cafà was ambitious. He competed with Bernini and, as a very young sculptor, was able to carve massive marble altarpieces and sculptural groups in many of the most prominent churches in Rome. There’s a bit of a coincidence in choosing this research, which I began as a grad student. I am still captivated by Cafà’s ability to transform hard stone into soft fluffy clouds and the most tender flesh. But one of his sculptures, carved in 1665, was Rose of Lima, who became the first saint born of the Americas. This sculpture was shipped from Rome and came to Lima in 1670. Already there’s a parallel track in my own life of a kind of bridging of two worlds that people have often thought of as being separate, but have a history of being in dialogue and being connected in some form.

GAZETTE: Why are you celebrating your appointment with a thanksgiving feast in the Faculty Room?

KINEW: I wanted in some ways to do something that would be meaningful in so many of the different communities I belong to at Harvard. I certainly wanted to strengthen the relationship between our indigenous students and the humanities, especially my department. To me, having a traditional feast and a pipe ceremony was a very significant way of doing this. Many of the indigenous students here will be familiar with ceremonies like this and, to be honest, don’t see these things happening at this University.

For me, ceremony is very important because I come from two strong intellectual traditions. Anishinaabe teachings and stories and ceremony aren’t always looked at as part of an intellectual tradition by outsiders, but they are. They are a different way of knowing and of being in the world. I have responsibilities as an art historian and also as an Anishinaabe person. I feel as though I need to look after and care for the Anishinaabe artifacts and objects that are on campus. We don’t characterize them as objects in our thinking or in our language. These are animate beings. Having this feast is a way to feast these spirits and to care for them in the fullest way that they exist.

As an Anishinaabe person, I’m a visitor on this land, and it’s time for me to give back to the people whose land I’m on — the Massachusetts, the Wampanoag, and the Nipmuc people. So part of the ceremony is giving thanks and honoring them. We’ve invited representatives to come feast with us.

Kinew’s thanksgiving feast and pipe ceremony, conducted by Elder Fred Kelly of the Anishinaabe, will take place Friday. An accompanying exhibition curated by Kinew titled “Aadizookaani-gamig, the place where our grandfathers are cared for: Feasting our Anishinaabe relatives” will go on display in the teaching gallery at the Peabody Museum of Archaeology and Ethnology.