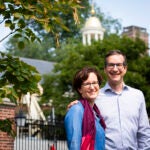 Robert Reid-Pharr was an unfocused student at the University of North Carolina at Chapel Hill in 1986 when a professor assigned historian Drew Gilpin Faust’s biography of James Henry Hammond, a book that would inspire not only Reid-Pharr’s studies but also his career path.

Reid-Pharr joined the faculty of Studies of Women, Gender, and Sexuality (WGS) in July as the first full tenured professor in the program. The author of four books, including “Once You Go Black” and “Archives of Flesh,” he has received fellowships from the Guggenheim Foundation, the National Endowment for the Humanities, and the Mellon Foundation.

Reid-Pharr will teach two courses this semester, “The Male Black Body” and “The Gender of Celebrity.”

GAZETTE: Welcome — or, more accurately, welcome back. How did your experience as a visiting F.O. Matthiessen professor two years ago set the stage for your permanent role here?

REID-PHARR: I was the third Matthiessen professor. My classes were packed with students hungry for the material. It gave me a great sense of where they are coming from, though I felt like many of them had one too many commitments. You really want to be right there present with them and have them present with you.

GAZETTE: Can you talk about your academic path, and how you came to WGS?

REID-PHARR: I taught for 24 years as an English professor at Johns Hopkins and the City University of New York. It’s interesting to now be under the auspices of the social sciences, and I’m really happy to be moving to an interdisciplinary program. I have a Ph.D. in American studies from Yale. I’m over the moon at coming to WGS at Harvard because it has an expansive opportunity, and also because I get to express the broader range of things that interest me.

I was having a lackluster college career at UNC, then I took my first-ever women’s studies course, with Jacquelyn Dowd Hall, and we read in her course a biography of James Henry Hammond written by Drew Gilpin Faust. It was an amazing account of this white Southern planter and so interestingly done and asked such interesting questions that I thought: I can do something like that. I’d never seen something like that — the idea that you could do a piece of history in a biography in that way.

It set me thinking that this world wasn’t as closed as I thought it was. It changed my trajectory. I was a junior, limping through college, then I started taking women’s studies and African-American studies, and that gave rhyme and reason to my study. I didn’t know these were things I could pursue seriously. I was one type of student and overnight I turned into another type of student.

GAZETTE: Your appointment comes at a time when many classes in the program are facing overenrollment. What about the WGS curriculum is making such a deep connection with students?

REID-PHARR: Let’s be frank about it. In 2016 when I taught here, people thought a woman named Hillary Rodham Clinton would be president. The fact that her candidacy was as strong as it was showed we have wildly different attitudes about women, gender, and leadership. It didn’t work out in 2016 like many thought. We’ve instead heard Donald Trump’s “Access Hollywood” tape and his relationship to women, seen how men comport themselves, what gender norms are in the workplace, and then the #MeToo moment.

Students aren’t showing up just because they find it interesting. These issues are at the center of what’s going on in our country in 2018 and will have a profound effect on the elections in November. I know we’re in a watershed moment in how we deal with gender, race, and sexuality for the next generation. The students are there because they’re being forced to confront these issues. I’m expecting heavy enrollments for the foreseeable future. Even though there’s real stress in who will teach the courses, it’s a good thing for WGS and Harvard and the students.