Is MS risk influenced by friends and families’ unhealthy habits? 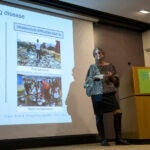 Are healthy and unhealthy habits contagious? Can a person’s friends and families influence his or her risk of disease?

A new study from Harvard-affiliated Brigham and Women’s Hospital (BWH) reports an association between the habits of people connected to a participant and that person’s self-reported level of neurological disability. The findings help lay important groundwork by developing and making accessible scalable tools to allow clinical researchers to assess social networks in a quantifiable way.

The results are published online today in Nature Communications.

“We find that there’s a strong relationship between the health habits of people in a patient’s social network and outcomes that are of interest to physicians who specialize in multiple sclerosis [MS],” said lead author Amar Dhand, a neurologist in the Department of Neurology at BWH and assistant professor of neurology at Harvard Medical School. “This relationship must not be ignored when considering an individual with neurological disabilities. We need to ask, ‘Is this person’s risk based solely on their biology, or is it influenced by the healthy or unhealthy lifestyles of those around them?’”

Dhand and colleagues developed a social network-assessment tool that can be applied to any patient population. To test it, they used the tool to measure the social networks of 1,493 people at risk of multiple sclerosis. To assess their neurological disability, participants were asked to report on several abilities, including walking, using arms and hands, vision, speaking clearly, swallowing, cognition, sensation, and bowel and bladder function.

“We need to ask, ‘Is this person’s risk based solely on their biology, or is it influenced by the healthy or unhealthy lifestyles of those around them?’”
— Amar Dhand

Using data from a cohort of participants in the federally funded Genes and Environment in Multiple Sclerosis (GEMS) Project, the team plotted a montage of each participant’s social network. They found that the average network consisted of eight people who were densely linked. The team also plotted the milieu of health habits around each participant, including exercise, smoking, and seeing a doctor. They found that the health habits of a person’s friends and family were strongly associated with the participant’s self-reported neurological dysfunction, and the percent of network members who had a negative health influence had the strongest association with disability.

While it’s still early for the GEMS Project cohort — participants have been enrolled in the study for less than five years — Dhand and colleagues plan to continue assessing the relationship between participants’ social networks as well as genetic risk and other environmental factors in the development of MS symptoms.

“We hypothesize that there is a link between social networks and neuro-immunological function, and, downstream, we plan to look at what social network features are related to disease susceptibility,” said Dhand.

Funding for this work was provided by National Institutes of Health grants K23HD083489, K08NS079493, and National Multiple Sclerosis Society RG-5003-A-2. The authors declare no competing interests.