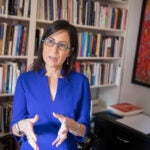 Jonathan L. Walton, the Plummer Professor of Christian Morals and Pusey Minister in the Memorial Church of Harvard University, offers a fresh perspective on the Bible’s overarching message of justice in his new book “A Lens of Love: Reading the Bible in Its World for Our World.”

In a time when some use the Bible as a weapon to reinforce outdated views on topics such as sex and gender, Walton reads the Hebrew Bible and New Testaments in the context of the ancient world, and in the process, finds affirming meaning for society today. He also takes a critical look at how, in malevolent hands, selective Bible interpretations have been used throughout history to justify slavery, genocide, racism, the suppression of women, and other injustices. Walton instead interprets the stories through the eyes of each narrative’s most vulnerable and marginalized people.

blackwell: I know the book was several years in the making, including the sabbatical you took during the 2015‒2016 academic year. What was the genesis of this book?

Walton: Two things. First, after serving the Memorial Church for a couple of years, a regular attendee came to me and said, “It’s really interesting how you frame the ancient world and make it come to life by reconstructing the cultural experiences of its characters in the ancient context. I like the way you immerse the congregation into the text to the point that I can see myself in the story.” He then asked me if I ever considered writing a book about my sermon preparation. I had not. But I took this as an opportunity to interrogate my own method of biblical interpretation.

At the same time, a group of older millennials in the church came to me looking to strengthen a connection with the Memorial Church. We focus a great deal on College students, and many older congregants have built up a tight-knit community in recent decades. These 20- and 30-something attendees felt left out. So I decided to start a Bible Study with these young adults, as I was researching and fine-tuning my approach. “A Lens of Love” is largely a result of these two interactions.

blackwell: You write in the book that these young people were also struggling to find a place in their community as people of faith.

Walton: Many of us — particularly in college and just after college — go through phases where we flee and question the faith of our parents. Life is posing different challenges. Thus, we have different questions. These young adults wanted to know how their faith might respond to pressing moral issues. Many believed that traditional interpretations of the Bible gloss over at best, and reinforce at the worst, some of our less than sublime practices as a society, i.e., racial and gender discrimination, sexual assault, homophobia, and anti-Semitism.

I believe that though the Bible was written in a world and context very different than our own, there are certain moral truths that we might consider when thinking about the ways we treat one another and how a just society ought to look.

blackwell: What is a lens of love?

Walton: When I read the Bible, whether it’s the Exodus narrative, the Hebrew prophets, or the Gospels, I see a God who cares about the least and the left behind. God sees those whom society typically ignores. A lens of love, then, is an approach that asks us to read biblical narratives with these same eyes of grace and compassion for the most vulnerable in any given story. This is why it’s important to have a sociohistorical understanding of power relations in the ancient world.

blackwell: Can you give me an example of this sociohistorical approach you describe in the book?

Walton: In the Gospels, many lessons include the people of Samaria. Recall Jesus tells the story of the “Good Samaritan” when responding to the question concerning who is their neighbor. Why does Jesus give so many illustrations using Samaritans? Because in his day the Samaritans were the people those in power in Jerusalem would have wanted to build a wall to keep out. Samaritans were viewed as religiously and thus morally inferior.

This is the kind of ethnocentrism in the ancient world that Jesus was trying to disrupt. If we’re able to see the moral response to the most vulnerable in the text, my hope is that we can apply the same moral framework to our world today. Who do we view with disdain? What groups do we often malign and scapegoat? Who are the “Samaritans” among us today?

blackwell: There are also stories and passages in the Bible that seem to contradict this portrait of a loving, forgiving God.

Walton: Wrestling for power is the perennial problem of humanity. We can read both the Hebrew Bible and the New Testament as a case study of communities wrestling for social, political, economic, and religious power. Moreover, the books that constitute the Bible are a collection of oral narratives, aphorisms, and sacred histories that span over a thousand years. Some stories were told to assert a particular group’s humanity when they were living on the underside of power. These same stories can also be used to grind others down once those same groups become the rulers rather than the ruled.

There are also some metaphors and images that the ancients used to describe God that were acceptable in a tribal world of war. There were also social arrangements such as slavery and female inheritance that biblical writers took for granted. This is why it’s important to pay attention to the overarching moral arc of the Hebrew Bible and the New Testament. I view it as the difference between taking the Bible literally or taking it seriously.

blackwell: The book comes full circle from the ancient world to the charged political atmosphere of today. Do you think your approach to the Bible can build bridges across a deep partisan divide in America?

Walton: I hope so. I believe our inability to see one another is contributing to our current toxic environment. So many of us share similar hopes, dreams, and aspirations. Yet too many politicians and preachers are feeding off fear and ignorance of the so-called other. We view each other as racial, gender, and political abstractions. Maybe this is why there are so many examples of Jesus healing the blind. Blindness is not just a physical disability. It’s a moral and ethical condition.

Therefore, my first goal is to help the Christian community see ourselves. We have a long, dark tradition of violence and hypocrisy, and need to become more self-reflective. And then if we can begin to see well-known characters of the Bible with greater compassion and empathy, we might start to look at one another with that same lens of love.