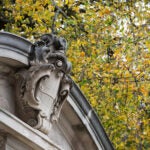 Nonpartisan program urges students to cast their ballots and be heard

As students, faculty, and staff settled in for the new semester, they may have noticed a fresh and potent drive toward civic engagement on campus.

Indeed, the newest members of the Harvard community, the Class of 2022, will fondly remember that their very first homework assignment came from President Larry Bacow himself at this year’s convocation — “to register, to inform yourself of the candidates and the issues, and then cast your ballot.”

This all ties into the Harvard Votes Challenge, a nonpartisan, University-wide effort encouraging Harvard’s Schools to increase voter registration and participation among all eligible students. National Voter Registration Day is Tuesday.

This challenge was inspired by the University of Michigan’s Big 10 voting challenge, and spearheaded here by Archon Fung, the Winthrop Laflin McCormack Professor of Citizenship and Self-Government at Harvard Kennedy School (HKS).

“At the Kennedy School and at Harvard we talk about public service and public engagement. Voting is the first, most fundamental way of walking that talk,” said Fung. “We hope that many folks will build up their taste and commitment for democratic work that will last their whole lives as a result of participating in the challenge.”

Rather than relying on the government to get out the vote, Fung said it is important for organizations and institutions to create an atmosphere conducive to voting, such as Patagonia’s declaring a corporate holiday on Tuesday. The hope is that more universities and companies will be inspired to create this type of culture.

Organizers have emphasized that the initiative is nonpartisan. Unlike efforts by political candidates and parties, it aspires only to encourage a more involved and informed public, rather than galvanizing one group or another. Regardless of students’ policy positions and views of a better world is, they are emphatically encouraged to vote and to support others to do the same.

“The Harvard Votes Challenge is raising awareness of the importance of the mid-term elections,” said Teresa Acuña, associate director for the Democratic Governance Program at the Ash Center. “The message is to vote now and in every election. It signals to the world that our democracy matters enough for me to do my duty as citizen and make it to the polls.

“As an institution, Harvard produces the leaders of the world and as a community, we should be modeling good civic habits, such as voting,” Acuña said. “Our vote is our voice and it is the only thing that will hold our elected leaders accountable and produce the change we want to see in our country.”

Notably, at HKS the goal for voter registration this fall is 90 percent, while at the Institute of Politics students are rigorously working to foster civic culture among undergraduates. Students can register via TurboVote, which was founded by Seth Flaxman and Kathryn Peters, both HKS alumni. TurboVote walks students through the voting process, sends them an absentee ballot if they’re eligible for one, and reminds them of upcoming elections.

“On elections, we voted as a family, even if we didn’t vote for the same candidates or ideas, it was meaningful to us to vote and have our say in our country’s direction. I hope that the Harvard family can do the same. While we don’t have to agree on the same ideas, we can agree that our country’s future and democracy are important reasons to vote.”