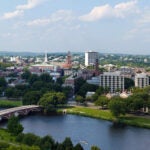 Harvard filed a response on Sept. 14 supporting a motion from students and from alumni and student organizations seeking to be heard during testimony in the admissions suit set to go to trial in October.

Students represented by the Lawyers Committee for Civil Rights and Economic Justice (LCCR), as well as more than 20 student and alumni organizations represented by the NAACP Legal Defense and Education Fund (LDF), filed amicus briefs in July and again in August in support of Harvard’s admissions policies. Most recently, they filed motions asking for their voices to be heard at trial.

Harvard’s response cited the importance of student and alumni voices. “Harvard supports Amici’s request to present testimony from Harvard students and alumni, in recognition of Amici’s position that those witnesses can offer important and distinctive perspectives on the importance of a racially diverse student body at Harvard,” the College said in its response filing.

In its own response filing to the LCCR brief, Students for Fair Admissions (SFFA), the anti-affirmative-action group founded by Edward Blum that sued Harvard in 2014 alleging intentional discrimination against Asian-American students by limiting their number in its admissions process, asked the judge to exclude students and alumni from providing evidentiary record in the case.

“The Students are no different from any number of groups that are interested in cases they are not parties to,” SFFA wrote in its response. “Those groups do not get a seat at counsel table just because they may take a different approach if they were in control of the case. The Students likewise should not be allowed to participate in trial.”

Today, SFFA filed a brief asking the judge to exclude students and alumni filing with the LDF from participating at trial.

This marks the third time SFFA has moved to keep student and alumni voices out of the lawsuit. The group also filed a memorandum of opposition seeking to strike personal declarations filed as part of their amicus briefs. SFFA filed a motion this week to preclude Blum himself from testifying during the trial.

“Ed Blum is attempting to silence the voices of actual students and alumni from diverse backgrounds who can speak to the lived experience at Harvard,” said Rachel Kleinman, LDF’s senior counsel, in a statement posted to the organization’s website. “This latest move further exposes SFFA’s hidden agenda. Rather than looking out for students, Ed Blum is simply focused on blocking programs that promote diversity, no matter the consequences.”

In an interview, Sally Chen, a Chinese-American College senior from San Francisco who filed a declaration through the Lawyers’ Committee for Civil Rights and Economic Justice, said the lawsuit pits ethnic minorities against each other and inaccurately portrays Asian Americans as a group harmed by race-conscious admissions policies.

“Blum doesn’t have the best interests of students of color at heart,” said Chen. “We should not be swayed by his efforts and that of other folks to label Asian Americans as a model minority that doesn’t need affirmative action.”

Chen believes she benefited from Harvard’s race-conscious admissions policies because she was admitted despite her less-than-perfect SAT scores and GPA. In her view, the College evaluated many factors, including the “role of her race in her life experiences and achievements” and looked at her as a “whole person.”

“These organizations have eloquently expressed their belief that race must continue to be considered in Harvard’s admissions process and have bravely shared their members’ personal stories. It is crucial that we listen to these students — not shut them out simply because they pose a threat to Ed Blum’s case,” said Kleinman.

The judge is expected to rule on whether or not to grant student and alumni testimony.