Following Bergman into the dark 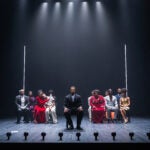 Autumnal explorations of mortality and desire, and the occasional light touch of summer, make up “Darkness Unto Light: The Cinema of Ingmar Bergman,” a retrospective showing at the Harvard Film Archive, as well as Brookline’s Coolidge Corner Cinema and Harvard Square’s Brattle Theatre, through Oct. 14.

Haden Guest, director of the Harvard Film Archive, called the Swedish filmmaker, who died in 2007, “one of the towering figures of modern cinema,” noting the continued relevance of works ranging from the popular “Wild Strawberries” (1957) to the dreamy and difficult made-for-television “From the Life of Marionettes” (1980). With an instantly recognizable style that combines stark lighting, evocative acting, and often surreal situations, Bergman’s films “deal quite unflinchingly with questions about religious faith, human relationships and their precariousness, as well as human desire and its strangeness at times,” said Guest.

“To me films like ‘Through A Glass Darkly,’ ‘Seventh Seal,’ ‘Persona,’ and ‘The Magician’ were like no other,” he added. “They confront us and force us to confront difficult questions. What does it mean to believe in a God? To believe in humanity, really? What are the limits of possibility for love when we’re confronted by the savagery and strangeness of human desire?”

More than 30 films spanning the director’s nearly six-decade-long career are being shown over the course of the festival, several with multiple screenings. The Harvard Film Archive, with its own copies of rare 35 mm archival prints, is screening 20 films (including the three works of the faith trilogy, “Through a Glass Darkly,” “Winter Light,” and “The Silence”). The Brattle is showing 11 films, while the Coolidge Corner is showing five, including a screening of “Wild Strawberries” at sundown Sept. 26 at Mount Auburn Cemetery.

“Being in a darkened theater, there’s nothing like that — there’s you, the screen, and strangers, and that combination is magical.”
— Haden Guest, Harvard Film Archive director

To some extent, the city-wide nature of the retrospective was a happy accident.

“Our booker, Connie White, was approached by Janus Films, which has rights to many Bergman films,” explained Beth Gilligan, director of development and marketing for the Coolidge Corner.

In New York, she said, a similar retrospective was screened entirely at the Film Forum. For Boston, however, “they were thinking it was almost too much for one organization, and this gives it more of a celebratory feel,” she said, with films “all around town, rather than in one place.”

These screenings also allow viewers to see the films as they were meant to be seen: in a theater.

“It’s so important to see films on the big screen,” said Guest. A properly projected film represents “the true dimensions of Bergman’s films,” he added.

Of course, many of Bergman’s films are now available on DVD and Blu-Ray. Criterion, Guest noted, is putting out a deluxe set for the centennial. “It’s great that these works are going to be more accessible,” he said.

Still, the theatrical experience is unmatched, in his view.

“You watch something at home and you’re always in a state of distraction,” Guest said. “There’s always something to pull you out. Being in a darkened theater, there’s nothing like that — there’s you, the screen, and strangers, and that combination is magical.”