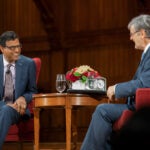 A program that offered financial incentives to both patients and their physicians to control low-density lipoproteins (LDL) cholesterol could be a cost-effective intervention for patients at high risk of cardiovascular disease (CVD), according to new research led by Harvard T.H. Chan School of Public Health.

The study showed that the shared incentive program provided reasonable value even when accounting for additional costs, such as electronic pill bottles to monitor drug adherence, more frequent cholesterol measurements, administrative expenses, and the actual cash incentive, which maxed out at $1,024 per year, split between the doctor and patient.

“Financial incentive interventions are only effective sometimes. When these programs show health benefits, the next question should be whether the health gains are worth the added costs, which is what we modeled in this study,” said lead author Ankur Pandya, assistant professor of health decision science.

The study was published today in JAMA Network Open.

CVD is the leading cause of death and health care costs in the U.S. The use of cholesterol-lowering drugs known as statins, which are cheap in their generic form, are proven to help prevent CVD. Yet long-term adherence to these medications is below 50 percent. One proposed strategy to improve adherence rates and lower LDL cholesterol — often referred to as “bad” cholesterol — is offering financial incentives, but it’s unclear if such programs are worth the costs.

To determine the cost-effectiveness of financial incentives, the Harvard Chan researchers, along with colleagues from Brigham and Women’s Hospital and the Perelman School of Medicine at the University of Pennsylvania, developed a model-based analysis that simulated CVD progression.

Chan School researchers used the CVD model, developed by corresponding and senior author Thomas Gaziano, to simulate lifetime CVD progression among a cohort of 1 million patients that mirrored the 2015 study population. Results showed that the shared incentives program had an incremental cost-effectiveness ratio (ICER) of $60,000 per quality-adjusted life year (QALY), a metric that reflects how much money is required to produce one year of high-quality life with a particular intervention. Under current standards, ICERs between $50,000 and $150,000 per QALY represent “intermediate value.” The researchers said the findings demonstrated that the shared financial incentives program provided reasonable value for the health gains it produced compared with programs that offered financial incentives to only the patient or only the doctor or offered no financial incentive at all.

Importantly, the researchers found that the cost-effectiveness of the shared incentives intervention hinged on how long the LDL benefits persisted. They concluded that the shared incentives strategy with at least five years of follow-up warranted a large-scale study in a real-world setting by the Centers for Medicare and Medicaid Services or private health care payers.

“Combining financial incentives for providers and patients with advanced technologies to monitor compliance, including electronic pill bottles, has the potential to improve patient care while remaining cost-effective, and this strategy should be further evaluated,” said Gaziano, assistant professor in the department of health policy and management at the Chan School and director of the global cardiovascular health policy and prevention unit at Brigham and Women’s Hospital.