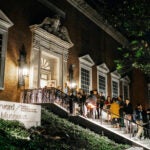 Here’s a selective guide to happenings in music, theater, art

Starting this semester, you probably expect to spend plenty of quality time buried in work and studies. While we wouldn’t discourage that, we also need to remind you that you’re in a culturally rich city, one where there’s no lack of art, music, and theater to fill off-campus hours. Here are a few highlights for the fall, so you can schedule some fun.

This season’s music slate ranges from the momentous to the downright bizarre. In the latter category, Roy Orbison becomes the first dead artist to play Boston as a hologram (Nov. 3 at the Orpheum — for the record, a larger place than the Channel, the now-defunct club where Orbison played his last Boston show alive). Not dead, but certainly dark and edgy, is Trent Reznor of Nine Inch Nails, who plays the Wang Theatre on Oct. 19 and 20. Getting tickets for that show has been an adventure in itself — organizers used alternative ticketing to foil scalpers, which meant fans had to line up for an entire day — but that will make the experience sweeter for those getting through the doors.

Tickets are still available to see Courtney Barnett, the Australian songwriter who has rightly become one of the most buzzed-about rockers of recent years. Combining rough-edged garage rock with a Dylan-esque sense of wordplay, Barnett is not only brilliant, she’s also a huge fan of Boston music: When we saw her last year she snuck a couple of Breeders’ and Lemonheads’ covers into the set. Barnett plays the House of Blues on Oct. 21.

In fact, it’s a banner season for songwriters, since three of the finest will hit town this fall: Richard Thompson (Paradise, Nov. 14), Lucinda Williams (Paradise, Nov. 5‒6), and Elvis Costello (Wang Theatre, Nov. 10). The Costello show should be a little special, both because he won a cancer battle earlier this year and because his forthcoming album “Look Now” has the soul and the killer hooks of vintage E.C. As for Williams, she’s the queen of alternative country, and if she’s ever played a less-than-impassioned show, we haven’t seen it.

If you love alternative country, this fall offers a unique chance to see where that all began. Back in 1968, a landmark Byrds album called “Sweetheart of the Rodeo” was released and … nothing happened, because nobody wanted to hear long-haired hippies play country music. Fifty years later, the album is an enduring classic, and Harvard Class of ’69 dropout Gram Parsons — who created that album with founding Byrds members Roger McGuinn and Chris Hillman — is enshrined as a musical deity. Parsons left us in 1973, but McGuinn and Hillman have reunited with modern-day disciple Marty Stuart to play the whole of that album and a bunch of other Byrds classics at Emerson’s Colonial Theater Sept. 26.

It’s also a good time to catch up on some Boston musical history. Forty years ago, a scruffy group called the Modern Lovers played most weekends on Cambridge Common, doing attitudinal songs about the singer’s lack of a girlfriend. That was more or less the beginning of punk rock in Boston, but the band’s ex-leader, Jonathan Richman, has since carved out a career as an acoustic troubadour, doing poignant and whimsical riffs on love and life. (You may have caught him in the movie “There’s Something About Mary.”) His annual fall shows at the Middle East in Central Square are always a delight, and he’s there from Oct. 15‒18 this year. We hear he’s even got a girlfriend now.

Back in the ’90s, the toast of Boston was a band called Letters to Cleo, a hyperactive pop/rock band with a dynamo of a singer named Kay Hanley. (How good was she? Well, in the next decade she got the job as the featured singer in Miley Cyrus’ show, standing off in the shadows and belting all the songs out when the star was busy twerking.) Most of the band members are based in Los Angeles now, but they make occasional reunion swings. They tore the proverbial roof off the Paradise last year. There’s no reason to think it won’t happen again when they play on Nov. 16‒17.

We noted last winter that the musical “Hamilton” was coming to Boston. There have been months of additional advance hype since then, which means that face value tickets for the show, which just opened a two-month run at the Opera House, are going to be even tougher to come by. One worthy alternative is “The Black Clown,” a world-premiere musical running through Sept. 23 at the American Repertory Theater. The show uses Langston Hughes’ 15-stanza poem as a jumping-off point for the black American experience, incorporating blues, gospel, and jazz, along with choreography that stretches from Josephine Baker to hip-hop. The defiant and empowering tone of Hughes’ poem is maintained throughout.

Nothing so relevant is promised in the forthcoming Emerson Colonial Theater production “The Play That Goes Wrong,” but it sure looks like fun: The show chronicles what happens when a 1920s murder mystery is performed by a troupe that’s not up to the task, including a corpse that insists on moving. If you remember the ’80s Broadway hit “Noises Off,” you’ve got the gist of this intentional theatrical train wreck. The two-week run opens at Emerson on Nov. 7. And if you need somewhere to take your folks for Parents Weekend, you could do worse than “Rock of Ages,” the hit musical about Sunset Strip metal decadence circa 1980s, featuring a soundtrack full of Styx and Def Leppard (both of whom played Boston for real this past summer). The show, at the Boch Center in Boston Oct. 23‒27, celebrates its 10th anniversary this year, meaning it’s time to get nostalgic about nostalgia.

A different kind of history is on view this month at the Institute of Contemporary Art, whose current show “We Wanted a Revolution: Black Radical Women, 1965–85” documents an era when women of color were creating new forms of expression in visual art, along with performance, film, and video. As a Boston Globe review recently put it, these artists were “throwing conceptual grenades” by opening their work to radical social and political movements. The show runs through Sept. 30.