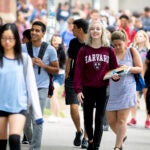 A pre-veterinary student used drones to study beaver dams in Montana. A senior majoring in chemical engineering researched how to make nontoxic batteries. A sophomore in chemistry got a taste of nanomedicine. Three other students examined bacteria from the gut microbiome as part of research to improve diagnostic tests of infectious diseases.

Their projects were different, but the six students who took part in the Research Experiences for Undergraduates program at the Harvard John A. Paulson School of Engineering and Applied Sciences (SEAS) had more than one thing in common. All of them were young, female, Native American scientists.

The summer program brings students from universities and colleges across the country to perform cutting-edge research in fields such as biomaterials and nanoscale science and engineering, under the auspices of the National Science Foundation. The 10-week program has grown over the years, said Kathryn Hollar, director of community engagement and diversity outreach at SEAS, and the application process is very competitive. This year, 700 students applied for 70 slots, six of which were taken by Chelsea Draper, Trisheena Kills Pretty Enemy, Kylie Ray Lee, Naomi Redfield, Dominique Pablito, and Racquel White, who together made up the largest group of Native American students yet be enrolled.

Increasing the number of Native American participants in the program is an effort that the School takes seriously, said Hollar. “Science and engineering are better off when we have people of different cultures and perspectives, because it leads to a richer set of ideas and questions,” she said. “This is also a social justice issue. We have very few Native American scientists and engineers, and it’s our responsibility to provide opportunities for all groups of people that have been historically excluded.”

Building partnerships with tribal colleges and universities in places with large Native American populations has helped increase their representation in the research program. Its significance is not lost on Jason Packineau, community coordinator at the Harvard University Native American Program.

“There are many talented Native students in STEM (science, technology, engineering, math) throughout the country,” said Packineau. “Hopefully, having these students here will increase the visibility that Harvard is an option for them.”

Having more than one Native-American in the program helps keep the students from feeling isolated, alienated, and like token figures, said Packineau. “They’re not singled out as the only Native participant in the program. [They] arrive with a set of peers who have the potential to provide support and share the same background, and, finally, leave Harvard connected to individuals whom they’ll continue to interact with in future academic and professional settings.”

On a recent afternoon, the three students who worked on the bacterial tests study sat in a classroom with their mentors, postdoctoral fellows Chris Abrahamsson and Michael Fink, members of the George Whitesides research group.

The students were able to work in Whitesides’ lab as they studied how to separate bacteria, mostly E. coli and Staphylococcus, using different combinations of aqueous solutions. Kills Pretty Enemy, a microbiology senior at Montana State University, said the work was exhilarating and helped her think more independently.

“This was exploratory research,” said Kills Pretty Enemy, a member of the Apsaalooke Crow and the Hunkpapa Lakota tribes. “There wasn’t a protocol. We had to make it as we went. It taught me how to think on my own. It was fantastic.”

Being surrounded by other science students was one of the program’s highlights for Lee, a chemistry major at the University of Utah and a member of the Cowlitz tribe. “I was able to talk to other science majors without having to explain what is material science or what is nanomaterial fabrication,” she said. “Instead, we all talked about our own research. It was really awesome.”

Pablito, a senior studying chemistry and biology at the University of Utah and a member of the Zuni tribe, missed several cultural events and powwows held at home over the summer. But it was worthwhile. “It was cool to see how other people do research,” she said. “It was also great to experience other cultures and see new cities.”

White, a chemical engineering student at Navajo Technical University, said she will miss Whitesides’ lab, but now plans to apply to grad school. “I have always wanted to come to MIT or Harvard,” she said.

Draper and Redfield, too, now plan to go to grad school. “It was a door-opener,” said Draper, a chemical engineering student at the University of New Mexico and member of the Navajo nation. Pre-vet Redfield, a Montana State University junior from the Crow reservation, called it “a dream come true.”

“Now I want to learn more to help my community,” she said. “I’d like to do research on buffalos, elks, mountain lions, and all the wildlife we have in the reservation to help protect it as much as possible.”