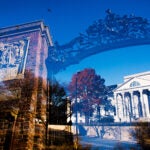 Researcher, student share more than an interest in new treatment

Last year, while walking through campus, Linh Nam ’20 felt something in her leg buckle.

A survivor of osteosarcoma, the most common type of bone cancer, she had a bone graft to save her knee when she was 10 years old; now, just 10 years later, the metal plate meant to reinforce the new bone had failed due to years of bearing her weight. Nam was offered two choices: try another bone graft — this time vascularized, or infused with her own blood vessels, to further encourage bone growth — or undergo a total knee replacement.

“The doctor said the knee replacement would have to be repeated every 10 years,” Nam says. “If I lived to be 80, I’d need seven of them.” She has already had 10 surgeries since her diagnosis due to complications.

She opted for a new graft with bone harvested from her tibia — the last chance at salvaging her original knee. Although there have been signs of bone growth since her December surgery, the site has not completely healed, and Nam has spent the months since on crutches.

While looking for a summer job after her second year at the College, Nam came across a listing on the student employment website for a summer Radcliffe Research Partnership.

Seeking student assistance was Professor Hala Zreiqat, RI ’17, a biomedical engineer who had returned to the Radcliffe Institute as a summer fellow to continue research on a project titled “3D Printing of Ceramics Using Advanced Layer by Layer Technologies’ Medical Devices.”

“When I read the description, I thought, ‘Wow, this is quite relevant, given my experience,”’ said Nam, a human evolutionary biology concentrator. She applied.

Zreiqat, for her part, noted that there was an applicant with a history of osteosarcoma — but it was Nam’s scientific background that ultimately won her an interview. It was only when the student arrived at the meeting on crutches that Zreiqat made the connection. “I thought, ‘My goodness, that’s the one with osteosarcoma.’” A personal and layered scientific match was made.

Zreiqat has herself experienced the limitations of the clinically available bone substitutes (she once traveled to Germany from Australia to undergo a procedure in which bone was harvested from her mandible). She has also seen family members faced with the prospect of multiple joint replacements over the course of a lifetime. Her team at the University of Sydney’s Biomaterials and Tissue Engineering Research Unit has developed a 3-D-printed bone substitute out of a ceramic-based material, one they hope will mean better treatment options for people who suffer bone loss.

When harvesting bone from a patient’s own body, a much larger sample is taken than the injury site requires, so the supply is naturally limited. Other options include donor bone — usually from a cadaver — whose structural integrity has been compromised during processing, such as by irradiation. The last option is metal, which, while strong, does eventually wear down.

The bone substitutes developed by Zreiqat and her lab are a much-needed additional option for patients who have bone defects: nontoxic, strong, and stable, they also encourage growth in the patient’s own bone, negating the need for metal implants.

Zreiqat thinks that her 3-D-printed implants could reach the public as early as 2019, but while she waits, she continues to innovate 3-D-printed medical devices with other musculoskeletal applications. And Nam? She wants to ensure that no one else has to endure what she did and is now planning to study medicine.

The Radcliffe Institute is accepting applications for the 2018‒19 Radcliffe Research Partnership program. To apply or for more information, visit the program’s website.