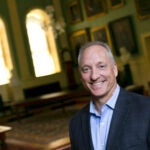 Mike Smith recalls his road traveled, and outlines path ahead

The only child of immigrants from India, Meena Venkataramanan was unsure how to respond to her acceptance email from Harvard College. Then came a phone call from a coordinator at the admissions office’s Undergraduate Minority Recruitment Program (UMRP). The coordinator explained how, “as a person of color, they had really found a home there,” said Venkataramanan, and the chat helped convince her Harvard “was the place for me.”

Venkataramanan said few students from her home area around Tucson, Ariz., attend Ivy League schools. A sophomore who plans to concentrate in English or government, Venkataramanan wants to make sure students understand the many choices they have for higher education. After arriving in Cambridge, she became a hometown recruiter for the UMRP, heading back to Arizona over winter break to meet with students from schools in and around Tucson, including in Nogales, a town on the Mexico border where students are almost entirely Latinx, she said, and where there’s a misconception that the “students there don’t care.”

So many teens turned out for her talk that it had to be moved from a classroom to the auditorium. “That was honestly the most rewarding thing,” said Venkataramanan, along with the news that a student from the school had recently been accepted to Harvard College.

Since 1971, the UMRP, a program of Harvard Admissions and the Financial Aid Office, has worked to raise awareness about Harvard’s diverse campus and application process among minority middle and high school students. Harvard’s oldest recruitment program, the UMRP is part of a range of efforts aimed at encouraging students from all backgrounds to consider applying. In addition to the UMRP, the office supports the Harvard First Generation Program, which promotes College awareness to future first-generation students; the Harvard College Connection, a digital media effort that encourages qualified candidates to apply; and the Harvard Financial Aid Initiative, which raises awareness of College affordability for students interested in higher education.

Given the importance of financial aid to so many prospective students, the programs work closely with the Office of Financial Aid, whose mission is to ensure that a Harvard education is affordable for all. About 55 percent of students receive need-based scholarships and pay an average of $12,000 per year. Twenty percent of parents who send their children to Harvard pay nothing.

Students who have reached out to Harvard and opted to receive information via email about the College experience, as well as students who have taken an AP exam or received strong results on the SAT, constitute a broad search list that admissions officers refer to when identifying candidates who might fit well at the College.

“At the UMRP, we reach out to students on our search list who self-identify as Asian-American, African-American, Latinx, or Native American,” said Tia Ray, senior admissions officer and the program’s director. “Our corps of undergraduate coordinators correspond with thousands of students via email, phone calls, and sometimes in-person meetings. They talk about the wide variety of organizations that we have and the various opportunities for involvement at Harvard, from cultural and identity-based groups to performing-arts groups, pre-professional groups, and so on.”

The UMRP employs students during summers and academic years to help with its outreach. About 10 undergraduates work in the office during the fall and spring semesters, answering emails and phone calls and helping coordinate visits to campus. During the January term, the office hires 15‒20 more College students to return to their hometowns to promote Harvard at local middle and high schools.

For Ray, spreading the word about higher education is key to the program’s mission.

“Our efforts are not solely intended to encourage students to think about applying to Harvard. I consider our outreach successful if we spark an interest in researching and applying to college more broadly,” said Ray, who graduated in 2012 and immediately began working full-time in the admissions office.

Ray, who studied anthropology and history and science as an undergraduate, herself credits the UMRP for inspiring her to apply to Harvard. A first-generation College student who self-identifies as Native American, she grew up in southeastern California and “thought attending college was a possibility, but I was never really sure it would actually happen for me.”

Then a note from UMRP students landed in her inbox, describing their experiences on campus.

“I received an email from two UMRP coordinators discussing the Native American community at Harvard and the financial aid program. After that, I began to consider applying.”

After she was admitted, she worried about being able to cover the cost of attendance until she received Harvard’s financial aid package and was “blown away at how affordable it was to attend.”

A trip to campus for Visitas weekend, at which she was hosted by a Native-American student, sealed her decision.

“I remember thinking that I could identify with her in so many ways. We were both from small towns and identified as Native American. She discussed her experiences at Harvard and taught me about the history of the Harvard Indian College. Involvement in a Native American community was something that I was looking for in a college experience,” Ray said.

Ray’s connection to Harvard’s UMRP has extended to her life post-graduation and offered up a critical first step in her career.

“I can’t imagine a better job to have right out of College,” she said. “I’ve learned so much about different cultures and experiences. This job has prepared me in so many ways to think about the world and my place in it.”

Similarly, Venkataramanan said her recruitment work has far-reaching implications. She considers diversity at college campuses across the country key to successful education and critical for a productive society. “I believe that conflict often stems from misunderstanding … and a lot of that can be attributed to the fact that people don’t know what other people are like,” she said. Meaningful early interactions with people from different backgrounds, Venkataramanan added, “can really solve a lot of those problems.”

For junior Juliana Lamy, the daughter of Haitian immigrants who had dropped out of school to support their families, Harvard was “was more like a concept” than a reality, Lamy said, “never really something that I thought that I would ever be able to attend.”

When she was 3, Lamy moved with her parents and siblings to southern Florida. Eventually one of her older brothers became the first in the family to graduate from college. It was a proud moment for her mother and father, who knew his degree “was a ticket to a life that they could never really imagine for themselves,” recalled Lamy.

A talented student with exceptional academic credentials and varied interests, Lamy was encouraged to apply by her high school guidance counselor. She did and was accepted, but it wasn’t until she received a call from the UMRP that her decision to attend became final.

“They were actually one of the deciding factors for me when choosing what school I wanted to go to,” said Lamy. “Knowing that Harvard was dedicated enough to enlist their minority populations to have a group like this was extremely comforting, and it was definitely something that I wanted to get involved with … it just really, really felt like the University was making a concerted effort to make minority groups, and groups that weren’t traditionally represented at schools like this, feel comfortable.”

Ensuring that others feel comfortable at Harvard has been a priority for Lamy. After her first year, she worked as a summer UMRP coordinator, reaching out to prospective, academically excellent students from diverse backgrounds, providing them with information about the Harvard community and application process, and helping dispel long-held myths about exclusion among Ivy League schools. She plans to become a hometown recruiter as well.

“I think that a lot of the students whom I would like to visit would be absolutely shocked but very much delighted to find out that this place is as diverse as it is,” said Lamy, “and that the students are as nice as they are.”

According to Roger Banks, senior admissions officer and former UMRP director, during much of its history Harvard, like similar schools, did not give much thought to student recruitment. When the Civil Rights Movement and other social unrest helped draw attention to the matter, initially minority students at the College coordinated with the admissions office on an informal basis to help with recruitment.

“Eventually, with budgetary aid from the president’s office, the UMRP was created as a formal unit of activity within the admissions office itself,” said Banks, who ran the program for close to 20 years beginning in 1992.

The UMRP also began what has become one of the University’s more cherished rituals, the spring visiting weekend of activities and events for prospective College students known as Visitas. According to Banks, the program started as a way to help introduce minority admitted students to campus and make them feel welcome, but the effort quickly expanded as officials realized it was something that could benefit all admitted students.

Though she had been planning to matriculate at Barnard College, Bianca Rodriguez came to Visitas in the spring of 2016, and was hosted by a Mexican-American UMRP student and experienced firsthand the diverse community. “One of the things I wanted when I came to a university was to have a strong Latinx community that would be there for me, that would not replicate, but would remind me a lot of home,” said Rodriguez, a junior.

Since middle school, Rodriguez’s goal had been a college degree. She had known that Harvard existed but never thought one day she would be a Crimson undergraduate. “As a first-generation, low-income Latina in the southern part of Texas, that’s not something I thought could be possible,” said Rodriguez.

But thanks to a strong work ethic, a rigorous schedule, a stellar academic record, and supportive high school teachers who encouraged her to apply, she did so, was accepted, and found that Harvard’s generous financial aid made it affordable.

Eager to help spread the message about Harvard, Rodriguez is a UMRP summer coordinator, spending her days guiding students around campus, answering phone calls and email queries about the admissions process, and reassuring students worried they aren’t doing enough.

“I am always trying to tell them it’s a whole-person review,” said Rodriguez. “There’s so much more to it than just your ACTs. It’s who you are as a human being, the extracurricular activities that you do, the way you want to spend your time, your passions, all the facets of your life.”