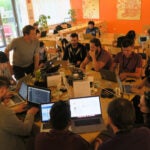 These days it’s not always enough to suggest to friends “Let’s grab some coffee” or “How about a beer?” People often expect far more information before committing: What kind of coffee is it; how is it prepared; where are the beans sourced? Or, what brewing style is the beer; how hoppy is it; what’s the alcohol percentage; and is it a limited or seasonal batch?

It seems everyone’s a gourmet now. What accounts for the shift in American culture from food as sustenance toward a European sense of food as entertainment? Perhaps it’s the ubiquity of the Food Network and obsessive shows like “Top Chef” and “The Great British Baking Show,” or the popularity of the late chef Anthony Bourdain’s globe-trotting travelogues, in which food also served as a navigational guide and cultural bridge.

The cachet of displaying a sophisticated palate and speaking fluently about complex food and beverages — particularly artisanal products like craft beer, coffee, chocolate, and wine — have boosted attendance at classes on how to buy, prepare, and serve, but most of all appreciate them.

Getting beyond the food itself, what’s the best way to become a connoisseur?

Author Malcolm Gladwell once popularized the theory that what separates the talented from the expert is time — 10,000 hours, to be exact — studying, practicing, and developing a skill set, but that notion has been largely discredited in recent years as too simplistic. Despite its significance to marketers and students of consumer behavior, the process by which people evolve from beginners to aficionados is still not well understood.

A new Harvard Business School (HBS) working paper digs into this question, finding that consumer behaviorists recognize not two but three distinct stages of learning when it comes to taste: novice, enthusiast, and expert. The paper also tests which approaches are most effective for people trying to master complex food and beverages.

Fascinated by consumer psychology and by how susceptible buyers are to influence, Kathryn Latour, associate professor of marketing services and  Banfi Vintners Professor of Wine Education and Management at Cornell University’s S.C. Johnson College of Business, and John Deighton, Harold Brierly Professor of Business Administration Emeritus at HBS, wanted to know whether dissection, comparison, and the traditional tools used in wine and food education, such as flavor wheels and grids, were really helpful.

Trained as a sommelier, Latour said a clinical approach to wine tasting and education becomes flavorless. “Like other people in the field, I became disenchanted with that approach of how to taste wine,” she said.

While asking dozens of professional sommeliers how they became experts, Latour said many complained that after they’d reached a certain level — such as mastering the taste grid used to identify aromas resembling tobacco, fruitcake, and even horse saddles — the initially helpful chart began to turn the tasting into a rote, mindless experience: “hitting the grid and checking the boxes” instead of really experiencing the vintage in front of them, she said.

Analysis is useful for beginners who want to explore and understand a product’s basic components and the techniques involved in making it, the researchers say. But after someone can explain the different brewing processes for a saison and a lambic or identify by taste the region and altitude where a coffee bean was grown, the analytical approach stops being effective, Latour and Deighton say.

As with other areas of learning, relying too heavily on a narrow lexicon or jargon — what’s known as “verbal overshadowing” — eventually can cause enthusiasts to fixate on the words rather than on the tastes. “So if I tell you to look for tobacco [aroma] in the wine, that might actually get in the way of enjoying or remembering the wine. You’re not forming your own impression. You’re employing the categories that others have imposed on you,” said Deighton.

To develop an expert sense of taste, the paper suggests, enthusiasts should put down the flavor wheels and grids, ditch the buzzwords, and adopt a more holistic approach. Though “holistic” is an imperfect description, Latour and Deighton use it to suggest a learning style that’s less verbal and tied to reductive comparisons and more visual and narrative-driven.

Through a series of experiments, they found that enthusiasts who processed their impressions of tastes as shapes or pictures and memorialized the moments in brief stories rather than just listing attributes, were able to recognize coffee, chocolate, wine, and beer more like experts, and often had better recall of wines than enthusiasts who stuck to the analytical model. By decoupling tastings from specific flavor expectations, enthusiasts are freed up to come to their own conclusions.

“The best thing you can do is interrupt their reliance” on the usual tools “and let their imaginations fly,” said Deighton.

The pair hope the paper will spur further research, perhaps by helping to design learning strategies for enthusiasts, an important, understudied consumer class. They also hope their work will offer insights to improve food and beverage training and provide practical advice to marketers.

Just as much, they hope to save enthusiasts from boredom.

“One of the things about experts is that they continue to be curious … and keep an open mind,” Latour said. “I think part of the holistic training is to get the enthusiasts not to close down their thinking and to become more open.”