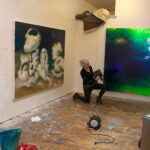 Laura van den Berg teaches fiction workshops as a Briggs-Copeland Lecturer in Harvard’s Creative Writing Program. In her new novel, “The Third Hotel,” van den Berg writes about a young widow who travels to Cuba after the death of her husband, a horror film scholar. Born and raised in Florida, van den Berg has published two story collections and the novel “Find Me,” which was longlisted for the 2016 International Dylan Thomas Prize. We talked to her about formative slasher movies, losing your bearings, and having the good fortune of writing “The Third Hotel” in a haunted house.

GAZETTE: When did your interest in horror films develop?

VAN DEN BERG: I started watching in college. There were all these slasher films — the “Scream” movies, “I Know What You Did Last Summer” — and this, to my mind, was around the time when the “final girl” trope — the last female character alive to confront the killer — entered into the popular lexicon. Being scared by a movie offers a safe catharsis, because the terror is confined to the screen. It’s an adrenalin spike, and when I come back down, I feel a bit more leveled. And the best horror has a way of distilling really potent human questions, by using extreme dislocations of reality to explore human questions that are fundamental and central: instability around trust and intimacy; the idea that your secrets will undo you; our inability to reckon with history and the cost of that looking away; the peculiar doors that transformative experiences, from grief to parenthood to trauma, might swing open. As a writer who naturally veers toward the strange and the disorienting, the genre always resonated for me.

GAZETTE: How did you come to set “The Third Hotel” in Cuba?

VAN DEN BERG: There were converging reasons. When I’m between projects, I keep a journal I call a “thought log,” and it’s my practice to write down whatever interests me. For a while, a handful of subjects kept coming up — travel, in the context of both work and tourism, horror films (including a film called “Juan of the Dead,” regarded by many as Cuba’s first horror film), marriage, and so on. So I had this constellation of narrative elements, some of which I sensed might be conversant with contemporary Havana.

I was born and raised in Orlando, a place where economy and culture have been powerfully shaped by tourism, so I’ve long been interested in that landscape, and when the U.S. travel restrictions to Cuba were loosened, Havana was suddenly the toast of every American travel magazine. I became interested in how the city was being narrated — what was being highlighted, what was getting left out entirely.

Later, I attended a talk at Harvard’s David Rockefeller Center for Latin American Studies given by Paloma Duong, who is in the global studies and languages department at MIT. She was speaking about consumer culture in contemporary Havana and I was struck by the similarities between the vocabulary used to discuss tourism and cinematic language: lenses, gazes, angles. That was one moment where I began to see how cinema and travel and tourism could all intersect.

GAZETTE: How long has the thought log been part of your writing process?

VAN DEN BERG: Maybe five or so years. For this book, I had been taking notes and assembling these little pieces for a long time, but I didn’t know how they’d fit together. Then I had a fellowship from January to June of 2015 at Bard College. Two things happened at Bard that made the setting feel lightly supernatural and really shaped the world of the book. One is that I am fairly sure the house I was living in was haunted. There was a set of pull-down attic steps that would unfold in the middle of the night. I’d walk out in the morning and it would be unfolded and you’d look up into this dark abyss. My dog isn’t a senseless barker, and he would sit in the corner and bark and bark. During that fellowship, I also received some difficult family news. When I got the call, I was driving and I drove my car into a shallow ditch. Working every day in a setting that felt ghosted definitely bled into the story.

GAZETTE: Have you taught horror in your creative writing courses here?

VAN DEN BERG: I teach fiction in my workshops and some of the readings could be classified as horror. For example, “House Taken Over,” a short story by Julio Cortázar, is a work I regularly teach. It’s about adult siblings being pursued by an unnamed presence in the house; the space they occupy gets smaller and smaller until they are forced out on the street. The story can be read many different ways — as a character study, as a political allegory, as a psychological horror. The unnamed menace is made more powerful by the layers and the ambiguity.

GAZETTE: In “The Third Hotel,” your protagonist Clare’s inability to separate reality from imagination fuels the narrative. Can you talk about this state of grief?

VAN DEN BERG: In my own life, I have found grief to be enormously distorting, particularly if it’s sudden or extreme in nature. What made sense doesn’t make sense anymore. The rules of your life have been dismantled, and the way you track the world doesn’t work. With Clare, my interest resided in how she would respond to this state of profound unmooring. Her anchor has been pulled up and she’s lost her bearings in an extreme way. Also, she is a solo traveler, which I find heightens whatever emotional state one is in. There’s no getting away from yourself.

GAZETTE: There is so much death and decline in the book. Can you talk about the constellation of themes?

VAN DEN BERG: Dynamic layering is something I’m always aspiring to. How those layers come to be is a slippery process, and in a lot of ways one that happens on an unconscious plane. I keep my thought log, which bleeds over to my writing. I travel. I think about the dynamics of travel. I think about transit spaces, those zones of intimacy and anonymity. I think about how we talk about the places we go to. I listen and I watch and I read. All of that matter informs the pages.

In the early drafts, I’m trying to let the world live; in the later ones, I’m trying to think more strategically. Zadie Smith has a great essay called “That Crafty Feeling” in which she talks about building a novel with scaffolding — how it can help, and also remembering to take it down later in the process. We use all sorts of false architecture to build our worlds and then we have to disassemble those materials.

Both my novels underwent many permutations that were wholly necessary. The inherent challenge is to force yourself to confront where you’ve been fearful and where you’ve been lying to yourself, or the project’s growth will be seriously impeded. In my first novel, I hung on to scaffolding way too long. I worried that if I pull out this piece, the whole Jenga tower would collapse. The most liberating thing I did at a residency — this when I was working on my first novel in the summer of 2013 — was delete 100 pages of my book in a fit of delicious clarity. I emptied the trash and threw out my flash drives. Alas, this discovery occurred late in the game, in year six!

With my second novel, I was a little more ruthless. If I read a chapter and felt nauseous with dissatisfaction, I deleted it — even if there was a blank space there for a while. I wanted the book to have this feverish, hallucinogenic quality and I wanted it to be as compact as possible, so if something didn’t feel essential, I got rid of it.

Van den Berg will be joined by her husband, fellow fiction writer and Briggs-Copeland Lecturer Paul Yoon, for a conversation about “The Third Hotel” Tuesday at Harvard Book Store.