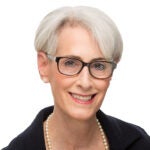 Cornell William Brooks, former president and CEO of the NAACP, Civil Rights attorney, and ordained minister, has joined the Harvard Kennedy School (HKS) as professor of the practice of public leadership and social justice. He is the first leader of a national Civil Rights organization to join the School’s senior faculty.

Brooks will teach courses, advise students, and launch and direct the William Monroe Trotter Collaborative for Social Justice at the School’s Center for Public Leadership. He will also be a visiting scholar at Harvard Divinity School.

“We are delighted that Cornell William Brooks will bring his unique background in Civil Rights law, policy, and activism to the Kennedy School,” said HKS Dean Douglas Elmendorf. “The William Monroe Trotter Collaborative for Social Justice will be a focal point for students and faculty from across Harvard University who are interested in teaching, research, and achieving excellence in the practice of social justice. Under Cornell’s guidance — and drawing upon his experience and knowledge — we expect the collaborative to have a transformational impact on our ability to prepare students to be leaders in public service and social justice.”

The vision for the Trotter Social Justice Collaborative is that it will promote excellence in the practice of social justice by supporting applied research and the use of evidence in advocacy and activism. The collaborative will connect faculty, students, scholars, practitioners, nonprofit institutions, and institutions of faith — providing research and field-based learning opportunities to faculty and students, and equipping leaders of local and national organizations with ideas, policy expertise, and best practices to maximize their impact on social justice. Thus, the collaborative will serve as a public policy and public leadership clinic for social justice. The collaborative honors the legacy of William Monroe Trotter, the first African-American Phi Beta Kappa graduate of Harvard, founder of the Niagara Movement, founding influence of the NAACP, and a pioneering activist.

“When we think of great public leaders of the past — people like Susan B. Anthony, Sojourner Truth, Eugene Debs, Cesar Chavez, and Dr. Martin Luther King Jr. — many of them are great because they made society uncomfortable with injustices that had been taken for granted,” said Brooks. “They then organized and advocated to make society more just.

“This is a special kind of leadership that is just as important today as it was in the past, and it is critical that we continue to try to understand how to teach and practice it effectively,” Brooks said. “Excellence in the practice of social justice is not merely a meritocratic measure of public leadership, but a moral measure of American democracy. There is no more important a task than the Kennedy School advancing the practice of social justice by those who seek to create a just democracy with vulnerable but empowered communities. That is precisely why I am excited to be joining my Kennedy School colleagues and leading this effort.”

Brooks was most recently visiting professor of social ethics, law, and justice movements at Boston University’s School of Law and School of Theology. He was a visiting fellow and director of the Campaign and Advocacy Program at the Kennedy School’s Institute of Politics in 2017.

Brooks served as the 18th president of the NAACP from 2014 to 2017. Under his leadership, the organization secured 12 significant legal victories, including laying the groundwork for the first statewide legal challenge to prison-based gerrymandering. He also reinvigorated the activist social justice heritage of the NAACP, dramatically increasing membership, particularly online and among millennials. Among the many demonstrations from Ferguson, Mo., to Flint, Mich., during his tenure, he conceived and led the “America’s Journey for Justice” march from Selma, Ala., to Washington, D.C., over 40 days and 1,000 miles.

Prior to leading the NAACP, Brooks was president and CEO of the New Jersey Institute for Social Justice. He also served as senior counsel and acting director of the Office of Communications Business Opportunities at the Federal Communications Commission, executive director of the Fair Housing Council of Greater Washington, and a trial attorney at both the Lawyers’ Committee for Civil Rights Under Law and the U.S. Department of Justice. Brooks served as clerk for the Chief Judge Sam J. Ervin III on the Fourth Circuit Court of Appeals.

In his new role at the Kennedy School, Brooks will be affiliated with the Center for Public Leadership, where former U.S. Undersecretary of State for Political Affairs Wendy Sherman was recently announced as the new director, succeeding David Gergen.

“This nation’s ability to achieve social justice is more relevant now than ever. I am proud that Cornell has chosen to make the Center for Public Leadership his home as he builds this new collaborative and mobilizes others to work in this great cause,” said Gergen.

He is a fourth-generation ordained minister in the African Methodist Episcopal Church.