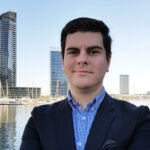 Inside J. Press’s venerable Harvard Square shop, little has changed. Customers browse close-set racks of blazers. Shelves of shirts compete with photos and memorabilia for wall space. Only outside the brick storefront is tradition interrupted. Plastered on the windows are fliers: After 86 years, the iconic men’s clothing store is closing its local outlet.

“J. Press had been in negotiations with the building’s landlord for terms to maintain its current location on Mount Auburn Street, however, the two parties were unable to come to an agreement,” read a statement issued in the name of Jun Murakami, president of J. Press USA to the Boston Globe. “J. Press takes its history at this location very seriously and tried to work for a way to keep it, but given the increasing rents in the area over the past several years, it did not work.” The first-floor space is leased from the Fly Club.

This isn’t the end of J. Press as a company, and it may yet return to the Cambridge area. The apparel company, which is owned by Japanese firm Onward Kashiyama, will still have its flagship New Haven store, its Washington, D.C., shop, and its recently reopened New York City branch, after the Aug. 29 closing of its Cambridge store at 82 Mount Auburn St.

The firm declined to respond to questions about the future of the chain, but the clothier associated with Ivy League style cited these outlets, as well as its jpressonline.com website, as ongoing concerns in its press statement. The company said it “hopes to find a space in the area to reopen in the future.”

According to Daniel Maxton, assistant manager of the Mount Auburn Street shop, “We are out there and committed to making it work in the area, preferably in Harvard Square.” In that post for three years, Maxton will remain with the company after the closing. “Our efforts have really just been focused on reaching out to everyone that we can around Cambridge and closing up the shop in a good way.”

Although J. Press was founded in 1902 on the Yale campus by Latvian immigrant Jacobi Press, its association with Harvard is long and deep. Generations of students have outfitted themselves with its traditional khakis, blazers, and Oxford cloth shirts, while dignitaries, such as the U.S. Supreme Court Associate Justice Stephen G. Breyer, J.D. ’64, and former New Mexico Gov. Bill Richardson (a 2011 Institute of Politics fellow) have been regular customers as well.

That association, like the store’s signature conservative style, is understated. “We don’t carry a lot of Harvard-branded and sanctioned stuff,” says Maxton. “I’d rather have a lot of crimson around, keeping it a little lower key.”

On a recent visit, the store was busy for a steamy summer afternoon. Some of that traffic could be attributed to its ongoing sales. In addition to end-of-season offerings, the shop is giving discounts of 80 percent on selected older stock. Some of the traffic, opined Maxton, is longtime customers coming by for a last visit or to say farewell. “We’re seeing a lot of familiar faces come by, which is great,” he said. “One last hurrah, though we’re sorry about the circumstances.”