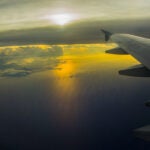 Flight attendants have higher rates of breast, uterine, other cancers

Children and adolescents whose mothers follow five healthy habits — eating a healthy diet, exercising regularly, keeping a healthy body weight, drinking alcohol in moderation, and not smoking — are 75 percent less likely to become obese than children of mothers who do not follow any such habits, according to a new study led by the Harvard T.H. Chan School of Public Health. When both mother and child adhered to these habits, the risk of obesity was 82 percent lower compared with mothers and children who did not.

The study was published online today in BMJ.

“Our study was the first to demonstrate that an overall healthy lifestyle really outweighs any individual healthy lifestyle factors followed by mothers when it comes to lowering the risk of obesity in their children,” said Qi Sun, assistant professor in the Department of Nutrition and senior author of the study.

One in five children in the U.S aged 6 to 19 is obese, and so at risk of diabetes, heart disease, and other metabolic conditions later in life. While it is known that genetics play a role in obesity, the rapid increase of the disease in recent years is likely due to changes in lifestyle and diet, indicating that nurture more than nature is fueling the epidemic.

For this study, researchers focused on the association between a mother’s lifestyle and the risk of obesity among her children and adolescents between 9 and 18 years of age. They examined data from 24,289 children enrolled in the Growing Up Today Study who were born to 16,945 women enrolled in the Nurses’ Health Study II.

The researchers found that 1,282 of the children, or 5.3 percent, developed obesity during a median five-year follow-up period. Maternal obesity, smoking, and physical inactivity were strongly associated with obesity among children and adolescents.

The risk of obesity was also lower among children of mothers who consumed low or moderate levels of alcohol than among children of mothers who abstained. Because so few mothers in the Nurses’ Health Study II were considered heavy drinkers, the researchers could not determine the association between heavy alcohol use and the risk of obesity in children.

To the surprise of the researchers, mothers’ dietary patterns were not associated with obesity in their children, possibly because children’s diets are influenced by many factors, including school lunches and available food options in their neighborhoods.

The findings of this study highlight the crucial role a mother’s lifestyle choices can have on her children’s health and bolster support for family- or parent-based intervention strategies for reducing childhood obesity risk.