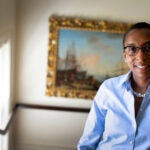 Accomplished businessman and benefactor, he made Spangler Center possible

Harvard Business School alumnus and former member of the Board of Overseers C.D. (“Dick”) Spangler Jr., M.B.A. ’56, died July 22 at his home in Charlotte, N.C. He was 86 years old.

Extraordinarily accomplished in both the private and public sectors, after graduating from Harvard Business School (HBS) Spangler served two years in the U.S. Army. He went on to achieve great success in several industries, including his family’s construction business and banking, chairing the Bank of North Carolina during the 1980s and playing a key role in its merger with the North Carolina National Bank Corp., now Bank of America. Spangler took great pride in recounting that while he was an M.B.A. student, his father was in the School’s Advanced Management Program.

His devotion, generosity, and service to Harvard University and HBS were truly extraordinary. With his wife, Meredith Riggs Spangler, and two daughters, Anna Spangler Nelson, M.B.A. ’88, and Abigail Riggs Spangler, he gave a major gift to the School that made the Spangler Center possible. An HBS professorship, held by William C. Kirby, also bears the family’s name: the Spangler Family Professor of Business Administration at Harvard Business School.

“Throughout his life and career, Dick Spangler epitomized the mission of Harvard Business School, making a difference in the world and in the lives of so many others — a kind and true gentleman whom we will always remember and admire and greatly miss,” said HBS Dean Nitin Nohria. “We were blessed to have him as our dear friend and benefactor for so many years and must continue to live up to the high standards he always expected of us. He will always hold a place of honor in the history of Harvard Business School and in the hearts of all of us who were fortunate enough to know him.”

Always willing to offer his advice and counsel, Spangler served on HBS’s Board of Dean’s Advisors from 1991 to 2011 and as an emeritus member in more recent years. He was a member of the HBS Visiting Committee and its chair from 2001 to 2003. Spangler was co-chair of his 30th HBS reunion gift committee, and from 2002 to 2005 he chaired HBS’ previous Capital Campaign, an effort that raised some $600 million.

In 1988, Spangler received HBS’s highest accolade, the Alumni Achievement Award. In 2005, the University honored him with the Harvard Medal, a special honor for alumni in appreciation of their many contributions to Harvard. He was the recipient of an honorary doctor of laws degree from the University in 2013.

“Dick Spangler was an extraordinary leader who made a difference in multiple worlds,” added Kirby, Spangler Family Professor at Harvard Business School and T.M. Chang Professor of China Studies at Harvard University. “Successful in business, he became a major figure in American higher education. A proud Tar Heel devoted to his undergraduate alma mater, he was an exceptional president of the University of North Carolina. A loyal and generous alumnus of Harvard Business School, he had a transformative impact on our School and campus.

“Dick was a man full of energy, optimism, and imagination. I came to know and admire him when I was dean of Harvard’s Faculty of Arts and Sciences, and he was president of our Board of Overseers at a time that demanded real leadership in Harvard’s governing boards,” said Kirby. “We shared a common passion for China, among other things, and I had the great pleasure of traveling with him and Meredith on two memorable trips across China and Tibet. A more intrepid explorer I have never met, and we exchanged books and essays on China from that time on. After I joined the HBS faculty in 2008, I have been privileged to be the Spangler Family Professor of Business Administration. I can think of no greater honor.”

With a lifelong passion for education, Spangler also oversaw the schooling of more than a million students as chair of North Carolina’s Board of Education from 1982 to 1986. As president of the University of North Carolina, Chapel Hill, from 1986 to 1997, he increased enrollment and faculty funding while prioritizing educational quality and affordability.

In addition to his wife and daughters, he is survived by a son-in-law, Thomas C. Nelson, M.B.A. ’88, and four grandchildren.

In his honor and memory, the flags on HBS’s campus have been lowered to half-staff. For more information, visit the HBS website. A memorial service will be held on Tuesday at 11 a.m. at the Myers Park Baptist Church, 1900 Queens Road, in Charlotte, N.C.