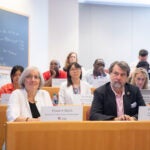 When Samir Mitragotri entered the University of Mumbai as an undergraduate in the late 1980s, there was only one academic option for students in the technology track: chemical engineering.

“None of us really knew what chemical engineering was when we chose to study it, and I was pretty sure I was going to end up working at a petrochemical company,” he says. But when he decided to continue his studies with a Ph.D. at Massachusetts Institute of Technology, he discovered something that would forever change his life: biology. “It was really mind-opening, the idea that engineers have a place in biology, and that there are biological problems that can be addressed by engineers in a unique way.”

“My lab likes to exist at the interface, or boundary, between different disciplines. Over the years I’ve realized many interesting opportunities exist at interfaces that are hard to imagine or know about if you’re working exclusively within the confines of one field. Sometimes there’s a solution waiting for a problem, or a problem waiting for a solution, and those are best matched at that interface,” he says. Given his natural affinity for edges and boundaries, it is fitting that his research centers around biological barriers.

Biological barriers exist at multiple levels in our bodies. The outermost barrier is our skin, which keeps precious moisture (and all of our innards) in and harmful foreign invaders, from viruses to insects to the sun, out. Inside the body, the junctions between the cells that make up our arteries, veins, and capillaries form a barrier that keeps our blood flowing through our vessels rather than seeping everywhere. Our stomachs are filled with acid that kills and dissolves pathogens in our food. And our immune systems function like police forces that recognize, seek out, and destroy harmful bacteria, viruses, parasites, and even cancer cells. Understanding how these different kinds of barriers work, and how to potentially control the flow of molecules across them, is what gets Mitragotri out of bed in the morning.

“We engineers do things in biology that are very different from what biologists generally do. Some of that might be creativity, some of it may be ignorance,” he says, with a laugh. “While biology has traditionally been about observing how things behave in nature, I tell my students that the best way to learn about a barrier is to disrupt it and see how it responds. If we do this with all the barriers, that knowledge bank can form the basis for creating better drug delivery methods. If we know how far we can perturb a barrier without compromising it, that gives us a clue about how best to deliver a drug across it.”

Many pharmaceutical drugs are small molecules taken orally as a pill or liquid, and are absorbed into the body through the gut. The drug landscape, however, is beginning to shift to biological products such as vaccines, gene therapies, and recombinant proteins, all of which would be destroyed by the stomach and must be injected directly. In attempting to bypass the barrier of the gut by injecting them into the blood, however, these drugs run into new enemies: the liver and the spleen, which together form a kind of dynamic barrier that keeps harmful substances out of the body.

“These are the clearing organs; their capillaries are lined with macrophages that are always on the lookout for any foreign substances to get rid of,” explains Mitragotri. “They’re especially good at clearing nanoparticles. If you deliver a tumor-fighting drug encapsulated in nanoparticles to a patient via an IV, less than 1 percent of the drug will actually get to the tumor.”

Motivated by this and other dire statistics, Mitragotri and his team set out to develop a system that could help prevent nanoparticles from being cleared from the blood before they get to their target tissues. They quickly realized that blood cells are naturally able to do all the things that they wanted nanoparticles to do: red blood cells can live for up to four months and travel through the liver once a minute without being cleared; macrophages (or white blood cells) can infiltrate deep into tissues and hone in on sites of inflammation (i.e., tumors); and platelets selectively bind to specific places within the vasculature when injury occurs. Could nanoparticles somehow harness these cells’ special abilities to avoid being cleared from the blood and deliver their drugs more effectively?

Beginning more than a decade ago, Mitragotri and colleagues at University of California, Santa Barbara, attached nanoparticles to the red blood cells of rodents and reintroduced the cells into the rodents’ bloodstreams. Almost miraculously, the rodents’ macrophages ignored the nanoparticles and treated the red blood cells normally, allowing them to remain in the blood rather than being cleared by the liver. “That was the first victory,” Mitragotri recalls.

In his latest paper, published in Nature Communications, Mitragotri and colleagues demonstrated that this hitchhiking method works in multiple organs in mice and pigs, and in whole human lungs, where a full 41percent of the nanoparticles introduced into blood were deposited into the lung. “In this study,” the authors write, “we have advanced the original concept of red-blood-cell hitchhiking from a prototype with modest delivery in mice, to the brink of mapping out the clinical studies.”

In addition to the many potential applications of attaching nanoparticles to red blood cells, Mitragotri’s lab is also investigating hitchhiking them onto monocytes, the cells that differentiate into the macrophages that actively fight diseases like cancer. “Monocytes will eat nanoparticles if you try to attach them directly, so we had to figure out how to overcome that problem,” says Mitragotri.

“We discovered that monocytes care a lot about whether particles are round or disk-like, and hard or soft. It turns out they can’t internalize disk-shaped, soft nanoparticles, so that’s what we made.” The monocytes came after those nanoparticles with a vengeance, as expected, but then simply held them on their surfaces without engulfing them. When the researchers induced monocytes with these “backpacks” to cross an endothelial barrier mimicking a blood-vessel wall, the monocytes carried their backpacks along with them, providing an effective transport method for delivering drugs to their target tissues.

Mitragotri and his colleagues are now using that strategy not only to deliver drugs to a target, but to control macrophages themselves. Macrophages change their physical shape and chemical processes in response to their environment — that’s partly why they’re such good defenders. But tumors have evolved a sneaky mechanism of turning macrophages “off” when they arrive to try to kill the tumor; thus, nearly 50 percent of a given tumor may be composed of dormant macrophages. “We think that with this method, we can deliver the right trigger to the macrophages so that they can be polarized to the right type for fighting different diseases,” says Mitragotri. “We’re still in the very early stages of that in the lab.”