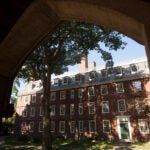 She will assume her new duties on Aug. 15

Claudine Gay will become the next Edgerley Family Dean of the Faculty of Arts and Sciences (FAS), Harvard President Larry Bacow announced today.

A member of the Harvard faculty since 2006 and the FAS dean of social science since 2015, Gay is the Wilbur A. Cowett Professor of Government and of African and African American Studies and is the founding chair of Harvard’s Inequality in America Initiative. She will assume her new duties on Aug. 15, succeeding Michael D. Smith, who will step down after 11 years in the post.

“Claudine Gay is an eminent political scientist, an admired teacher and mentor, and an experienced leader with a talent for collaboration and a passion for academic excellence,” Bacow said in announcing the appointment. “She is a scholar of uncommon creativity and rigor, with a strong working knowledge of the opportunities and challenges facing the FAS. She radiates a concern for others, and for how what we do here can help improve lives far beyond our walls. I am confident she will lead the FAS with the vitality and the values that characterize universities at their best.”

“It is hard to imagine a more exciting opportunity than to learn from and lead the faculty, staff, and students of the FAS,” Gay said. “I am reminded daily that ours is an extraordinary community — diverse, ambitious, and deeply committed to teaching and research excellence. We are all drawn here, each in our own way, by a passion for learning, a search for deeper understandings, and a will to serve the common good. I look forward to working together to advance our shared mission, one never more important than it is now.”

Gay’s research and teaching focus on American political behavior, public opinion, and minority politics, with a particular interest in understanding the political choices of ordinary people and how those choices are shaped by their social, political, and economic environments. Her scholarship has addressed such issues as the relationship of citizens’ trust in government to the racial identity of their elected representatives, the ways neighborhood conditions influence racial and political attitudes, the roots of competition and cooperation between minority groups, and the consequences of housing-mobility programs for political participation among the poor. 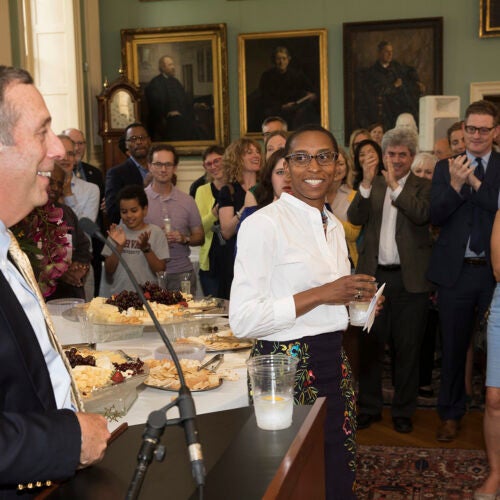 Praise for Gay as a scholar and a leader

Incoming FAS dean’s integrity, ‘rock-solid values’ have made an impression on Harvard colleagues

As dean of social science, she has served on the FAS’ Committee on Appointments and Promotions as well as its Academic Planning Group. A Radcliffe fellow in 2013‒14, she was the government department’s director of graduate studies from 2010‒2015 and is a past member of the FAS Committee on General Education. In addition to leading the multidisciplinary Inequality in America Initiative, launched in 2017, she has served on the steering committee of Harvard’s Institute for Quantitative Social Science and the executive committee of Harvard’s Center for American Political Studies. Her courses have focused on such topics as racial and ethnic politics in the U.S., black politics in the post-Civil Rights era, American political behavior, and democratic citizenship.

“As dean of social science, Claudine has demonstrated superb judgment, wide-ranging intellectual curiosity, and a leadership style that combines strength, aspiration, and compassion,” said Provost Alan Garber. “She is committed to nurturing a vibrant academic environment that brings out the best in our faculty, students, and staff. She truly personifies the values of the Harvard community.”

The daughter of Haitian immigrants to the U.S. — her father was a civil engineer, her mother a registered nurse — Gay spent much of her childhood first in New York and then in Saudi Arabia, where her father worked for the U.S. Army Corps of Engineers. She received her B.A. in 1992 from Stanford University, where she majored in economics and received the Anna Laura Myers Prize for best undergraduate thesis in economics. She received her Ph.D. in government in 1998 from Harvard and won the Toppan Prize for the best dissertation in political science.

Early in her career, Gay served in the Stanford Department of Political Science as an assistant professor (2000‒05) and then a tenured associate professor (2005‒06). In the latter role, she was the department’s director of undergraduate studies and chair of its undergraduate curriculum committee. She was an invited fellow at the Center for Advanced Study in the Behavioral Sciences in 2003‒04.

Widely recognized as one of the nation’s most incisive and imaginative scholars of American political behavior, she was recruited to Harvard as professor of government in 2006. She was additionally appointed as professor of African and African American Studies in 2007 and was named the Wilbur A. Cowett Professor in 2015, when Smith also appointed her as dean of social science.

“Claudine is a thoughtful academic leader who listens generously, delights in the intellectual diversity and energy of our community, and is driven by a deep commitment to our mission of teaching and research excellence and to this institution,” said Smith. “She is an inspired choice, and the Faculty of Arts and Sciences is exceedingly fortunate to have her in this role.”

Active in service to the profession, Gay sits on the boards of both the American Academy of Political and Social Science and Phillips Exeter Academy, while serving as treasurer of the Midwest Political Science Association. In addition, she serves on the fellowship selection committee for the Center for Advanced Study in the Behavioral Sciences, the research advisory council of the American Political Science Association, the APSA presidential task force on women’s advancement in political science, the faculty advisory committee for the Social Science Research Council’s Anxieties of Democracy program, and the diversity committee of Visions in Methodology. She is a member of the editorial boards of both the American Political Science Review and the Journal of Race, Ethnicity, and Politics.

In his message to the community announcing the appointment, Bacow expressed thanks for the advice provided throughout the search. “I am grateful to all of you who took time during the search to educate me about the FAS, which is so central to Harvard’s identity and aspirations,” he wrote. “Provost Alan Garber and I owe special thanks to the faculty advisory committee for the search, whose insights about both issues and nominees were invaluable. And we renew our gratitude to Dean Mike Smith, who has led the FAS for 11 years with a constant devotion to the strength of its programs and the well-being of its people.

“Meanwhile,” Bacow added, “I know Dean Gay will benefit from your ideas, your counsel, your support, and your warm welcome, as she gets ready to move to the second floor of University Hall. Thanks for helping both a new dean and a new president get acclimated to our new roles, at such a pivotal time for higher education.”