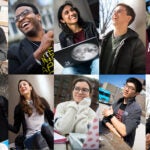 Diversity elevates student group 21 Colorful Crimson: ‘Music is universal and it has no boundaries’

This is the second installment in Learning from Difference, a five-part series on diversity at Harvard.

James Mathew ’21 enrolled at Harvard for many reasons, but being part of a class with no racial or ethnic majority has turned out to be one of the most powerful dimensions of his campus experience.

That recognition prompted him to form 21 Colorful Crimson, a musical group of 21 freshmen of diverse backgrounds and gifts.

“The most important piece of our name is ‘Colorful,’” said Mathew, who is from Hinsdale, Ill., and serves as the group’s president. “It’s truly amazing, the diversity we have.”

Mathew got a first look at how talented his classmates were during orientation week’s freshman talent show. Several performers kept in touch, meeting up for casual jam sessions in the Yard and for meals in Annenberg, where they’d tap out beats on the table.

“It was all casual,” said Mathew. “But I thought, ‘If it works so well when it’s informal, why don’t we make it formal?’”

Over winter break, he formalized his idea with a mission statement. Students sent in audition videos, and 21CC was assembled in February. The group performs a mix of covers and originals, with hopes of eventually recording an album of their own material.

Members have turned their diversity into a strength, said Jenny Baker, a singer from York, Maine, who is enrolled in Harvard’s dual degree program with Berklee College of Music.

“Music is universal and it has no boundaries,” she added. “Everyone in the group has different perspectives and different talents, and when we come together, it’s incredible.”

The group opened for Lil Yachty at Yardfest, and has been hired to perform at events around campus. Mathew said that 21CC’s success owes in equal measure to musical talent and to the contagious energy members bring to shows. “Everyone feeds off it,” he said.

“Being here at Harvard has taken me out of the bubble I grew up in,” he added. “The diversity here has been enlightening for me — to see so many people from different backgrounds. Those interactions are incredible.”

BJ Watson, a rapper and songwriter from Baltimore, heard about 21CC from a friend. He’s excited to see how far their voices carry.

“We’re creating something that hasn’t been done before here,” he said. “One of the best parts is that we’re all freshmen. It just shows how diverse Harvard is becoming. With Harvard’s platform, we can make things that will get out in the world.”