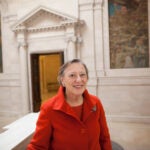 Wilson will be remembered for his scientific work, student mentorship, principled humanitarian and environmental stands, and interdisciplinary connections across the globe. He was also a railway enthusiast, Morris dancer, concertina player, world traveler, and hiker.

Born April 29, 1926, in Putney, England, he studied at London’s Colet Court and St. Paul’s schools, evacuating to Crowthorne by bicycle during World War II. Wilson earned his B.A. and D.Phil. at Christ Church, Oxford. He was a Guggenheim Fellow for postdoctoral work in the U.S. at Rochester University and then Stanford University with Wolfgang “Pief” Panofsky. While at Stanford Wilson met Andrée Désirée DuMond, marrying her after a brief courtship.

In 1952, the couple moved to Oxford University for Wilson’s research lecturer position, and in 1955 to Cambridge, Mass., for a faculty position at Harvard.

Wilson specialized in experimental particle physics, studying the nature of the smallest particles that constitute matter as they collide at very high velocities. He led the upgrade of Harvard’s proton cyclotron to 160 MeV in order to study nucleon-nucleon interactions. With Harvard and MIT colleagues, Wilson designed, constructed, and used the Cambridge Electron Accelerator 6 GeV synchrotron, which, from 1962 on, further probed nucleonic structure.

Wilson was involved in constructing and using the new Fermi National Accelerator Laboratory (Fermilab) in Batavia, Ill., frequently “commuting” there from Harvard, to maintain close contact with students and research. At Fermilab, Wilson continued the study of nucleonic structure with high-energy muon beams. When Harvard’s cyclotron became obsolete for particle research, Wilson helped adapt it for the treatment of cancerous tumors. He also studied electron-positron interactions with the CLEO collaboration at the Cornell Electron Storage Ring. Finally, Wilson joined a research group using the intense polarized beam of the new Continuous Electron Beam Accelerator Facility in Virginia.

Wilson went often to the USSR and Russia, believing that direct cultural and scientific contact was essential to prevent war. After the exile of dissident Soviet physicists, Wilson boycotted USSR conferences, and was an early and visible supporter of Andrei Sakharov. Wilson studied nuclear power safety and environmental carcinogens, such as asbestos. He visited Chernobyl after the nuclear accident, taking a PBS film crew with him. He studied arsenic in drinking water, and was especially proud of starting a program to provide safe, arsenic-free water from a village well in Bangladesh.

Wilson and his wife lived in Newton for more than 50 years. Wilson is survived by his brother Geoffrey; his sisters-in-law Alison Wilson and Adèle Panofsky; his six children, A. Christopher (Rita McMahon), Michael (Lisa Greenleaf), Nicholas (Carol Anne Freeman), Elaine (Brad Farnsworth), André A. (Mary Frances Bond), and Peter (Julie Whitmore); and three grandchildren. He was predeceased by his wife and his brothers Arthur and Laurence.

A memorial service will be held at the Harvard Faculty Club at 20 Quincy St., Cambridge, on June 24 at 1 p.m., followed by a reception.

In lieu of flowers, donations may be made in Wilson’s honor to American Friends Service Committee, Ingersoll Gender Center, or to the Newton Conservators Land Stewardship Fund. Condolences may be posted to the guestbook at www.lehmanreen.com. Lehman Reen & McNamara Funeral Home, 617.782.1000, Brighton, Mass.