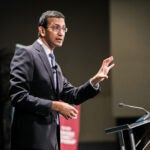 Five faculty members across a wide range of disciplines have been named Harvard College Professors.

“These faculty members bring extraordinary passion and dedication to their work, and I am delighted to announce these appointments,” said Smith. “Their commitment to learning and intellectual energy are qualities that I cherish. I am delighted to recognize these outstanding individuals in the FAS for the impact they have had on the lives and education of our students.”

The Harvard College Professorships were launched in 1997 through a gift from John and Frances Loeb. They are five-year appointments that include extra support for research or scholarly activities, as well as a semester of paid leave, or summer salary.

“Performance is everywhere, it completely surrounds us,” said Bernstein. “Not just in videos, sports, concerts, and television … we perform in our everyday lives, all of us. My goal is for students to understand the complex relationship between race, gender, sexuality, and performance. There is always some sort of relationship, even if it is not straightforward.”

Bernstein was an actor and playwright before shifting to a career as a scholar.

“What I really wanted was to think about U.S. cultural history. I’ve also had a longstanding interest in childhood because you can add persuasiveness to any political argument by claiming it supports children. Ideas about childhood have been crucial to arguments about race since the middle of the 19th century.”

“I grew up under the warming sun of Martin Luther King’s vision and the Civil Rights struggle,” he said. “Too young to directly participate, I was nonetheless galvanized by the struggle, the ideals, and hope of those years for a society freed from the burdens of racism, discrimination, and inequality.”

Bobo specializes in social psychology. Among his popular courses is an undergraduate seminar titled “Race, Racism, and American Politics,” which he will offer again this fall. During spring semester he taught “Introduction to African American Studies” with Alphonse Fletcher University Professor Henry Louis Gates Jr.

“I’ve always been interested in ocean life,” he said. “I’m a scuba diver, I like being in the ocean, and I’m also very interested in mechanics and how things work. So this really combines those two areas.”

At the moment, Lauder is focused on learning from fish. “We want to understand how fish swim so efficiently and effectively, with the goal of using that information to design more efficient robot systems.”

Lauder has incorporated plenty of fieldwork in his classes, including visits to the Charles River.

“Students seem to really enjoy the hands-on aspect of my courses, so I try to offer as much of that as I can.”

Lippit has spent two decades studying the history of Japanese art, with a particular focus on links to Zen Buddhism.

“One of the aspects of teaching the history of art that is particularly rewarding is the special role that exhibitions and the study of objects can play in pedagogy,” he said.

Lippit emphasized that students’ work is critical to driving that process.

“Much of what I do is to stage encounters between students and artworks, and then to work with students to move outward in ever-larger concentric circles toward cultural history, to gain insights into the world that made them. What I’ve found is that, increasingly, students are teaching me how to stage these encounters for others. I’ve enjoyed sharing with students how artistic representation can relate to daily living, religious practice, and philosophical inquiry in the most remarkable and seemingly counterintuitive ways.”

For Wagers, a career in the Department of Stem Cell Regenerative Biology is not merely a profession; it’s personal.

“I was a grad student studying immunology, and I received a call because I was a match for a bone-marrow transplant,” she said. “I got really interested in the field and decided to make it my focus.”

Wagers is particularly interested in the biology of aging.

“People recover from injury slower as they get older,” she said. “I’m really interested in how blood and skeletal systems change with age, and how we can boost the process of recovering from injuries.”

Going forward, she hopes to share her passion for biology with a wider range of students.

“I would love to introduce a general education course for students who are not concentrating in biosciences, but have an appreciation for it and would like to advance their understanding of it.”