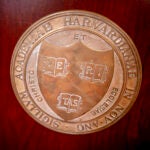 During his first week as a Harvard freshman in the early 1960s, Joe O’Donnell passed the kind of personal test that would resonate for the rest of his life.

Surrounded by his classmates, most of them from well-off neighborhoods and with fathers who were lawyers, doctors, and professors, O’Donnell ’67 introduced himself, without hesitation, as a guy from Everett, the son of a cop.

“Everybody turned around and looked at me,” O’Donnell reminisced on a recent sunny morning in the conference room of his company, Belmont Capital LLC, located in a sleek building overlooking the Charles River. “I wasn’t worried about anything. I was physically the toughest kid in the class. It was a moment of truth, and I decided to be myself, to be truthful.”

O’Donnell has carried that straightforward approach and unassuming demeanor throughout his life, and it has served him well, mostly recently as a Harvard Corporation member. After seven years of service there, he will step down from the post on June 30.

After graduating from the College and then from Harvard Business School (HBS) in 1971, O’Donnell founded the Boston Culinary Group, a food service management company for sports, entertainment, and convention venues, and became a prominent local executive. He is chairman of Centerplate Inc., which acquired Boston Culinary Group, and owner of Allied Advertising Agency, and is considered one of Boston’s most influential people. In 2006, Boston Magazine named him first among “The 100 People Who Run This Town.”

At Harvard, he has long been an alumni volunteer, has served the University on the Allston Work Team and the Harvard College Fund Executive Committee, and has been responsible for organizing his College and HBS class reunions on many occasions. The Harvard College Fund awarded him the Richard T. Flood Award twice, and he won the HBS Alumni Achievement Award in 2005.

O’Donnell also served as an elected director of the Harvard Alumni Association and as an Overseer before joining the Corporation.

“For decades, Joe O’Donnell has been one of Harvard’s most devoted and inspiring alumni leaders. He’s always there when you need him, and he’s one of a kind,” said Harvard President Drew Faust, who also steps down from office on June 30. “Joe has been a terrific member of the Corporation, and I have no doubt he’ll remain an energizing force in the life of the University for years to come. We can’t thank him enough.”

“Joe has been a wonderfully thoughtful, dedicated, and generous alum,” said incoming President Larry Bacow. “His contributions to the Corporation more broadly and to the development of our Allston campus specifically have been invaluable. And while he may be stepping down from the Corporation, I intend to keep him on speed dial during my time as president.”

Harvard Corporation Senior Fellow Bill Lee ’72 agreed with those assessments, noting O’Donnell’s contributions to the Corporation and his helpful counsel, judgment, and connections.

“Everybody knows Joe, and he knows everybody, and everybody adores him. That’s the truth of the matter,” said Lee, who served with O’Donnell on the Board of Overseers and the Corporation. “Joe was uniquely positioned in the Boston community. He helped us build relations with the commonwealth, the city of Cambridge, and the city of Boston, and he did it in a way that no one had done before.”

Scott Abell ’72, former president of the Harvard Alumni Association, president of the Board of Overseers for the academic year 2017–18, and the current national chair of the John Harvard Society, said O’Donnell is one of Harvard’s great treasures.

“Every once in a while, a person comes along and dedicates time and effort to moving the institution forward, and they do it for a lifetime,” said Abell. “Joe is one of those people. Harvard is blessed to have several people like that in recent generations, but it’s unique when you find someone with Joe’s skills, his connections, his insight into the University, and his wise counsel, which is his most valuable contribution. He says what needs to be said, rather than whatever everybody wants to hear. And he never tires of helping.”

Tamara Elliot Rogers ’74, vice president for Alumni Affairs and Development, has known O’Donnell since the early 1990s. “Joe cares deeply about Harvard,” she said. “He’s tireless in his volunteerism. His willingness to engage with many parts of Harvard, to offer advice and counsel to a wide range of Schools in order to make ‘One Harvard’ a reality, and to lift us all, is something for which I and many others are truly grateful.”

O’Donnell credits his parents for laying the foundation for his success in life. They encouraged him to do well in school, do the right thing and stay in line. His father was a police officer of Irish descent, and his mother, a daughter of Italian immigrants and a homemaker, kept a tight ship at home.

Growing up in Everett in the 1950s also helped shape O’Donnell’s outlook and personality. Home then to Italian and Irish immigrant families, Everett was (and is) a blue-collar town. O’Donnell said that environment helped him learn important life lessons.

“Everett was a tough neighborhood in a tough city,” said O’Donnell. “There were a lot of good people there, and if you acted like a jerk, someone for sure would kick you in the ass. It was a great educational experience. It made me tough.”

It also gave him a deep appreciation for the opportunities he got and a down-to-earth demeanor, said William Fitzsimmons ’67, dean of admissions and financial aid. The two bonded over their common backgrounds — in the same class, both were the first in their families to go to college and both were on scholarships. They became close friends.

“Joe always celebrated his background and was never shy about it,” said Fitzsimmons. “In our senior year, our classmates traveled to Europe, and neither Joe nor I had traveled abroad before. We got loans and traveled with them, and while walking around London, he said with a sense of humor, but seriously, ‘Who would have thought that the two of us would be in London as Harvard graduates?’”

O’Donnell excelled as an athlete at Harvard. He was a stellar player on both the football and baseball teams. He earned six varsity letters, and in his senior year he captained the baseball team. To show his gratitude to the baseball program, in 1995 he donated $2.5 million to endow the baseball coach’s position. Harvard’s baseball field bears O’Donnell’s name.

In 2012, O’Donnell and his wife donated $30 million to the University. He is also a leading fundraiser in the Harvard Campaign and development efforts. Giving back to Harvard, he says, is a responsibility.

“It’s payback,” O’Donnell said. “I got a scholarship because someone was smart and thoughtful enough to provide for a guy like me. I wasn’t a dumbbell, but I wasn’t the traditional blueblood. I got a break to go to Harvard. I want others to have a break. I do it because of a selfish reason: It feels good to make a difference.”

O’Donnell also gives back to Malden Catholic High School, which he also attended on scholarship.

“Joe is deeply concerned about the welfare of others,” said Thomas Doherty III, headmaster of Malden Catholic. “He’s exceptionally generous to us and wants us to be successful. He is deeply committed to Everett, his hometown. We have a lot of students from Everett. And despite all of his successes, he still understands where he came from, and he is supportive of the students who come from Everett.”

Of all his philanthropic efforts, the one that is closest to O’Donnell’s heart is the Joey Fund, which he and his wife, Kathy, started to honor the memory of their son, also named Joe, who died at 12 of cystic fibrosis, a genetic disorder that affects the lungs and for which there is not yet a cure.

“My No. 1 passion is trying to find the cure for cystic fibrosis,” said O’Donnell. “My dream is to live long enough to see it happen.”

As for his long ties to Harvard, O’Donnell said he plans to keep them alive and support the University in any way he can. After all, he said, Harvard changed his life by giving him opportunities to excel in academics and athletics, along with a plethora of connections, all of which helped him succeed.

“I do what I do because of Harvard. That’s why I keep supporting it.”