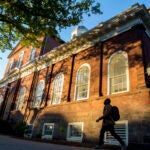 Getting comfortable outside their comfort zones

Instagram series asks students to talk about anything but their studies

According to polls conducted last year by the Pew Research Center and The Wall Street Journal/NBC News, many Americans are souring on higher education. There is a concern among many that college is becoming an opportunity limited to the privileged, and a growing sense that the expense doesn’t justify the return. Other detractors paint colleges as anti-American barracks in the culture wars.

Harvard is perhaps the best-known institution of higher education in the U.S., but with that popularity comes a vulnerability to stereotypes.

Harvard students are some of the brightest and most ambitious, but they are still regular people who need to relax and pursue interests outside of school. Harvard’s new Instagram series, #HarvardUnwind, seeks to showcase that lighter side of the student body. Students like music and TV that they are reluctant to admit to. They have profound thoughts but also puzzling pet peeves, and, just like anyone who has been working hard, they are eager for an excuse to take a break.

Q: How do you take a break?

“I like to run, I’m actually going to go on a run later today. It’s very therapeutic, and there are a lot of really nice running routes around here. Like Fresh Pond, down the river. There’s a castle all the way down in Somerville. It’s just a way to stop thinking about things.”

Q: If Harvard had a smell, what would it be?

“Mulch. It doesn’t smell like mulch ever, really, but when I came for Visitas, I think they redid the mulch. I came in through Agassiz, and they have really good landscaping, so I think they had fresh mulch. So that was the first thing I smelled here, and now every time I smell mulch I’m just like [inhales], ‘Ah, Harvard.’ ”

Q: What’s a strong opinion you have about something trivial?

“I get furious if someone doesn’t tell me that they are going to cut their hair before they get a haircut. Because I’m being affected the most by having to watch you have different hair. That’s jarring. I should at least get a warning.”

Q: What blows your mind?

“There are a few languages in the world that use clicks in them, and that phoneme is a remarkably easy one to produce. Everyone can do it; children will do it automatically when they’re growing up. Yet it’s only found in a few thousand native speakers. So that’s kind of mind-blowing, to wonder why don’t more languages have clicks in them.”

“Probably occasionally listening to pop music because I claim to be a very big alternative fan — which I am — but we all have our moments. I generally go to throwbacks, so pretty much anyone who was singing in the early/mid-2000s, that’s great: Britney, Demi Lovato, Jonas Brothers, the fun stuff.”

Q: What’s taking up too much of your time?

“That’s a really difficult question because I’m such an organizer. I really delegate well. So, I guess I would have to say sleep. I wish I could get less of it, but I have to have nine hours in order to be able to function. I work over at St. Peter’s School in Cambridge, so I’m up at 6:30.”

Q: What’s something you’re interested in that most people don’t know about?

“I went here for undergrad; I studied comparative religion. Now I’m in the Law School, and I want to be a minister. Most people don’t see the connection there. I think law and religion have a lot of things in common, basically in how you interpret the text, whether you use the literal meaning or you use context to imbue meaning into that text, whether reading either a statute, or a contract, or a holy text. I think that’s really cool.

“So, in practical use, I really want to be a minister of a church, but I also want to run non-profits off of that. There’s a lot of laws surrounding what a non-profit can or can’t do, and so the ability to manipulate those laws in order to do more good is where the Law School comes in. But also, there’s a lot of moral issues that law can’t fix. So, in order to fill in those holes, I think religion gives you that morality to fix.”

Unfortunately, the subject matter of this interaction lapsed before the roll out of #HarvardUnwind could be finalized, and was not posted to Instagram.

“My room in Cabot, hands down. I meditate there. I really like decorating, so I took my time. I’m very proud of it. I have my plants. I dunno, I just try to make it a space where I feel really at home: very warm.”

Q: What’s something you loved as an undergrad that you never thought you’d give up?

“I was a drummer. I had a band, I was kind of a drum teacher, and I had performances every weekend. But now I totally lost all of that. I never play drums anymore.”