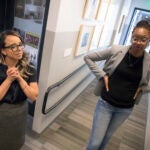 Local teachers get an education in addressing hard questions

Professor, city of Boston official see opportunities for residents, leaders to learn from one another

For the first time in human history, city dwellers make up the majority of the world population, a trend that Professor Edward Glaeser examined in a talk at the Harvard Ed Portal in Allston earlier this spring.

Glaeser, the Fred and Eleanor Glimp Professor of Economics in the Faculty of Arts and Sciences, is the creator of CitiesX, a free course on the EdX platform. Before an in-person crowd of 60 and a live-stream audience of 8,700, he made the case for the benefits of urbanization, and outlined how urban leaders in the U.S. and around the globe can learn from one another. He was joined by Brian Golden ’87, director of the Boston Planning and Development Agency (BPDA), who discussed how the city is aiming to make the most of lessons learned in the face of ongoing challenges.

The shift to cities has been “an incredibly good thing,” Glaeser said.

“If you compare those countries that are more than 50 percent urban to those that aren’t, the more urban countries have an average income that is five times as high and an infant mortality level that is less than one-third,” he said. “The success of cities in the 21st century — the urbanization of the world — reflects a very deep connection between urban density and what it means to be human … Miraculous things happen when human beings learn from one another. That’s what cities do.”

He acknowledged that urban living can come with downsides, such as overcrowding, health issues, traffic, housing challenges.

“But I’m convinced that the right response to this is not to say that people should stop moving in, but instead to make sure that our governments are able to deal with the downsides — to promote free-flowing traffic, to build enough to allow middle-income people to move in, to have public health policies that fight against contagious disease.”

Golden, a lifelong Allston-Brighton resident who has headed the BPDA since 2014 and served the neighborhood as a state representative from 1999 to 2005, said Boston is making progress by addressing challenges head-on.

“We often use a quote at the BPDA: ‘Great cities are not born, they’re made.’ They’re the product of actual choices,” he said.

The pair discussed the need for housing stock that is diverse in cost, size, type, and location.

“We at the BPDA, as well as the mayor, are pro-growth, pro-development, as long as it continues to support the needs of Bostonians all along the socioeconomic spectrum,” Golden said. “Growth is important for all Bostonians. This city is having an unprecedented population growth. … A lot of people want to live here. That’s a good thing, a vote of confidence and something we should be proud of. People want to live here because it’s a great place to live. But we need more housing stock, and if we don’t build more housing stock, there becomes an even more acute bidding war for rentals and ownership opportunities.”

The event included a Q&A session in which concerns were raised about the impact of climate change and sea level on coastal cities. Leaders in Boston have maintained a steady focus on climate issues, Golden said.

“We’re thinking of everything from building berms along the water’s edge, or even sea walls that can form a barrier against rising tides and storm surge,” he said. “Some fixes will come sooner than others, but we know that the health and well-being of the people of Boston and the region depend on us making really smart choices.”

Adaptability is critical to the future of cities, Glaeser said. Different situations call for different approaches — Boston’s challenges are different from Houston’s — but the need for cities to remain centers of opportunity for all residents is what will ensure their individual successes, he added.

The discussion in its entirety can be found here.