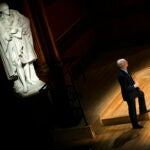 IT for social justice

By several measures, including rates of poverty and violence, progress is an international reality. Why, then, do so many of us believe otherwise?

In a series of studies, Gilbert, the Edgar Pierce Professor of Psychology, his postdoctoral student David Levari, and several other researchers show that as the prevalence of a problem is reduced, humans are inclined to redefine the problem. As a problem becomes smaller, conceptualizations of the problem expand, which can lead to progress being discounted. The research is described in a paper in the June 29 issue of Science.

“Our studies show that people judge each new instance of a concept in the context of the previous instances,” Gilbert said. “So as we reduce the prevalence of a problem, such as discrimination, for example, we judge each new behavior in the improved context that we have created.”

“Another way to say this is that solving problems causes us to expand our definitions of them,” he said. “When problems become rare, we count more things as problems. Our studies suggest that when the world gets better, we become harsher critics of it, and this can cause us to mistakenly conclude that it hasn’t actually gotten better at all. Progress, it seems, tends to mask itself.”

The phenomenon isn’t limited to large, seemingly intractable social issues, Gilbert said. In several experiments described in the paper, it emerged even when participants were merely asked to look for blue dots.

“We had volunteers look at thousands of dots on a computer screen one at a time and decide if each was or was not blue,” Gilbert said. “We lowered the prevalence of blue dots, and what we found was that our participants began to classify as blue dots they had previously classified as purple.”

Even when participants were warned of the tendency, and even when they were offered money to avoid it, they continued to alter their definitions of blue. Another experiment, this one using faces, showed similar results. When the prevalence of threatening faces was reduced, people began to identify neutral faces as threatening.

Perhaps the most socially relevant of the studies described in the paper, Gilbert said, involved participants acting as members of an institutional review board, checking research methodology to ensure that scientific studies were ethical.

“We asked participants to review proposals for studies that varied from highly ethical to highly unethical,” he said. “Over time, we lowered the prevalence of unethical studies, and sure enough, when we did that, our participants started to identify innocuous studies as unethical.”

“If the ER is full of gunshot victims and someone comes in with a broken arm, the doctor will tell that person to wait,” he said. “But imagine one Sunday where there are no gunshot victims. Should that doctor hold her definition of ‘needing immediate attention’ constant and tell the guy with the broken arm to wait anyway? Of course not. She should change her definition based on this new context.”

In other cases, however, prevalence-induced concept change can be a problem.

“Nobody thinks a radiologist should change his definition of what constitutes a tumor and continue to find them even when they’re gone,” Gilbert said. “That’s a case in which you really must be able to know when your work is done. You should be able to see that the prevalence of tumors has gone to zero and call it a day. Our studies simply suggest that this isn’t an easy thing to do.”

Aside from the obvious questions the research raises about problem-solving, it also suggests challenges with how we discuss, debate, and address societal ills.

“Expanding one’s definition of a problem may be seen by some as evidence of political correctness run amok,” Gilbert said. “They will argue that reducing the prevalence of discrimination, for example, will simply cause us to start calling more behaviors discriminatory. Others will see the expansion of concepts as an increase in social sensitivity, as we become aware of problems that we previously failed to recognize.