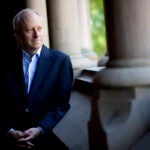 The Library of Congress announced today that it will award to Harvard President Drew Faust the John W. Kluge Prize for Achievement in the Study of Humanity. The $1 million international prize recognizes individuals whose scholarship in the humanities and social sciences has shaped public affairs and civil society, highlighting researchers who have had a major impact on social and political issues through work conveyed beyond the academic community.

“The Library of Congress is thrilled to recognize Drew Gilpin Faust for her extraordinary work researching, writing, and teaching about the fabric of American life,” said Librarian of Congress Carla Hayden. “Through her extensive writing about Southern identity, she has explored themes of deep relevance to our national conversation on race and gender. As the first female president of Harvard University, she has also led one of the most esteemed educational institutions in the world through a period of intense growth and transformation.”

Faust will receive the award during a gala ceremony on Sept. 12 in the library’s Great Hall.

On July 1, Faust steps down as Harvard president following more than a decade of transformative leadership. Since her presidency began in 2007, she has fostered “One Harvard,” an academic and operational collaboration among Harvard College and the University’s graduate and professional Schools; opened Harvard’s community to new and diverse populations; advanced the University’s educational mission in the arts, sciences, engineering, and the humanities; placed new emphasis on innovation in learning and interdisciplinary programs; expanded the institution’s global footprint; and modernized governance and administrative structures.

“I am deeply honored to receive the Kluge Prize and would like to thank the Library of Congress for this recognition and for the vital mission it pursues on behalf of our nation,” said Faust. “The humanities and social sciences have never been more important to our understanding of society and the increasingly connected world we inhabit. They allow us to see the world through the eyes of others, to understand the common hopes and aspirations we share, to cultivate judgment and discernment, and to identify and pursue the questions that must animate our pursuit of a better future.”

Faust was selected from a short list of finalists following a nomination process engaging scholars and leaders from around the world, and a subsequent three-stage review by experts inside and outside the library. Administered by the Kluge Center in the Library of Congress, the award reflects the center’s mission to “reinvigorate the interconnection between thought and action,” bridging the gap between scholarship and policymaking.

Recent winners of the prize, which is awarded on a semi-regular basis, include the philosophers Jürgen Habermas and Charles Taylor in 2015, and Fernando Henrique Cardoso, former president of Brazil, in 2012.